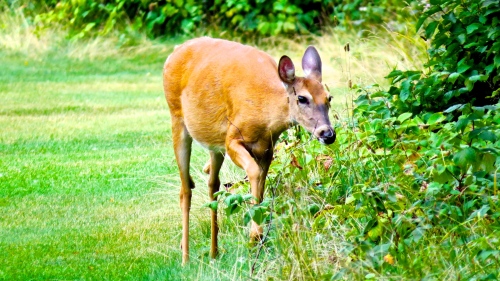 We saw so many deer! On our recent golfing holiday at Lake of the Sandhills at Buffalo Point we saw an abundance of  white-tailed deer on the course.

I suspect at times my golfing companions thought it was time for me to put down my camera and concentrate on my golf game. But the deer were so fascinating and beautiful .

I was surprised we saw so many deer since I had read that our bitterly cold winter in Manitoba had been tough on the deer killing 30%-40% more of the population than during a normal winter. 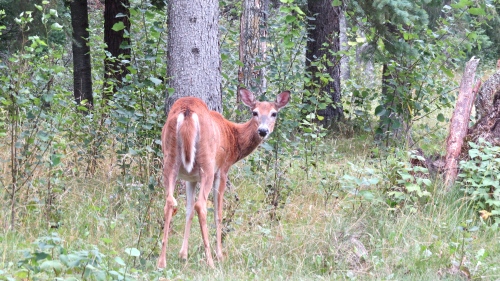 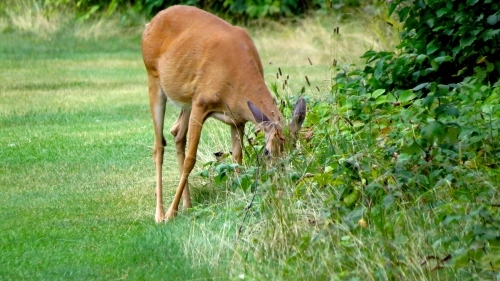 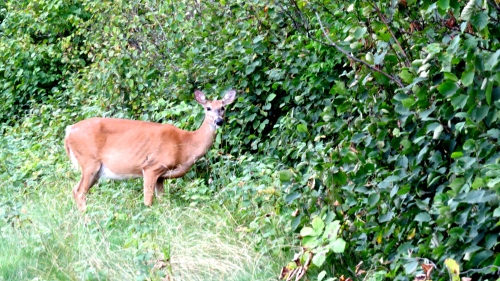 We were lucky to see so many deer since apparently they are primarily nocturnal. They graze at dawn or dusk and only occasionally venture out in daylight hours.

The fallow deer keep
Delicate and far their counsels wild,
Never to be folded reconciled
To the spoiling hand as the poor flocks are;
Lightfoot, and swift, and unfamiliar,
These you may not hinder, unconfined
Beautiful flocks of the mind.

Other posts about animals on golf courses…….
Guess What I Saw On  A Golf Course In Mexico

We’ve been golfing the last two days at Lake of the Sand Hills Golf Course at Buffalo Point on Lake of the Woods with our friends Rudy and Sue.

The scenery on many of holes is spectacular. 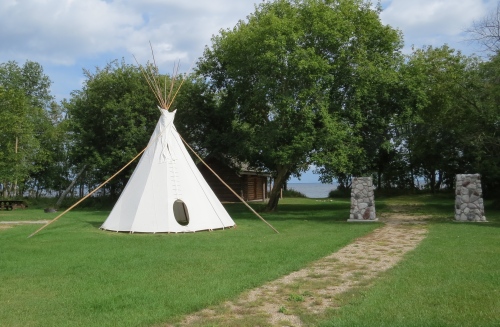 where the local Ojibwa traded their furs for guns, traps, cloth and beads.

David Thompson the famous Canadian explorer and mapmaker charted the area on a map in 1825. Par-pe-qua-wungar-Sakahagan, the Ojibwa name for the south basin of the present Lake of the Woods is clearly marked on the map. The translation of the Ojibwa designation is Lake of the Sand Hills explaining why the golf course bears that name.  The name comes from the fact that there were extensive deposits of sand around the lake.

and even the tiles on the walls tell the natural history of the area.

Lake of the Woods and the birch and pine forest provide a stunning backdrop for the course.

We golfed on Thursday and spent the night at my brother and sister-in-law’s cottage at nearby Moose Lake where we had a steak barbecue and taught our friends how to play the card game euchre.

Our Friday round of golf was near perfect.  No wind, no mosquitoes, no rain,  temperature not too cold and not too hot, and we had the course to ourselves. We did not encounter any other golfers our whole round.

Golfing at the site of a former Hudsons Bay trading outpost was a great experience. I look forward to golfing there again.

Other posts about our friends Rudy and Sue…..

A Sound Track For Daily Living

Accordian player on the train in Madrid

Cellist on the street in Kiev Ukraine

My husband and his friend Tad singing karaoke in Hong Kong

Other posts about music…….

Tagged as musicians around the world 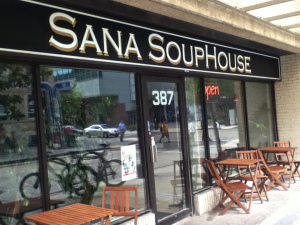 I stopped in at the Sane Soup House on Graham Avenue last week when I needed a quick lunch.

Nice seating area for casual eating or there are regular tables. My waitress was friendly and the service quick. 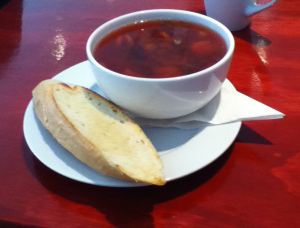 I had a delicious bowl of beet borscht from the menu.  It was hard to choose because the Wild Mushroom, African Peanut and Chilled Strawberry soups also sounded intriguing.

There’s a cool mural of the Provencher Bridge at night on the back wall and an old fashioned cooking stove is also part of the decor.

They have tables outside  if the weather is fine and something I always look for- a place to park your bike. I’ll be going back to this restaurant since it is right on the route from my home to the art gallery where I work .

Other posts about Winnipeg restaurants……..

I Need To See A Happy Movie

I saw two movies in the last two days and they both made me incredibly sad.

Calvary is about a priest who knows someone is going to kill him in a week. The priest is a good man but he has been selected to ‘pay the price’ for all those priests who have used their position for evil.  There are lots of characters in this movie with sad, lonely,messed up lives living cynically or hopelessly. The priest does his best to be patient and listen to them.

At one point the priest is praying with a woman who has just lost her husband in a senseless accident involving drunk teenage drivers. The priest remarks that it must be hard for her to accept how unfair life is in the face of her tragedy.  The woman says what happened to her husband isn’t unfair, it was just something that happened. She says that what is really unfair is people who die who aren’t loved, who die without meaningful relationships. She and her husband loved each other so that didn’t happen to him.

It made me incredibly sad to think about how many isolated, lonely people there are like that in the world.

Boyhood is a film that was shot over a period of twelve years by the same cast.  You see a boy become a man in a little under three hours.  Viewers get a window on all those small seemingly mundane but meaningful moments in a family’s day-to-day existence, that quickly pile one on top of each other moving life along in a quick blur. I started crying when the mother in the movie is sending her youngest child off to college and can’t believe she has really arrived at this moment.  Where has time gone? Where has her life gone? And really is this all there is to life?  She has invested so much in her children and now they don’t seem to need her anymore. I think probably every mother has had a sad moment like this. The movie reminded me of how quickly our lives move along and end.

Both Calvary and Boyhood are very good movies. They make you think. They trouble you. They make you take stock of your own life. They make you cry. I’m glad I saw them. But the next movie I see definitely needs to be funny, light-hearted and very upbeat!

Other posts about movies………

My Dad Was Once A Teacher 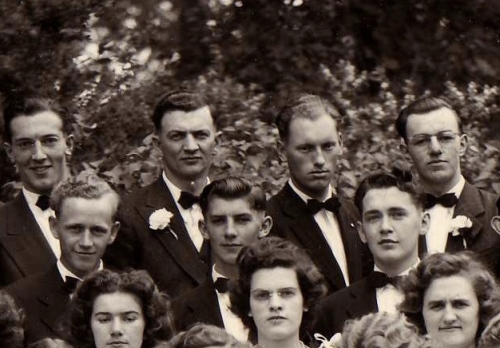 Although my father Dr. Paul Peters enjoyed a long career as a family physician, his first job was not in medicine, but education. He was a permit teacher.

Manitoba employed permit teachers during the 1940s and 1950s. They were new high school graduates hired for one year, to fill vacant teaching positions in the province. There was a shortage of educators because of the many male teachers who had gone to serve overseas in World War II, as well as women who had left the profession to assume jobs vacated by soldiers. 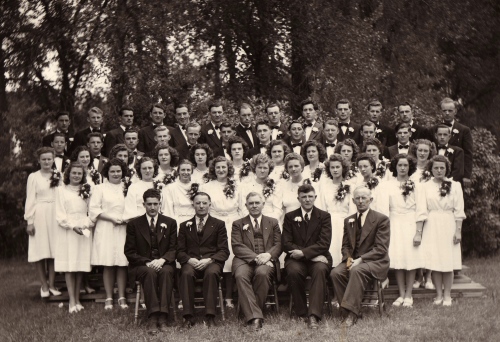 When Dad graduated from Gretna’s Mennonite Collegiate Institute (MCI) in 1947 he agreed to take a permit teaching position. His only training was a six- week summer course at the Normal School in Winnipeg. Here he was introduced to basic teaching methods, shown how to write lesson plans, and was taught square dancing, a skill he never got to use in the small conservative Mennonite community of Silberfeld where he was hired for $90 a month and given the use of the two room teacherage. He had thirty- four students from grades one to seven and a grade nine correspondence student to supervise. After Easter three little kindergarten students were added so they could get introduced to school before beginning grade one the following year.

Besides teaching reading, spelling, math, writing, history, science, religion and German, Dad had to stoke the stove with coal on winter mornings to warm up the schoolhouse. He needed to attend to this early enough so the ink in the ink wells could thaw before the students needed it.

Dad’s first task after firing up the stove was to write the assignments for each grade on the chalkboard, except the group first on his teaching agenda for the day. That way the other students were kept busy while he worked his way through the rotation of all the grades.

Although twenty- five of his thirty-four students consisted of a pretty lively group of boys, Dad told me discipline wasn’t really a problem. He decided on the rules for the classroom together with his students. Sometimes he made kids shovel snow or stay after school as a consequence for misconduct. He does remember spanking one boy who didn’t follow the rules. The young man’s father came to see Dad the next day and told him not to waste his time spanking his son. He knew from experience that it didn’t help.

It was too far for Dad to always go home to his parents in Gnadenthal on the weekends but sometimes he walked the ten mile round trip to Gretna or Altona to visit friends. Dad started out cooking his own meals in the teacherage, but then a Mrs. Brown who lived nearby invited him for supper one night and told him she’d be happy to make his dinner for 25 cents a day. He figured it was a good deal. In spring he organized inter-school soccer and baseball games with his fellow MCI graduate Mary Regehr who was permit teaching in Gnadenfeld.

Although an inspector came around a couple times to check up on Dad he was basically on his own. Dad still has a copy of the final report that he had to send in to the Department of Education in June of 1948. He has very good memories of his permit teaching year and looking back marvels how he was a hundred percent confident that he could do the job right from the start. 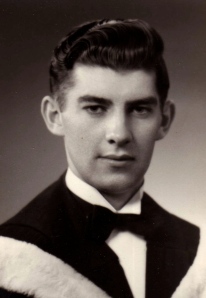 Dad when he was in college

Dad did consider a long- term teaching career, but after landing a part time job as an orderly at the Misercordia Hospital in Winnipeg during his college years, decided he was more interested in medicine.

At one time Manitoba had as many as 250 permit teachers. They served an important role in keeping the province’s education system functioning during challenging times.

Other posts about my Dad…….

Thanks Mom and Dad

This box of embroidery hoops was in the donations pile at the Thrift Shop the last time I worked there. I took a photo because the hoops reminded me of my grandmother. My Grandma Peters did embroidery and she taught me how to embroider too. 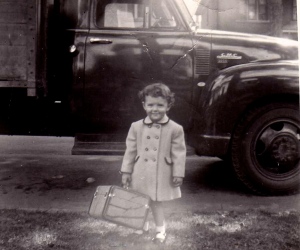 On a few occasions I had the chance to go to her house in Gnadenthal for a visit on my own.  This was a special time because I had Grandma to myself instead of sharing her with my fourteen cousins and three siblings.

My Grandma and Grandpa Peters

Those embroidery lessons with Grandma are a positive memory because I enjoyed her company and attention and learning to embroider taught me patience and perseverance.

I have a piece of Grandma’s embroidery as a keepsake. I keep it on my bedroom dresser as a reminder of the many good life lessons Grandma taught me.

Other posts about my grandmother…….

My Grandmother was a Guitarist