Salvador Dali is coming to the Winnipeg Art Gallery! September 27 marks the debut of two exhibits that will feature some of his major works.  I think the famous Spanish artist will hold unique appeal for the children I take on tours of the gallery.

Dali was very open about including the things that scared him in his work. Children will identify with that.  Dali was petrified of ants. As a small child he had a pet bat and one day he discovered its dead body covered in ants. He also saw a number of dead birds and a dead lizard being eaten by ants. He never forgot those experiences. One way he confronted his fear of ants was to include them in his paintings.  Dali’s Ace of Diamonds will be in the upcoming exhibition at the Winnipeg Art Gallery.  In Dali’s surreal rendition of the playing card there is an ant crawling across the face of the clock between the numbers eleven and twelve.

Another way Dali dealt with his fear of ants was to have an anteater as a pet.  TV host Dick Cavett recalls  the time Dali brought his pet anteater onto his talk show in this interview.

Children all have fears. I was scared of dogs as a child. My son was petrified of spiders. I have a friend who found clowns at a circus terrifying and most children have nightmares that frighten them. I think children will appreciate being introduced to an artist who had fears just like them and admitted them via his artwork. After we look at some of Dali’s fears on canvas and I ask children who come to the gallery, “What are you scared of?”  I may not have enough time to hear all their answers.

Other posts about Dali…….

Other posts about Spanish artists and art…..

Visit to the MOMA

Tagged as art and children's fears, dali and his anteater, dali fear of ants, salvador dali

I was first introduced to the work of Salvador Dali when I was assigned to chaperone a high school art trip to Spain in 2008. To prepare I learned about the Dali paintings we would see in Madrid and Barcelona.  Since the trip was designed for art students we were looking at the technical aspects of Dali’s work and I learned to appreciate them. But I was pleased that on my recent visit to the Dali Museum in St. Petersburg, Florida I was introduced to a more personal Dali and was able to learn more about his personal life and how it impacted his work. 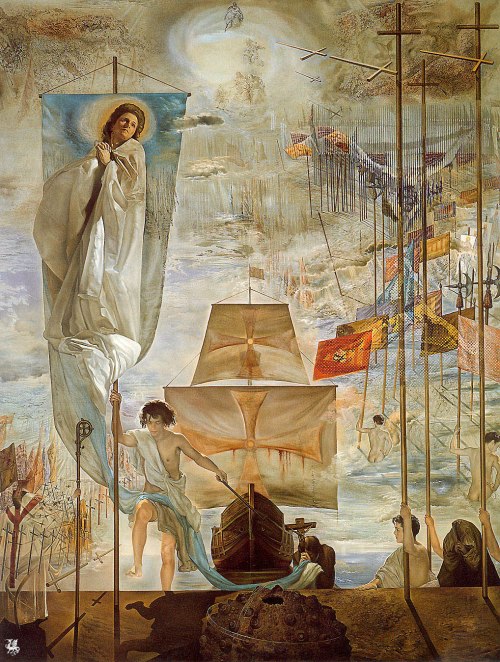 The Discovery of America by Christopher Columbus- Salvador Dali-1959

Dali’s  Russian born wife Gala figures prominently in so many of his paintings.  In this one she poses as the Virgin Mary on a flag being carried by a young Christopher Columbus. Gala was ten years older than Dali and married to another man and was the mother of a daughter when she met the artist. They married in 1934 after her divorce. Gala left her daughter to marry Salvador. Dali said Gala was his muse and inspiration and he sometimes signed both their names to a painting.

Dali created this portrait of his fifteen year old sister Ana Maria in 1924 when they had a good relationship and she often acted as his model.

Later Dali altered the portrait so it looked like a sort of a playing card with a distorted and haggard looking version of his sister painted upside down on the lower half of the canvas.  This reflected Dali’s changed relationship with his sister. After Dali published his autobiography in 1941- The Secret Life of Salvador Dali Ana Maria published her own version of her brother’s life called Salvador Dali As Seen By His Sister.  In her story she refuted much of what he’d said about his childhood in his own book and she was very critical of his marriage to Gala. 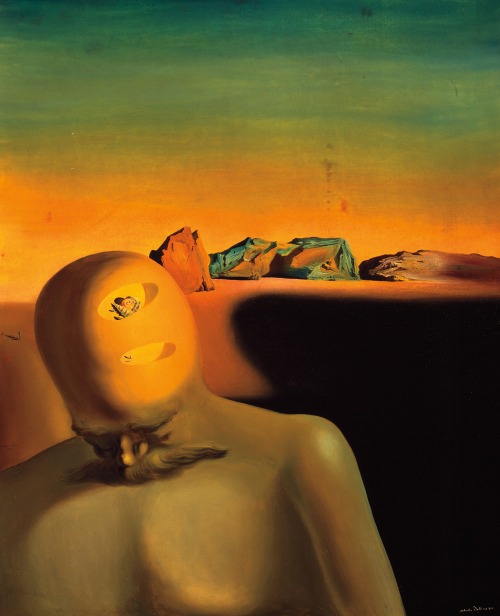 The Average Bureaucrat by Salvador Dali – 1930

This painting of Dali’s father shows how their relationship changed.  The bureaucrat is Dali’s father.  As a defiant young man Dali sought ways to challenge and shock his father. After Salvador married Gala his father banished him from the family and disinherited him in his will. He depicts his father here with his eyes closed and his head down, uninterested in the world. He has no ears to hear and is empty-headed save for a few shells and pebbles. A tiny image to the left of the bureaucrat’s head shows a father and young son holding hands -a sign that in his childhood Dali and his father were close.

There were images of Dali’s childhood nanny Llucia in several of his paintings in the Dali Museum in St. Petersburg. In one piece The Weaning of Furniture Nutrition he shows how after he grew up and was ‘weaned’ from his nanny’s loving care it left a hole in his life that required a crutch to provide the support previously given by his nanny. In describing this work Dali said, “the absence of a beloved person leaves a sentimental void.”

This painting done during World War II was meant to show the growing importance of the New World/the Americas while Europe is being crushed by the hand of the man in the painting. World War II brought about a new world order but it involved a great deal of bloodshed. Besides its political interpretation however this work is also personal because it shows a new Dali emerging in America. He and his wife moved to New York in order to escape Europe during World War II and Dali became involved in all kinds of new art forms including advertising and film.

The Dali Museum in St. Petersburg holds the largest collection of Dali’s work outside of Spain. It is a good place to learn not only about Dali the artist, but also Dali the man.

Other posts about art gallery visits……

The Chicago Institute of Art