I’m not a huge football fan but our friends Rudy and Sue came to visit us here in Gold Canyon and that made our Super Bowl weekend lots of fun. Rudy and Sue actually introduced us to the Gold Canyon area of Arizona last year when they invited us to be guests in the home they had rented. This year they have a place in Palm Desert and we were glad they were willing to make the four-hour trip to Phoenix to spend a few days with us.

Friday night we caught up on visiting and ordered pizza from the Hitching Post restaurant. Dave and Rudy took their bikes to pick it up and had to chase off a few coyotes in the dark on the trip home along the paths of the nearby golf courses. I guess the coyotes wanted some of that pizza! 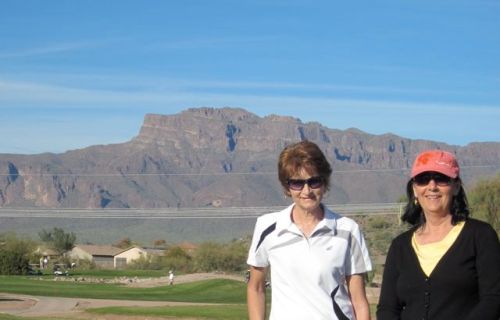 Saturday morning Sue and I went for a long walk to work off the bacon and eggs we’d had for breakfast.

After lunch we were off to Mountain Brook Golf Course for eighteen holes.  Although I don’t keep score I had lots of good shots and that made the round enjoyable for me. It didn’t hurt that the weather was perfect and the views spectacular. We barbecued steak for supper. 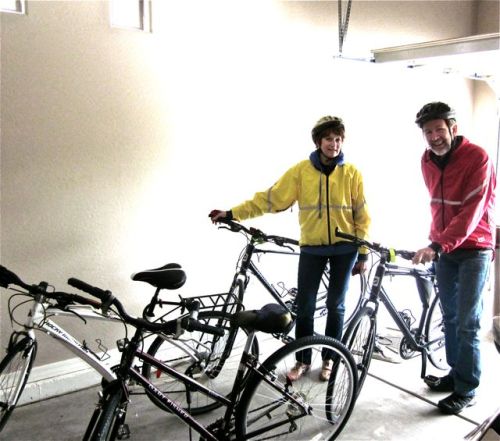 Rudy and Sue had brought their bikes along and so Sunday morning we all set off for a ride. We stopped to pick up a New York Times for Dave so he could do the crossword and then headed over to our favorite little coffee shop.

We discussed American politics and the upcoming Super Bowl Game over breakfast. I admitted I knew little about the game except I’d read an article about the two coaches who are brothers. They’ve credited their father with teaching them football skills and their mother for giving them the strong sense of family loyalty that allows them to remain good friends despite the fact they are competing against each other. I also knew that Michael Oher the football player they made the movie Blind Side about, was going to be playing for the Baltimore team.

When we got home we watched Sunday Morning, a news show Rudy and Sue introduced us to last year and we have watched faithfully ever since.  Dave had recorded it while we were on our bike ride. It had lots of Super Bowl stories and I particularly enjoyed the piece about Charles Fazzino, the Super Bowl Artist in Residence.  Who would have guessed the Super Bowl had its own official artist?

Without a doubt Rudy was the most involved viewer during the game. He was wearing his NFL jersey and we gave him a bit of a hard time because he predicted a 49ers’ blow out and after the first half the Ravens were so far ahead and then they scored another touchdown just as the second half started. Rudy got his hopes up when San Francisco made a huge comeback after a power surge in the New Orleans stadium shut the game down for nearly half an hour.  I think he was a little disappointed in the Ravens ultimate victory, although Sue and I said it is always kind of nice when the ‘underdog’ wins unexpectedly.

The game went on for so long because of the power outage delay that it was nearly 9 pm. by the time we sat down to eat the chili Dave had set simmering hours before and almost 10 by the time we polished off the pineapple- upside- down cake I had baked.

In the morning Rudy and Sue set off for Palm Desert after breakfast. Their children as well as some other guests were arriving for a visit this week and they needed to get home and get ready for that. We won’t see them again till April when they return to Manitoba. It was nice to spend the Super Bowl Weekend with friends.

A Sound Track For Daily Living