Multitasking- Wisdom From A Former Student

Jenelle Law one of my former high school students has made a great video about multitasking. Jenelle is currently studying graphic and media design at the University of the Arts in London. Her video really struck a chord with me. It catalogs the downside of multitasking.  Click here to view the video.

If I flit from one thing to another I don’t get nearly as much accomplished as I do if I tackle one task at a time. It’s tough though because while I’m writing a series of devotionals my middle-grade novel manuscript is calling out to me. When I’m working on an assignment for my online art education course I’m also itching to get at another blog post.  As I hurry to get my newspaper column in by deadline I wish I could be working on the latest story I’m writing for my grandson. So I tend to dabble in too many projects at once and since I’m working on my computer I check on Facebook and my e-mail in between. Not very productive! 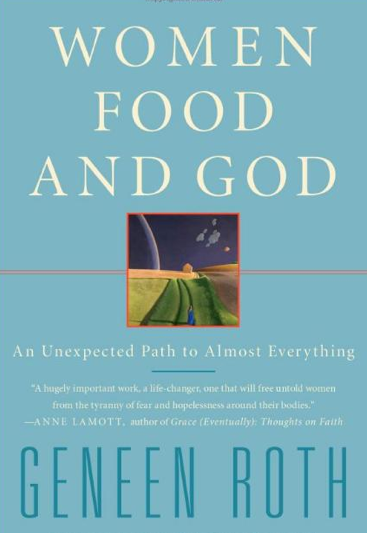 I read a book a few years ago called Women Food and God. Author Geneen Roth provides seven rules for healthy eating habits. One of those rules is to eat without distractions. Distractions include radio, television, newspapers, books, intense or anxiety-producing conversations or music. In other words, don’t multitask while you eat.  Jenelle discusses this as well in her video and it’s wisdom that is hard to follow but really does help you to eat in a much healthier way.

I’ve always said that one of the reasons I loved being a teacher was because I learned so much from my students. Now I realize I’m still learning from them even when I am no longer their teacher. Thanks, Jenelle! 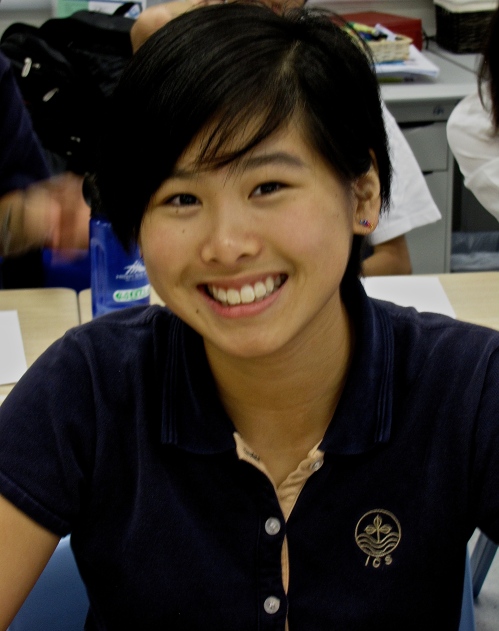 Other posts about my former students……

So Proud of Them- Visiting my Students in New York

Tagged as learning from your students, multitasking, women food and god 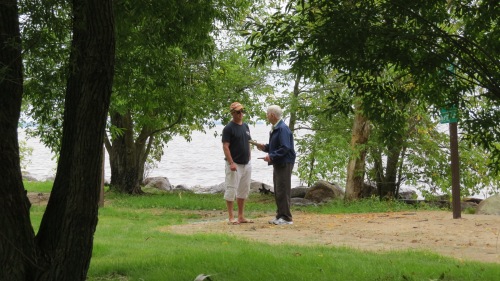 Many campgrounds in Manitoba have been impacted by flooding this year.  I saw evidence of that first hand last weekend when we drove out to Birch Point.  It is only a few miles from our family cottage at Moose Lake. A trip out to Birch Point to walk along the shore and collect driftwood is often a part of the vacation ritual. There was no shore to walk along this year. 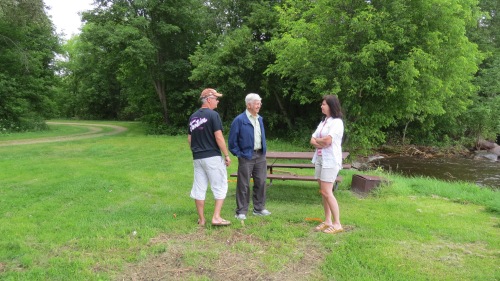 I went to Birch Point with my Dad, my brother Mark and my sister-in-law Kathy.

My nephew who has a summer job with the conservation authority in the area says that at times this summer the water from the lake has washed right up over this road.

The campground is closed since many of the campsites are under water.

You can’t use the boat docking area. They haven’t even put in the dock.

Mark and Kathy were able to walk all the way out to that rock in the lake last summer. What a difference!

Mark found one piece of wet driftwood along a shore that is usually littered with thousands of dried pieces of driftwood.

It’s hard to find a place to roost mid-flight when the lake has expanded so much.

Summer is more than half over and there are still some twenty Manitoba campgrounds closed or partially closed due to flooding. Travel Manitoba authorities say if you plan on camping this summer  you’d better check to see if your campsite is open before heading out.

Other posts about being at the lake……

Lord You Have Come To the Lakeshore

My international readers might not know that here in Canada we have our very own Amazing Race television show. It started last year and all the race challenges took place in different parts of our own country. This year the show’s gone beyond Canada’s borders and the first stop was Hong Kong!  I was excited! I lived in Hong Kong for six years and was curious about what places the contestants  would be sent to in this wonderful city I once called home.

The Amazing Race show sites included the Big Buddha, a wet market, the walled city in Kowloon, a restaurant that served snake soup and the walk of fame along the harbor. Those weren’t bad choices but I couldn’t believe the producers hadn’t chosen two spots in Hong Kong that clearly have a strong Canadian connection.

One is the Chi Lin Nunnery. It is the site of sixteen beautiful halls each containing a statue of Buddha. The halls were all built with thousand-year old Canadian cedar and you can smell that wonderful Canadian cedar the moment you step onto the site.  The grounds of the nunnery are stunningly beautiful……

I think the Chi Lin Nunnery would have been a perfect site for one of the challenges of the Canadian Amazing Race.

At the Sai Wan War Cemetery in Hong Kong you will find hundreds of graves belonging to Canadian soldiers who died defending Hong Kong against the Japanese. Many were part of a regiment from my home city of Winnipeg. All the graves of the Canadian soldiers bear the maple leaf imprint. 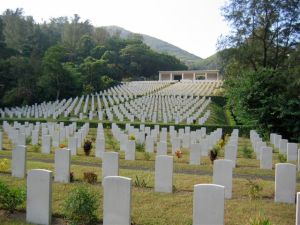 It would have been great to use either the cemetery or the nearby war museum as a site for a race challenge so more Canadians could learn about the involvement of Canada in defending Hong Kong.

This week the Amazing Race contestants are off to Macau. It is also a place I have visited many times. I’m curious to see what sites will have  been chosen there for filming.

Other posts about Hong Kong…..

Davey At the Bat

We spent this past weekend in Bemidji, Minnesota where Dave was playing in a slow pitch ball tournament. I was experimenting with the sports action setting on my camera and took this series of photos of Dave up to bat. He hit a triple! 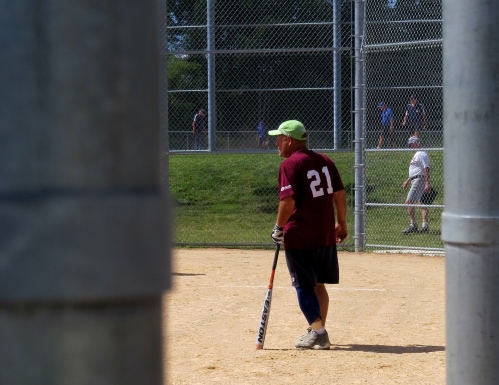 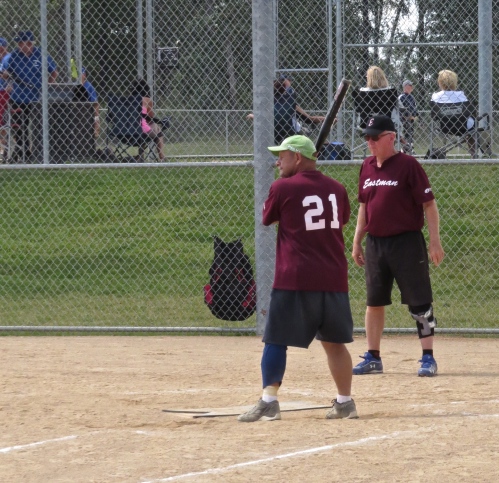 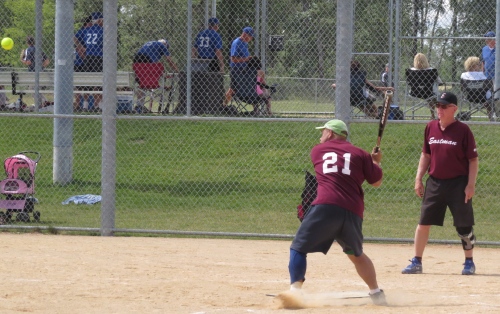 Other posts about  baseball…..

Take Me Out to the Ball Game- Osaka Style

I just spent a couple days at my brother and sister-in-law’s cottage at Moose Lake, a cottage which has been in our family for three generations. Taking the boat to the north end of the lake to search for the bald eagles that nest there, has been a ritual during cottage visits since my childhood.   I took these photos on Friday.

The Eagle   by Alfred Lord Tennyson

He clasps the crag with crooked hands;
Close to the sun in lonely lands,
Ring’d with the azure world, he stands.

The wrinkled sea beneath him crawls;
He watches from his mountain walls,
And like a thunderbolt he falls.

Who satisfies your years with good things so that your youth is renewed like the eagles. – Psalm 103:5

Other posts about nature….

A Christmas Day in Hell

Why Did The Creator Make Mosquitoes?

I’ve struggled with maintaining a healthy weight since I was a teenager, so I’ve been an avid reader of all kinds of material related to diet and exercise and weight loss.  Research is constantly unearthing new things about how our genes, activity, environment and food consumption impact our weight.  How to keep up with it all?  I’ve found a blog that offers a short, daily post with good, thought-provoking information about diet and nutrition. It’s called Weighty Matters and is authored by Dr. Yoni Freedhoff.

I’ve been reading Dr. Freedhoff’s blog ever since and here are just five of the many interesting things I’ve learned in recent weeks.

1) While exercise can make you a whole lot healthier physically, emotionally and mentally it doesn’t really help you lose weight.

2) Fruits and vegetables aren’t equals. Fruits have way more calories, but are still a far better food choice than many other things.

3) Low calorie sweeteners have gotten a bad rap but in the end they are probably healthier for you than always eating the real thing. 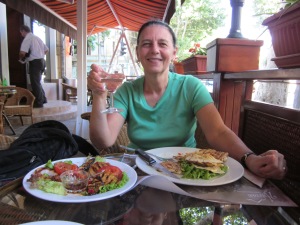 4) There are many different ways to lose weight and what works for one person doesn’t work for another. BUT the only way to be truly successful  and maintain your weight loss is if you LIKE AND ENJOY the lifestyle and diet you use to lose weight ENOUGH so that you can keep on living that way forever.

Other posts about diet and exercise……

The  St. Boniface Basilica was a brilliant choice as a setting for the musical Quo Vadis. I attended the performance on the night of  July 22 which just happened to be the forty-six year anniversary of the tragic fire that nearly completely destroyed the huge Winnipeg cathedral in 1968. 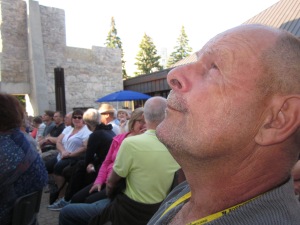 All that remained of the old church after the fire was the majestic front piece. That stone facade which is now more than a century old, provided the backdrop for the Fringe Festival production of Quo Vadis.

This was not your regular fringe play. It had a huge cast with many trained and talented musicians among them. The story is taken from a Polish novel by Nobel Prize winner Henryk Sienkiewicz. It is set in 64 AD during the reign of the Roman Emperor Nero. It recounts the love story of a military man and a young Christian woman, who along with others of her faith, is slated for death because of her beliefs. 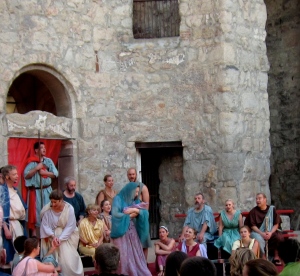 The musical was written by Olaf Pyttlik. Olaf and his wife lived in my condo building this last year while their home in Wolseley was being completely gutted and renovated.

Not only did Olaf have that project on the go, but in May he opened a new restaurant in the Exchange District called Across the Board. Pyttlik also owns and operates a  successful audio production company called daCapo.  And somewhere in between remodeling a house, opening a restaurant and running a business, he found time to write a musical and stage it at the Fringe Festival. Does this man ever sleep?

The performers in the Quo Vadis production obviously loved what they were doing. The music was beautiful and inspiring.  The storyline was easy to follow. It was a great evening of entertainment made all the more special because the music we were hearing was brand new and was having its debut at the Fringe Festival. An added bonus was that we were outside on a lovely Manitoba evening. The breeze was dancing in the actors hair and birds were calling and winging overhead.

If you haven’t already seen Quo Vadis- go! If it’s sold out, you can just sit down on the Basilica grounds and listen to the wonderful music.

Note: The musical mentioned Christians being devoured by wild animals in the Colosseum.

When I toured the Colosseum in Rome our guide told us that never happened.  Quo Vadis also made reference to Christians hiding out in the catacombs. 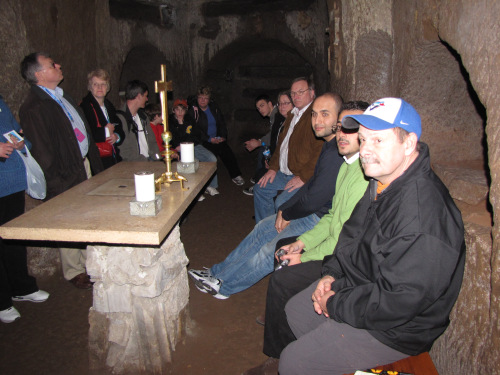 Our tour group in the catacombs

When we visited the catacombs in Rome our guide told us that’s just a myth too.

Other posts about the Fringe Festival……