What’s Wrong With These Cupcakes?

I have brought these cupcakes to two different Christmas social events and no one has eaten them. Why? They are moist with a spicy pumpkin flavour and full of chocolate chips. They are not too big, just bite-sized and have real cream cheese icing. I brought them to a Christmas party last Saturday and only one cupcake was eaten, by a woman who I think felt sorry for me because no one had touched my contribution to the dessert table.

Then this past Friday I brought them to another Christmas event with some 70 or so people in attendance, but only two of my cupcakes were eaten. My husband claims the problem is they look a bit too much like a certain part of the human anatomy. He suggests removing the chocolate chip adorning each one.

The next Christmas party we will attend is this coming Friday. I think even if I freeze them the cupcakes may be tasting a little old by then. So I am going to have to try something else. Now, what would be more popular? Any suggestions?

Visiting My Students in New York

Tagged as cupcakes no one is eating

You are probably familiar with this famous painting by Jean-Francois Millet called The Gleaners.  Gleaning is the act of collecting leftover crops from farmers’ fields after they have been harvested.  In the Bible, it is recommended as a way to help the poor.

This past week we saw the modern version of gleaning in Leamington Ontario.  Both my brother-in-law Paul and my sister-in-law Shirley volunteer their time at the Southwestern Ontario Gleaners.

Paul and Shirley took us to see what they do as volunteers.  We arrived just at coffee break time so the work crew wasn’t on the floor when we there but it was still interesting to check out the operation.

Dave and his brother Paul with some of the donated produce

Local fruit and vegetable growers donate unmarketable produce to The Gleaners and then a crew of volunteers turns it into nutritious packaged food mixes that are distributed to needy people locally, nationally and internationally.

Behind Dave and Paul is one of the big dehydration machines

Shirley explains how the assembly line works for packaging products.

The Gleaners make a number of different products

The mixes are measured, labeled and packaged.  The volunteers can package 36,000 servings of soup in just one hour. Last year they diverted more than a million pounds of produce from landfills.

Everything is put into boxes 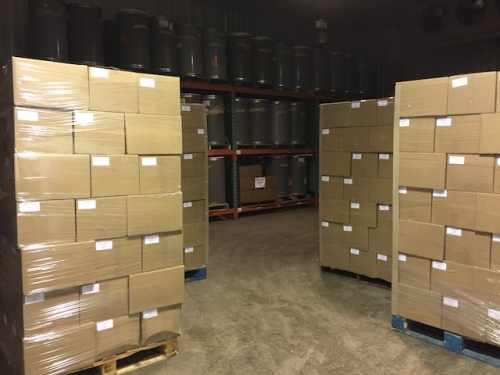 These boxes are ready to leave the building to go worldwide including northern remote parts of Canada. Each year the Gleaners area of influence gets bigger as they send more products to more destinations.

Instead of food being thrown away it is gleaned and repurposed and helps people who need it most.

This sign I saw on the chalkboard at the Southwestern Ontario Gleaners explains their philosophy. The day we visited there must have been nearly thirty people lending a hand to the important mission of The Gleaners. Thanks, Paul and Shirley for showing us around.  The work you are doing is important and inspirational.

Mending What We Can

We were driving to the Toronto airport from Leamington Ontario on Wednesday when we got a text from our friends Ed and Millie. Did we want to do a Burger Week evening with them?  Our plane was landing in Winnipeg a little after four so we thought a six-thirty get together would work out just fine. We suggested they come to our place for a drink on our rooftop and then we’d head out on the streets around our house. One hundred and twenty -four restaurants are part of Burger Week and at least twenty or more are within easy walking distance of our condo. 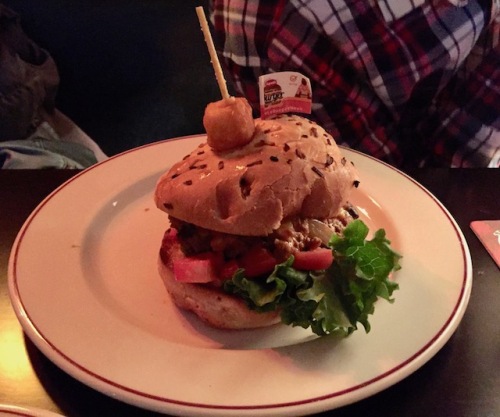 First, we went to Old Bailey’s because their burger sounded interesting and neither couple had been to the place in ages. What an inspired choice! Their feature burger The Aztec Mexican Chili Burger was great. It consisted of a ground beef patty, jalapeno jack cheese, guacamole, pico de gallo, green leaf lettuce, chipotle mayo, all smothered with Mexican chili between an onion bun topped with Cheddar cheese bites. We shared two burgers. The service was friendly, the atmosphere cozy and we had a great time. 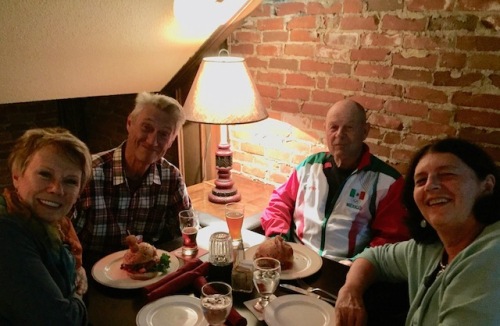 Next, we wanted to try out the Krabby Patty Burger at Chosabi’s. Sadly the restaurant was closed. Dave had heard a great review of the Amsterdam Tea Rooms’ Royale with Cheeseburger. Unfortunately, they were all sold out of the two hundred burgers they’d had on hand for the night. What about The King Mac at the King and Bannatyne establishment?  Two fellows on the patio told us the burger was fantastic but the line up was very long and we were hungry.

So we headed over to the Kings Head Pub for their Ragin Cajun Burger. It consisted of a beef patty broiled in spicy cajun sauce with cajun mayo, lettuce, tomato, and onions on a glazed bun sprinkled with Parmesan cheese. It was fine but came in a pale second to the burger at Old Bailey’s.

We had thought of hitting three establishments but by now we were stuffed and it was after 10 o’clock. Time for everyone to head home. We hadn’t seen the Hildebrands for a while so it was great to catch up. We will have to do Burger Week again next year.

The Tale of the Traveling Pineapple Crisp

My husband is easily lured into spontaneous purchases especially when things are ‘on sale’. He had come home from a shopping trip to Costco earlier in the week with more pineapple than the two of us could ever eat. I decided I’d use some of it for a pineapple crisp.

Our friends Darrel and Lucille live about thirteen kilometers away so Dave suggested we should cycle there in order to get in a little training run for our upcoming bike trip in Croatia. I thought that was a great idea. But how would we transport the pineapple crisp I had already made?

It didn’t fit in our saddlebags or my bike’s wicker basket. Dave came up with an ingenious solution. We put the crisp into a plastic bag and he tied it to the back of his bike, securing it tightly in place with some duct tape. I’ll admit I was skeptical. I expected that crisp to go flying off the bike at any moment.  But there it sat as we bounced over railroad tracks, hit potholes in the pavement, made abrupt turns to avoid red lights, and were buffeted by gusts created by huge passing trucks. 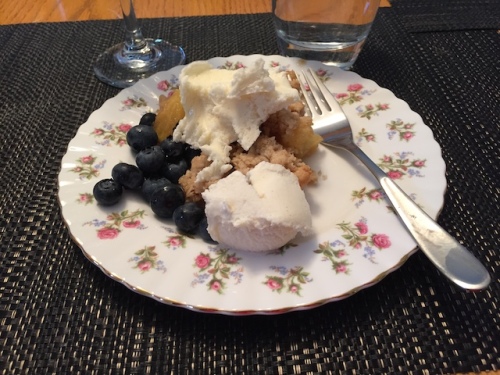 The crisp arrived at Darrell and Lucille’s in perfect condition and served as a nice finale to the delicious meal our hosts had prepared for us and another couple.

The bike ride home with a now-empty pineapple crisp dish was a little less nerve-wracking and provided a good way to work off any damage done to our waistline by eating the crisp.

You may remember that last year my husband Dave in an attempt to relive his childhood on a tomato farm in Leamington Ontario planted tomatoes in an outdoor garden box near our home. His plants were lush and fruitful but he didn’t get to eat any of its products because our neighbors, workers in nearby offices, and Exchange District visitors kept picking them before he could. This year he came up with a new idea. 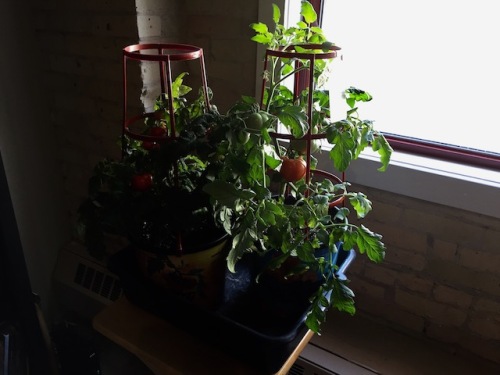 He would plant two plants outside and have two plants in pots in our condo just in front of our sunny livingroom window. Both his outside and inside plants are loaded with lovely tomatoes and we have been eating the ones on the indoor plants. Dave has already spotted a few of the tomatoes from his outdoor plants ripening on the window ledges in offices nearby.  It seems Dave’s new plan is a winner! We get tomatoes and so do other tomato lovers in our neighborhood.

Checking Up on the  Guerilla Gardener

I’m Married to a Guerilla

My Friend Is A Food Artist

We had dinner at our friends’ home on Saturday night. While Terry served as the barbeque chef, Audrey prepared our meal for the grill and she was the artist who skillfully arranged the beautiful platters of food we ate.

I was telling Audrey about the Netflix series Chef’s Table. The artfully presented dishes of the award-winning chefs profiled make for stunning cinematography. The time Audrey spent creating the artistic platters and lovely dessert plates for our meal reminded me of that.

Austrian born chef Wolfgang Puck said “preparing a meal is like creating a painting.”  If that’s true our meal on Saturday night was a masterpiece.

This week I did something I’ve never done before.  I bought my groceries online and had them delivered to my door.  We are a one car family and because of the fact my husband’s part-time work, many athletic endeavors, and hobbies require him to have a vehicle, I rarely have access to ours.

This week Dave’s busy schedule left absolutely no time for me to go to the grocery store.  Since the nearest one is several kilometers away I was going to bike there and fill up my saddle bags with groceries.  But some unseasonably cold weather deterred me. I had often seen the Save On Foods van outside the door of my building so I figured some of my fellow condo dwellers were having groceries delivered, and thought maybe I should give it a try too. 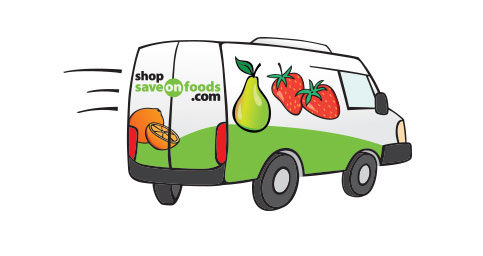 It couldn’t have been easier. I registered online, found the things I needed and put them in my ‘shopping cart.’  Then I picked a delivery time.  I noted that if you chose less popular delivery times the cost of delivery was as low as $4.95.  What a bargain! Someone would pick out my groceries for me in the store, bag them and deliver them right to my door for $4.95?  If I figured out my time shopping, gas for the car and monetized the effort spent hauling the groceries from my parking garage up to my condo I was even going to be ahead financially.  I also found I stuck to my list better shopping online and wasn’t enticed by other ‘deals’ I might have succumbed to shopping in the actual store so my weekly total was quite a bit lower than usual.

Then I had the loveliest chat with the young man who delivered my groceries and realized I was helping to provide a much-needed job for him.  What a win/win situation.

I’ve already started my grocery list for next week. I may never go to a grocery store again!

To Market, To Market

Tagged as shopping for groceries online