The Spirit of Ukraine

We did a 26 kilometer round trip on our bicycles on Monday to visit the Ukraine Pavilion at Folklorama. Our friends Brian and Merle had invited us to join them to watch their grandson perform. He is part of the Zoloto Ukrainian Dance Ensemble.

We started our visit to the pavilion by sharing a typical Ukrainian dinner, holopchi, perogies, sausage, pickles, coleslaw, and bread. And then the show began. It featured traditional dances associated with harvest time.

The dancers were absolutely amazing. They performed so enthusiastically. I loved their bright colorful costumes. They were incredibly flexible and did all kinds of gymnastic moves. I figured they must be in terrific shape to dance for so long and so energetically. 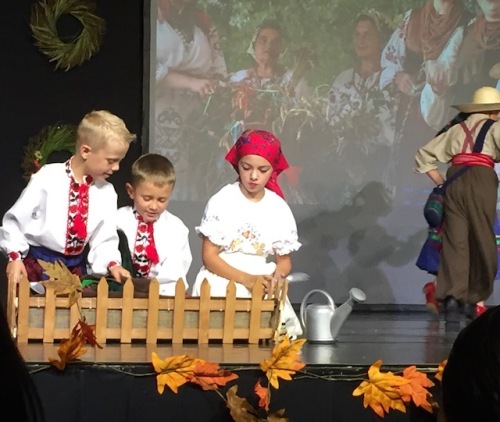 Our friend’s grandson is furthest to the left

Our friend’s grandson is only six years old but he took a central role in the performance by the youngest members of the Zoloto Dancing Ensemble.  The kids were charming and were certainly very talented dancers!

A woman sitting across from us said the Spirit of Ukraine Folklorama Pavilion features the culture of the area of Ukraine around the city of Lviv in the more western part of the country. Her family is from the Kyiv area of Ukraine and they will have their own pavilion at a different location in the city during the second week of Folklorama.  She told us the two groups from Ukraine have major differences so it wouldn’t really work to run a pavilion together.  I guess even at Folklorama there are politics involved.  Since Dave and I have visited both Lviv and Kyiv the woman’s comments had me thinking about differences we may have detected in our visits to the two cities.

The Spirit of Ukraine Pavilion was great and if you get a chance to go and see the show you will definitely be entertained.

Why Do We Have To Blame Someone?

This is my Carillon column this week.

Who is to blame?  Last week the headlines of provincial news media featured a story about a car accident that occurred during a funeral procession. Thomas Novak a pastoral worker for the Catholic Church was in a procession to a cemetery, when his car was hit on the passenger side at a busy Winnipeg intersection. Novak was shaken up but not injured. 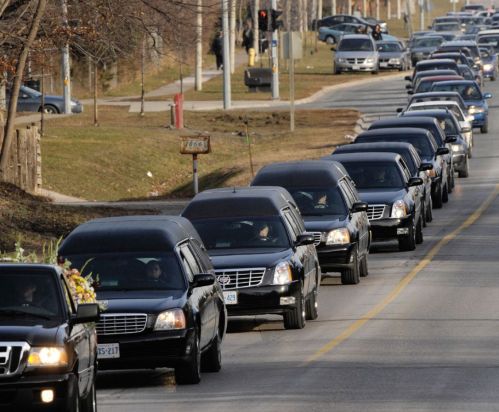 However as a result of the accident he is calling for an end to funeral processions.  He thinks they are just too dangerous.  Funeral processions are a tradition still practiced in some rural Manitoba areas, but infrequently in Winnipeg, and consequently many drivers simply don’t know the protocol surrounding them. That invites accidents. I tend to agree with Novak.  If funeral processions are a hazard why have them, particularly at high traffic times of the day? Most families now lay their loved ones to rest in private services before or after the actual funeral. Often cremation has taken place and ashes will be scattered later so no trip to the cemetery is required.

One argument made for continuing funeral processions is that people might have a hard time finding their way to cemeteries without them.  GPS technology and Google Maps make that argument a moot one.

This plaque near the Provencher Bridge in Winnipeg pays tribute to Lyle Thomas a worker who died while it was being built.

Another reason given for funeral processions is that they are a way to show respect for the person who has died. But there are many other opportunities for doing that, including publishing obituaries, making a charitable donation in the person’s name, planting a tree in their memory, erecting a plaque or carrying on traditions they started.

What really surprised me about this news story was how it became such a big issue and how commenters on media sites immediately looked for someone to blame after reading articles about the issue.

The first targeted group was young people, who according to many commenters don’t have proper respect for traditions like funeral processions. Young people cause accidents because they are so busy texting they don’t pay attention.  Parents were also targeted for failing to teach their children proper respect for the law and for letting their kids spend too much time on their devices, so they become socially isolated and don’t understand social norms.

Another targeted group was elderly people who according to some commenters don’t quit driving when their health no longer allows them to drive safely, and are generally a hazard.  Manitoba Public Insurance was also targeted for not having stringent enough protocols for awarding licences and not making people retake their driving tests more frequently.  The RCMP was blamed for not enforcing laws more strictly to get bad drivers off the road and for not providing police escorts for funeral processions.

Another targeted group was newcomers to Canada who according to some commenters don’t know the traditions and cultural habits of their adopted country and haven’t become accustomed enough to driving here. The federal government was also targeted for letting too many immigrants into Canada.

Organized religion was also a target of blame. Some commenters said without the religious traditions and trappings surrounding funerals these accidents wouldn’t happen. 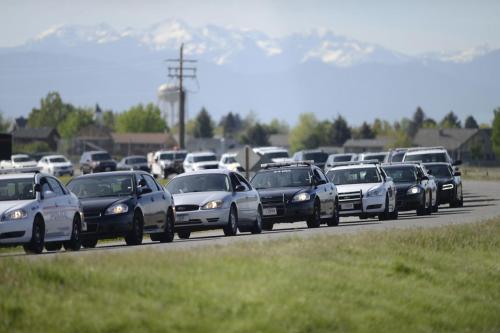 Apartments for the Dead

Robert Indiana died on May 19th.  He’s the artist who created this iconic design of the word LOVE.  You’ve probably seen it somewhere in some form.  It was orignally made for a Christmas card for the Museum of Modern Art in New York and has been featured on postage stamps as well as in sculpture form in many cities, including New York and Philadelphia.

The news of Robert Indiana’s death had me searching through the media library on this blog for images described with the word love. 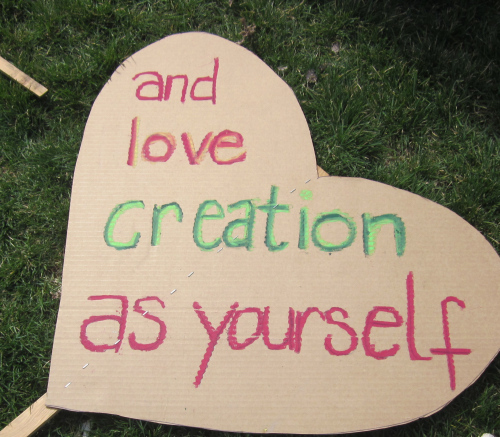 Photographed at an April 2012 Earth Day celebration in Winnipeg this placard exhorts people to LOVE creation. 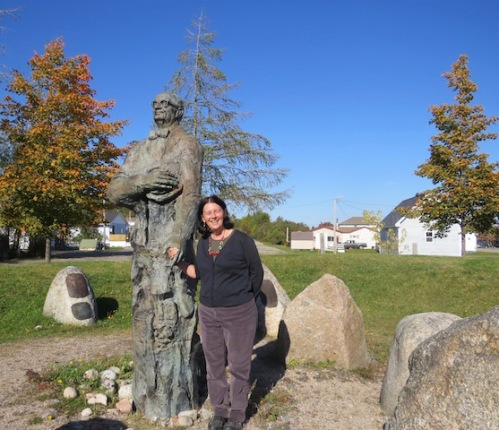 This statue of Joey Smallwood the first premier of Newfoundland depicts him with his hand over his heart to show his LOVE for his province. Photo taken in Gambo Newfoundland in October 2016. 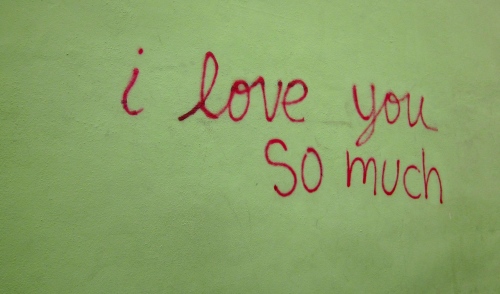 This declaration of  LOVE was photographed on the side of a building when I was in Austin Texas in March of 2014 watching our son perform at the South by Southwest Music Festival.

Bob Marley had a song called One LOVE. I photographed this image on his former home in Jamaica when I visited it in February of 2014

Thomas Edison was good friends with Helen Keller who autographed this photo for him with the words…..
Not loudness but LOVE sounds in your ear my friend. Helen Keller. I photographed it at the Thomas Edison Museum in Florida in February of 2014

I photographed Wayan in Ubud, Bali in March of 2008. Wayan is one of the main characters in Elizabeth Gilbert’s book Eat, Pray, LOVE.

This sculpture called LOVE of Learning by J.D. Lees is outside the site of one of the city of Steinbach’s first schools. I photographed it in October of 2013.

My husband made me give the sculpture The Bean in Chicago a kiss of LOVE in December of 2011.

A Lovely Day in Steinbach

Is Binge- Watch A Word?

Last night I binged-watched a series on Netflix called Atypical. It was about a family whose eighteen year old autistic son has decided its time for him to start dating.  The series shows how having an autistic child impacts every member of the family in both positive and challenging ways.  There is lots of love and antagonism, responsibility and irresponsibility, independence seeking and bonding as the family tries to get things right.

Atypical is the third Netflix series I’ve binge-watched.  The other two are Offspring and Outlander.  Offspring had six seasons with around a dozen episodes each and Outlander two seasons each with sixteen hour-long episodes.  After both those instances of binge-watching  I vowed not to binge-watch again because when I do I neglect many other important things in my life.

However last night when my husband abandoned our planned bike ride to watch the Blue Jays game I decided to binge-watch Atypical, a series that had been recommended to me. I wasn’t sorry.  It was an engaging and interesting show and with only eight episodes each  thirty to forty minute long I finished the series in one evening.

As I started to write this post I was wondering if I should hyphenate binge-watched or if it was even a word.  So I looked it up and yes indeed it is a word.  In fact the Collins English Dictionary chose ‘binge-watch’ as its word of the year in 2015. I also discovered that about 64% of North Americans binge-watch a television series at least once a year.  So in that way I’m not atypical but very typical indeed.

Warms Your Heart and Makes You Laugh Out Loud

What in the World is That? 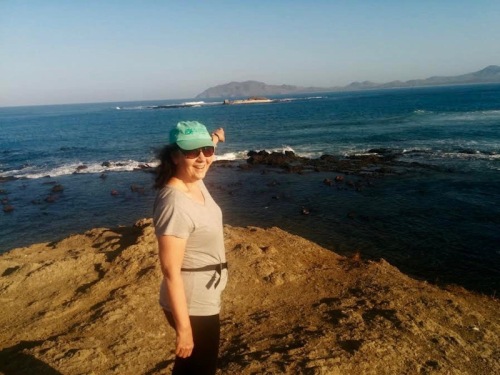 On one of our morning walks here in Costa Rica my brother and I spotted a little island at the North Point of Tamarindo Bay. It seemed to grow smaller and larger with the rise and fall of the tide.  I wanted to know more about it.

I found out it is called Isla del Capitan because of a local legend that a shipwrecked captain swam to the island from his sinking ship and died there. They say the Captain’s ghost stalks the island, so no one dares to spend the night there. 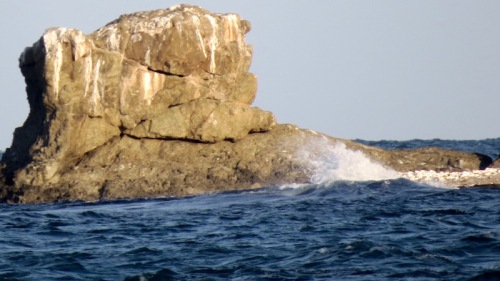 I thought this outcropping near the tip of the island might be the remains of building of some sort where the captain had taken refuge. But a close-up shot shows it is only a rock.

Many fisherman moor their boats near the island.

It is a popular nesting and roosting spot for the local pelicans. 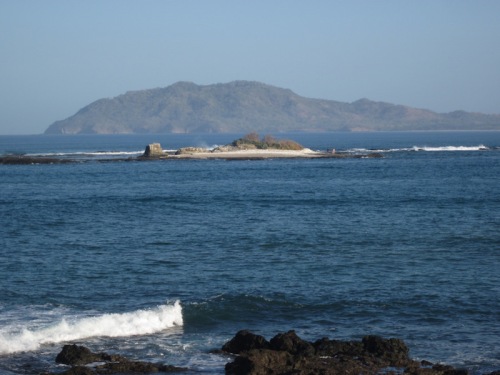 Apparently a destination wedding has been held on the island so you can access it by boat. One morning we did see some people on the island with no boat in sight so they must have swum out to Isla del Capitan. It might be a good thing to try one day when we are looking for an adventure.

A Great House Haunts Me

“Wow!”   “That’s extra crispy!”  I was giving a tour of the Olympus exhibit at the Winnipeg Art Gallery yesterday to a group of 11 to 14 year olds. They were fantastic! They knew so much about ancient Greek mythology and they were so excited about seeing the exhibit.  One boy kept remarking that each new thing I showed them was ‘extra crispy’ so finally I asked him what that meant. He told me it means something is totally awesome and amazing. When I got home I looked it up and sure enough right there in the online urban dictionary it says…….

Something so good, so hot, so amazing, it can only be described in two words; extra crispy.

So if you haven’t seen the Olympus exhibit at the Winnipeg Art Gallery yet, come on down for an extra crispy experience.

The Goddess of Running Shoes and Olympic Medals

Matching- The Winnipeg Art Gallery and the Nelson Atkins Museum

I visited the Neslson Atkins Museum of Art in Kansas City last week.  Guess what I found? 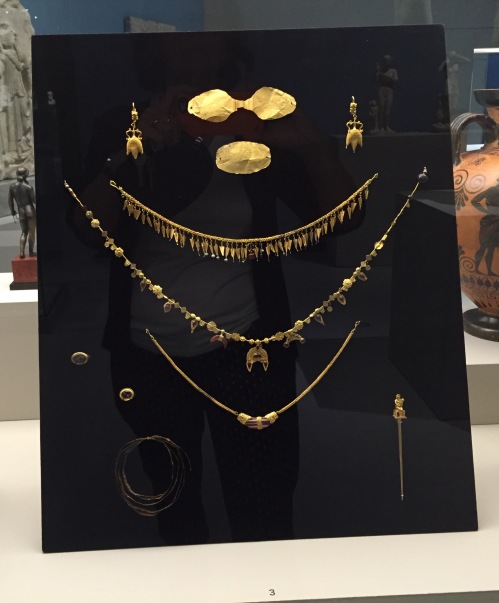 Connections at The John and Mable Ringling Museum of Art