The Taj Mahal At Dawn

I’ve had India on my mind for the last couple days. Perhaps it is because at a party on Friday night someone asked me about my visit there and whether I would recommend it as a travel destination. Or perhaps it is because the primeminister of Canada Stephen Harper is currently visiting India and news about his trip is on Canadian broadcasts. I’ve written about India before on this blog. But here is one journal entry from my visit there I haven’t posted yet.

I   wake up at 5:00 am in Agra, India. I am excited about visiting the Taj Mahal at sunrise.  I try to be quiet so I won’t disturb my husband Dave who is still sleeping. The lighting system in our hotel room, as with almost everything in India, doesn’t really work properly. You can either have every light turned on or none at all. Since I don’t want to wake Dave, I prop the door of our suite open slightly and try to put my clothes on in the dim light it affords all the while praying no one will walk by and see me dressing.

The hotel lobby is empty when I arrive except for a bellboy asleep in his uniform on a thin mattress on the floor. He immediately awakens upon my entry, jumps up, stashes his mattress in a closet and takes his post by the elevator doors. 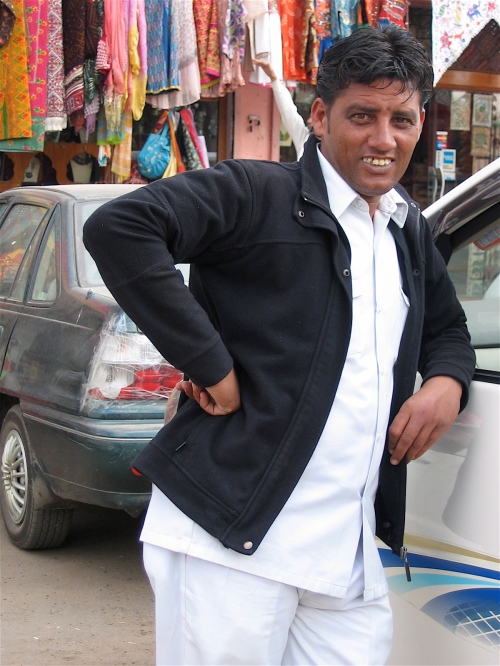 A few minutes later my three traveling companions join me and we go outside where our driver Mr. Singh is waiting for us.  Our whole group visited the Taj Mahal the afternoon before, but the four of us have decided to make a second trip to view the famous wonder of the world at dawn.

Mr. Singh drops us off at the gates of the Taj Mahal compound. No motor vehicles are allowed near the building in an attempt to protect it from pollution. The day before we’d opted for a donkey cart ride up to the site and a camel ride back down. It is too early however for those travel options so we hike up to the Taj Mahal by foot. It is so cold I can see my breath in the freezing air and I’m glad for the warm fleece lined windbreaker I purchased just before leaving for India. Monkeys are chattering, pigeons cooing and high- pitched calls to prayer echo around us from at least three different mosques in the vicinity. The walkway is peaceful compared to the day before when beggar after beggar approached us for money and an endless parade of hawkers tried to sell us Taj Mahal key chains, postcards and souvenir books. The moon is just a thin sickle in the sky and I hear some German tourists behind me whisper, “ Pass auf” to one another as they try to find their way in the dark.

We arrive at the pay booth where an attendant with a gruff voice demands 750 rupees. Three old men are sitting in the booth in khaki pants and fraying suit jackets. They toss my money into a rusty box and one man counts off my change with his dirty, greasy fingers from a thick wad of bills in his hand. Time to go through the body and bag search. No food, cigarettes, ipods or video cameras are allowed near the Taj Mahal. Men and women are in separate lines for the search, since it is thorough enough that it wouldn’t be proper for a man to search a woman. Everyone in our group passes inspection and we’re on our way up to the Taj Mahal 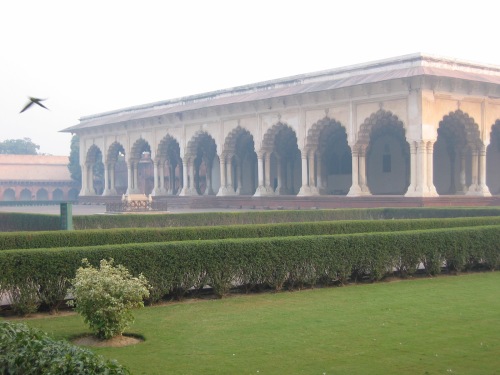 It’s beginning to get light. I hear a noise and look up to see a fruit bat flying overhead, its huge wings flapping in the cold morning air. We’ve arrived at the entry gate and arranged atop it are twenty -two domes, one for each year it took to build the mausoleum. Ahead I can see the Taj Mahal perfectly reflected in the long narrow pool that leads up to it. A tint of rose in the sky casts a pink shadow on the manicured trees and lawn.  A lone hawk is circling the top minaret of the Taj Mahal, stopping for a moment to hover at its pinnacle.

I sit on a cold marble bench just before the steps leading up to the mausoleum to put on the shoe coverings one must wear when entering a holy Muslim site. The other option is socks or bare feet but on this chilly morning I opt for the disposable shoe coverings. I enter the round room where the Shah and his wife lie side by side. Her tomb is smaller and perfectly aligned with the centre of the Taj Mahal. His larger marble coffin is off to the side. The Shah actually began to build a second mausoleum for himself, in contrasting black on the other side of the river from his wife’s burial site. However after his death, his son, leery about the impact of another such expensive project on his empire’s economy decided to save money and bury his father alongside his mother. Someone has already visited this morning and laid garlands of gold and red flowers on the tombs. The room is dark save for the light filtering down from a beautiful wrought iron lamp just above the burial site. 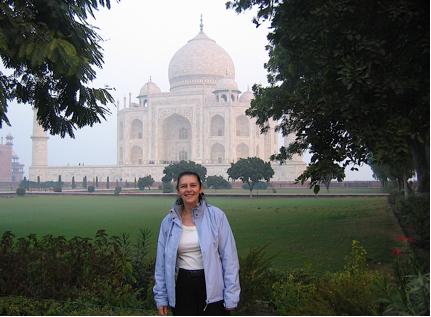 I’ve just finished reading a book about the Shah Jahan, the man who built the Taj Mahal four hundred years. The book told me enough about his personality that as I stand in the beautifully decorated room where he is buried I know he would be pleased that every day so many people from around the world flock to see the building he designed to honor his beloved wife. Some people even get up at 5 o’ clock in the morning to do it!

We Put our Lives in His Hands

The Street Children of Dehli