A Tipped Caboose, A Black Eye and A Wedding

The caboose tipped over!  I was visiting my 94 year old Aunt Viola in Saskatoon on the weekend and she told me a story about a time her family was in an accident on the way to a wedding. 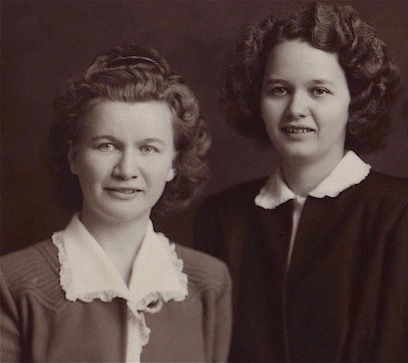 My aunt Viola and my mother Dorothy. Mom is on the right.

My aunt and my mother were asked to sing a duet at the wedding of their hired girl Tina.  Tina was a recent immigrant from the Soviet Union.  My grandparents had a farm in Drake Saskatchewan and my grandfather often offered to go to the train station in nearby Humboldt or Lanigan to pick up new immigrants from Mennonite communities in Russia when they first arrived in Canada. If they didn’t have relatives or friends to stay with he would bring them home till they could find work and a place to live.  This happened with Tina, but she stayed on for quite some time and my grandparents gave her a job helping with the housework and yardwork.  Besides her own four children my grandmother was also caring for her aging mother and blind brother-in-law, so Tina’s help was appreciated.

Eventually Tina met a man whose last name was Buhler and they decided to marry.  My mother and my aunt were both very musical and Tina asked them to sing at her wedding.  My Aunt Vi said this was a little unusual because normally their parents sang duets together while my mother accompained them on the piano, but Tina wanted Viola and my mother Dorothy to sing so they agreed. My grandmother would accompany them on the organ. 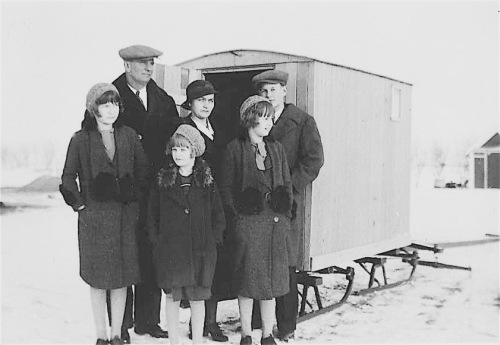 The Schmidt family poses beside their caboose. My Aunt Viola is to the left of her youngest sister Leila and my mother Dorothy is to Leila’s right. Behind them is my Uncle Earl and my grandparents Peter and Annie Schmidt.

The Schmidt family set off for the wedding in their horse drawn caboose, although my aunt said they usually referred to it as ‘the bus.’  The weather had warmed a bit and the roads were slushy and muddy and a real mess so my grandfather decided to go cross country across the land of their neighbor Hugo Bartel because his fields were still quite snow covered.  As they sailed across the field the thin runner of the caboose cut into snowbank and the caboose tilted and then tipped right over.  Everyone was thrown from their seats. No one was hurt too badly but my mother bumped her eye and it quickly became bruised and swollen. 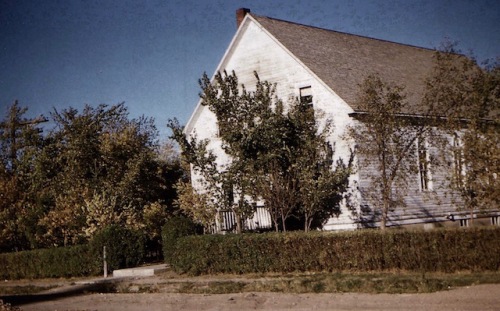 The North Star Mennonite Church where the wedding took place.

The family righted the caboose and continued on to the North Star Church. My mother and my aunt still sang at the wedding, although my mother was sporting a black eye during the performance.  Aunt Vi remembers that Tina had requested the song Keep On the Sunny Side  a popular hymn written by Ada Blenkhorn in 1899 so that’s what they sang.

Later when the family looked back on the accident they remembered it with humour and often laughed about how they tipped over so suddenly and how my mother sang such a positive and upbeat song with a black eye.

A Passport of Her Own

Tagged as drake saskatchewan, family, keep on the sunny side