Why Did You Say That?

At the beginning of each tour we give at the Winnipeg Art Gallery we provide this welcome.

” We acknowledge the Winnipeg Art Gallery in located on Treaty One land, the traditional territory of the Anishinaabe, Cree, Dene, Dakota and Oji-Cree Nations and the homeland of the Métis.”

Treaty One by artist Robert Houle

At the beginning of November I gave a drop- in guided tour to about twenty five gallery visitors and after the tour was over one woman stayed back to ask me a question.  She was from a small rural community some distance from Winnipeg.  “I was just wondering,”  she said, “why you made the statement you did at the beginning of the tour.”

I said that kind of acknowledgement was now common place at many Winnipeg venues.  I told her I’d heard similar statements before concerts at the Centennial Concert Hall, at Winnipeg Jets games at the MTS Centre, at plays at the Royal Manitoba Theatre Centre, before morning announcements at public schools I visit and that in my church such an acknowledgment was either announced or printed in our church bulletin each week. She seemed surprised to hear this.

I told the woman indigenous people had lived on the land where the art gallery stands for thousands of years, long before settlers from other parts of the world came to Canada.  I explained the importance of respecting that and recognizing that although treaties regarding land use were negotiated with indigenous groups their understanding and the settlers’ understanding of those treaties was very different. I said acknowledging the original inhabitants of the land was a way to work towards a more respectful relationship with indigenous Canadians and to actively pursue a path of reconciliation. 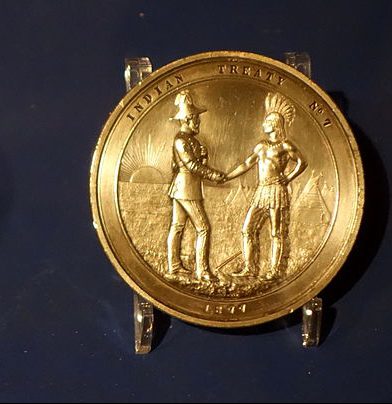 Treaty medal on display at the Glenbow Museum

The woman thanked me for my explanation.  She said she had learned something new.  I had too because I’d really had to think about how I could best answer her question.  And maybe that’s exactly why we acknowledge our presence on Treaty One land before every tour at the Winnipeg Art Gallery………… because it makes us all take a moment and think about something really important.

Gone But Not Forgotten