Music From Young Men to Lift Your Heart

Last weekend I was privileged to hear a program of  music at the First Presbyterian Church here in Winnipeg that featured four outstanding boys’ choirs.

The first was Ecole Sisler Boys Choir conducted by Carolyn Boyes. I was moved by their beautiful rendition of He Ain’t Heavy He’s My Brother made popular in the 1970s by The Hollies and Neal Diamond. The lyrics apply to each one of us no matter what stage we are at on our life’s journey.

It’s a long, long road
From which there is no return
While we’re on the way there
Why not share? 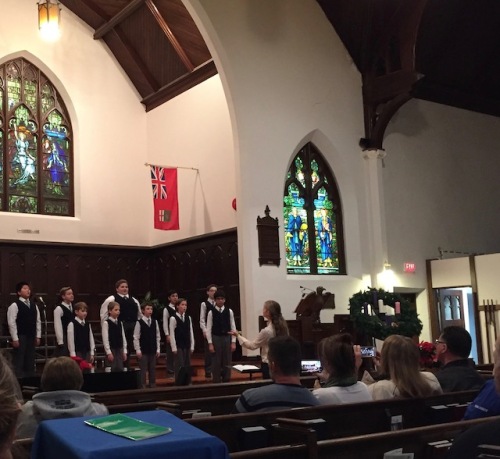 The second male music group was the Pembina Trails Boys Choir conducted by my talented daughter-in-law Alisa Wiebe.  What a full rich sound those ten little fellows made! One of their selections was called Walking in the Air.  It was a piece of music from the film version of Raymond Briggs’  classic children’s book The Snowman. The beautiful sound of the choir had me closing my eyes and  floating in the moonlight sky with the flying snowman and his young friend as they surveyed the ground below.

Next up was the Kelvin Boys Choir conducted by Kimberly Brown. Their outstanding selection had to be the piece by Randall Thompson which set to music the words of Robert Frost’s poem Stopping By Woods On A Snowy Evening. It is a poem I memorized as a child and have introduced to nearly every class of students I have taught from nursery school to grade twelve.  As the choir sang I imagined the mural a group of my grade two students once created to illustrate the poem.

The final group to sing was The Winnipeg Boys Choir conducted by Spencer Duncanson. One of their numbers was Ubi Caritas, a piece that is special to me because our church in Hong Kong always ended our Sunday gatherings with it.  The Winnipeg Boys Choir sang a version by Ola Gjeilo in Latin. The phrase that repeats itself over and over is Ubi caritas et amour, Deus ibi est.Where love and charity are, God is there.

Those words speak to the true message of the season. God is present wherever and whenever people act in a kind and helpful way. It doesn’t matter if we are Buddhists or Hindus or Muslims or Christians. Whenever we care for others God is present and real.  Regardless of our cultural background or racial identity we invoke God’s presence whenever we open our hearts to those in need.  Regardless of our sexual orientation or gender we are the embodiment of God’s spirit when we touch the lives of others in a positive way. Regardless of our social or economic class when we share our resources with others, God’s love as it is illustrated in the story of the baby born two thousand years ago becomes a reality in 2018.

Near the end of November I wrote about how a choir of young women had inspired me.  Last weekend it was choirs of young men who did.  The message of their music has infused a real sense of hope and joy into the holiday.
Other posts………
A Christmas Carol Saved Our Lives
Christmas Carol Inspiration
Dave’s Orchestral Debut