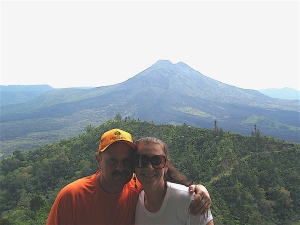 Our recent biking adventure in Toronto brought to mind other memorable biking trips in recent years. One was in Bali. It was probably the easiest bike journey we’ve done because it was almost all down hill. Our trip began at the top of Mount Batur, a volcanic peak.

Here’s Dave with Kathy Glenn a friend who went on the tour with us.

We started out with a breakfast of banana fritters and coffee so thick it was like syrup before setting out on a four-hour bike trek through the villages of Bali.

It was a gorgeous day and we got a great view of the Bali countryside from our bikes. 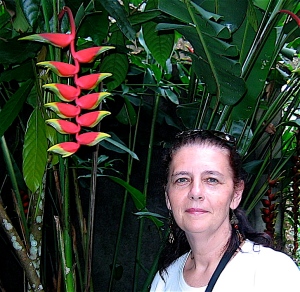 We saw lots of beautiful flowers along the way. 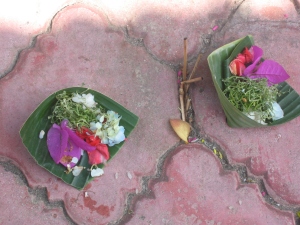 Women in Bali use the flowers to fill offering baskets they weave to place outside their homes and businesses as a kind of prayer each morning.

We stopped to visit a school and learned a little bit more about how the school system works in Bali. 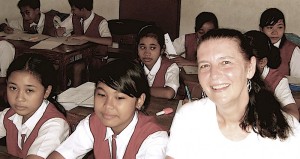 Here I am with a group of grade six girls.  The school had no books, no lights, no air conditioning, forty children to a class and teachers who are paid a minimum government worker’s salary.

Most children only complete elementary school because the government supplies the uniform and books and the parents don’t have to pay anything at all. Anything past sixth grade is at the parents’ expense.

These elementary students said good-bye to us as we left. 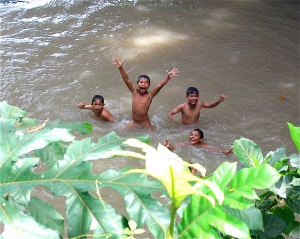 These boys obviously weren’t in school, but were sure having a good time. Some parents keep their kids home from school because the commute is too far or because they want them to work in the rice fields with them.

We saw farmers planting their crops 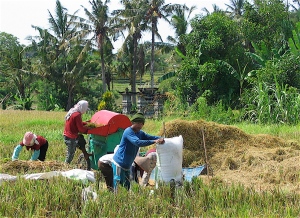 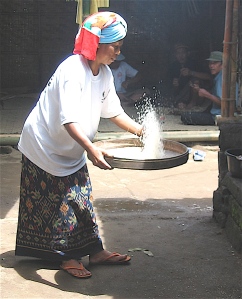 And winnowing their rice for eating.

We visited a cocoa plantation and tried some of the thick rich chocolate.

We passed many family compounds. Most have highly decorative entry ways.

The compounds all had one and often more altars in it for making offerings and petitioning the gods. Unlike the rest of Indonesia which is basically Muslim, Bali is Hindu, but they have their own kind of Hinduism, mixed with animism.

These men were decorating the gate of their family compound for a wedding. They invited us to come in and watch the family preparing for the upcoming festivities.The bride was hiding in the kitchen and only poked her head around the corner.  She looked about eight months pregnant. Our guide said men in Bali like to know a woman is fertile before they marry her so women are often pregnant on their wedding day.

Biking was a great way to see the sights of Bali.

After the bike trip we recuperated with massages at a spa. The owner took a photo of the three of us.

Other posts about bikes………