Tag Archives: To Kill a Mockingbird

“That didn’t really happen did it Mom?” I heard a young woman ask as she and her mother exited the Grant Park movie theatre after seeing the film The Help. There was a note of incredulity in the girl’s voice that I found reassuring. As I listened in inadvertently on their conversation, it was clear the daughter found it almost impossible to believe people could be as racist as some of the characters in the film were,  or that someone would be discriminated against just because they were black. I was glad a young person found such a situation hard to believe. It means society has come a long way since the 1960s.

Our family went to see the movie The Help this week. The three women were all in tears and although the men claimed they were ‘crying inside’ they didn’t seem as visibly moved by the film. 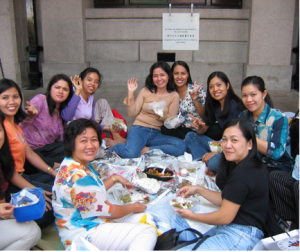 The movie was moving for me because of my personal connections to the story.   The film makes it clear that  upper  middle class children growing up in the American South in the 1950’s and 1960’s were basically raised by their black maids.   I have just returned to Winnipeg after living in Hong Kong for six years and the very same thing has been happening there for several decades. Basically all the upper middle class children in Hong Kong are being raised by their family’s Filipino maids—referred to by everyone as ‘helpers.’ I wrote about that situation in The Winnipeg Free Press in an article headlined Filipina Helpers Know Meaning of Faith.   The maids in Hong Kong are often treated just as unfairly as those in the film The Help.

The movie also reminded me of the novel To Kill A Mockingbird which I taught to my tenth grade students at an international school in Hong Kong last year. Calpurnia, the black housekeeper in the Harper Lee classic, is raising white children Scout and Jem just the way the women in the film The Help are raising their employers’ children.  Skeeter Phelan, who champions the maids’ cause in the film is hardly Atticus Finch, but she does take a position very different than that of her friends and family and despite the risk and danger involved, continues to pursue her groundbreaking journalistic story,  just as Atticus persists in his defence of Tom Robinson. In the film The Help ironically the very women who behave in such a discriminatory way to their black maids hold a fund raiser for needy black children in Africa. It reminded me of the scene in To Kill A Mockingbird when Aunt Alexandra’s missionary circle come to tea to have a meeting to discuss raising funds for the Mrunas tribe in Africa. Ironically at that same tea party they gossip and complain about their black servants.

Recently I re-read the novel Gone With the Wind . Like the young woman I overheard chatting with her mother as she left the theatre after watching The Help,  the stereotypical portrayal of black people in the novel disturbed me in a way it hadn’t back in the 1960s when I read the book for the first time. That’s a good thing.

I recommend you go and see the movie The Help, but read the book first. The novel was discussed by my Hong Kong book club when it first came out, and I was glad I had read the book before seeing the movie. I’d love to hear comments about your own personal connections with either the book or the movie.

Tagged as Gone with the Wind, Grant Park Theatre, The Help, To Kill a Mockingbird