Tag Archives: the eye of government 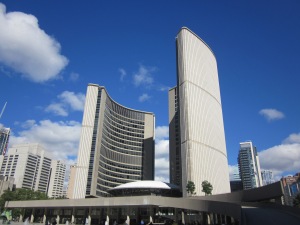 “The Eye of Government” is the nickname given to the current city hall in Toronto, Ontario.  It was built by a Finnish architect named Viljo Revell who sadly died just a few months before completing the project.

Revell said he wanted the structure to look like an eye with the round center building the pupil in the middle and the two side buildings the upper and lower lid.

As we stood looking at City Hall in Nathan Phillips Square on a recent visit to Toronto I thought about how ‘the eye of government’ could be both a positive and a negative concept. It is the role of government to ‘watch’ over its citizens and protect them. But if a government becomes over zealous about keeping too close ‘an eye’ on its people it can infringe on their privacy.

It is also interesting to note that the windows on the two towers all look inward and the different government departments can look into each others’ windows. It is important that various branches of government monitor one another to prevent corruption and foster cooperation. Something negative about the lack of windows that look out however, is that government can become too interested in self-preservation and too preoccupied with itself and not look outward at the people and communities it has a mandate to serve.

The architecture and nickname of Toronto’s uniquely designed City Hall raise some important questions about the purpose of government.

Other posts about Toronto’s City Hall………