I’m calling this the Chicago/Hong Kong Holiday because although we are in Chicago and want to see as much of the city as we can, we are also here to visit with friends from Hong Kong and on each of our days here we have made plans to connect with people we got to know during our six years in Hong Kong. Today we spent the afternoon with Rosana. She was a student in my advisory throughout her high school years, and the ten kids in her group felt like my children by the time they graduated. She was also a student in my Journalism class and in Dave’s PE class. 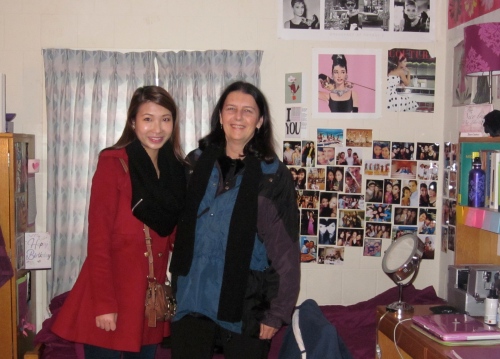 Rosana is studying at Northwestern University in the Evanston area of Chicago. It is in a lovely old neighborhood and driving there we passed all these stately mansions on tree-lined streets. Rosana took us to see her dorm room which she shares with a young woman from Ann Arbor Michigan. Luckily it was study week at Northwestern so Rosana didn’t have classes and she had time to show us around the campus.

Northwestern University was founded in the 1850’s as a private Methodist school, so many of the buildings are very old. Rosana and Dave are standing outside one of the buildings where Rosana takes a number of her English classes. She is studying literature,specializing in Russian literature but is thinking of transferring to the school of journalism for her last two years. She writes for The FlipSide, one of the on-campus student publications. She has classes with as many as 700 students and says she doesn’t really get to know her professors. Teaching assistants grade all her work. I thought about how different university must seem for the ICS students who are used to small classes and close relationships with many of their teachers.

Rosana said we should take a picture at The Arch which is a well known campus landmark. Students often say, “Meet me at the arch.” Northwestern has 16,000 students.

We had lunch with Rosana and her boyfriend Kevin, a mechanical engineering student. He and Rosana had just returned from Boston where they spent the American Thanksgiving holiday with Kevin’s family. Kevin visited Rosana’s family in Hong Kong last summer. He is a competitive swimmer for Northwestern and told us about a walker he designed for seniors as a project in one of his classes. The walker is in the process of being patented. It was so nice to reconnect with Rosana and to meet her boyfriend. 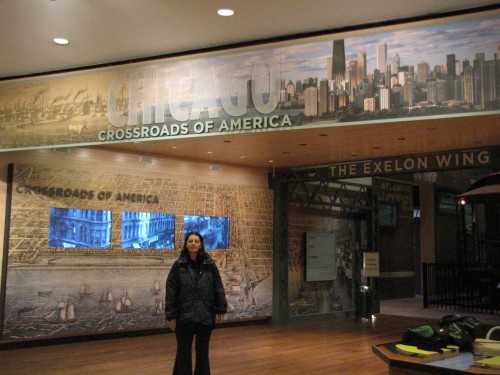 We spent our morning at the Chicago History Museum and learned all about the city in the Crossroads of America displays.

We learned about the industries that made Chicago a thriving economic centre, the hogs, breweries, furniture production, steel and the mail order business.

We learned all about the things that were first made in Chicago– Lincoln Logs, Tinker Toys and the game Mouse Trap, doublemint gum, the birth control pill, bowling balls, Cracker Jack, Morton Salt and Playboy Magazine to name a few.

We learned about some of the crisis events in Chicago’s history– The 1871 Great Fire, the 1930’s and 40’s when Al Capone and organized crime controlled much of the city, the Race Riots of 1919 and the protests at the 1968 Democratic convention.

We had supper at Trattoria Roma on Wells Street since we were going to the nearby Second City to see a comedy show after dinner. The food was excellent!

The 25-year-old restaurant had signed photos from patrons like Paul Newman, Nia Vardalos, Jerry Seinfeld and Jay Leno. Our Second City show was a not a huge hit with us. It was called a Dysfunctional Holiday Review.  Maybe I’m a prude but too much of the humor involved bad language and sexual innuendo   for my liking. Second City has been the training ground for many of the greatest comedians of all time and it was interesting to read the names of the alumni like Alan Alda, Tina Fey and Bill Murray.

It was a great first day! What next? Tomorrow we are going to spend the day with our friends Aaron and Kelly Weiss and their daughter Cora.