Getting a Good Night’s Sleep

My husband Dave sometimes has trouble sleeping.  It makes me wish we could set up a ryokan in our house.  When we were in Japan we spent four nights in a ryokan and Dave says those were the best nights of sleep he’s ever had.

In the one hundred and thirty year old Matsubaya Ryokan in Kyoto we slept on the floor on a futon. Rooms in a ryokan are like those in a traditional Japanese house. Doors are made of rice paper and the polished wood floors are covered with tatami mats woven from rice straw. The main room of a ryokan suite effectively serves as the living room, bedroom, dining room and study. 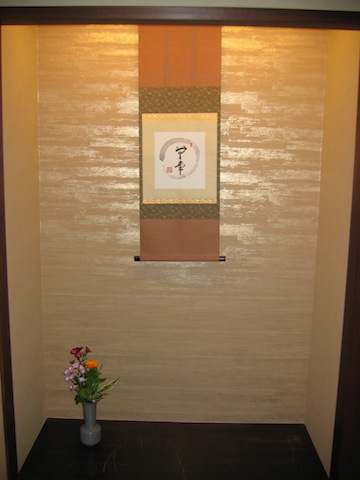 Our room had a little alcove called a tokonoma. The floor was slightly raised and there was a scroll with some Japanese calligraphy hanging on the wall. A simple flower arrangement was set in a vase on the floor of the alcove. The alcove was an area for quiet meditation. 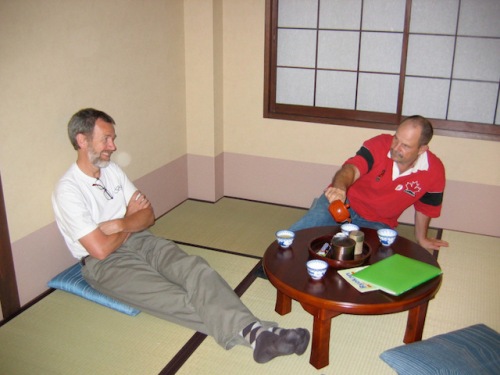 In the centre of the room was a low table with cushions for sitting. We had tea or wine there in the evenings with our friends who had the room next to ours in the ryokan. On a tray in the centre of the table were a teapot, teacups, a box of tea and a metal container called a koboshi where we could put our used tea leaves. 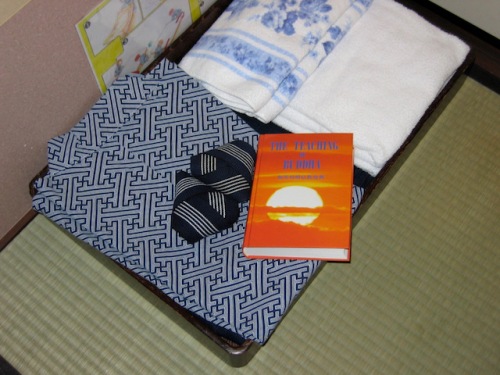 Another tray on the floor held our towels, a copy of the Buddhist scriptures and our kimonos. Each day after the maids cleaned our room, freshly laundered, neatly folded kimonos and kimono sashes, were laid out on our tray. We could wear our kimonos around the ryokan, including down to the compact dining room for breakfast. The eating area looked out onto a beautifully kept Japanese garden that featured ferns, bamboo and palm trees and a pool with gold fish.

You couldn’t wear shoes in our ryokan. These had to be left at the front door along with those of all the other guests. We went to our rooms in stocking feet. 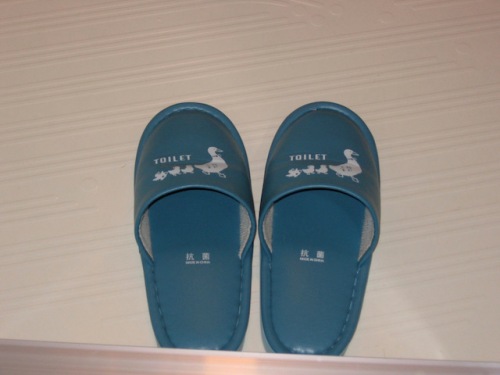 Special blue rubber slippers labeled Toilet and sporting pictures of little white ducks were carefully placed at our washroom entrance. The floor in the bathroom could be cold and wet so the rubber shoes came in handy.

A unique sign on our toilet door made it easy to locate. 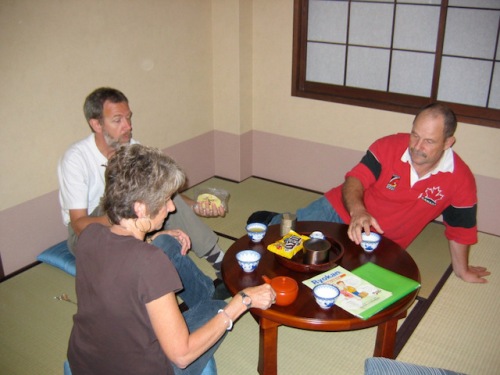 Hundreds of years ago a powerful Japanese shogun named Tokugawa created peace by forcing each of his lords to come to Edo (modern day Tokyo) the country’s capital twice every year. The lords were so busy traveling back and forth to Edo they had no time to fight with each other. These lords needed nice places to stay as they traveled. That’s why ryokans were begun.

Ryokans are great. I wonder if we could re-create one here in our condo in Winnipeg. Anyone looking for a king sized bed?  Maybe we should replace ours with some tatami mats and a futon so Dave could get a good night’s sleep.

Take Me Out to the Ball Game Osaka Style