I’m taking a course with Roland Penner a well-known Manitoba lawyer. Our class is called Winnipeg Fact or Fiction. In my first post about the course I wrote about the Winnipeg Strike. Our second class was about a famous Winnipeg criminal, Kenneth Leishman. Roland was intimately familiar with his case because he defended Leishman’s accomplice Harry Backlin in court. Although Leishman’s story honestly sounds like fiction, Roland gave us a good factual account of what actually happened.

March 3 of 1966 Ken Leishman masterminded the theft of nearly $400,000 in gold bars from the Winnipeg International Airport and he almost got away with it. The gold was coming into Winnipeg from Red Lake, en route to the mint in Ottawa and Ken knew it had no police protection as it was moved from the plane to the airport. He took advantage of this and posing as an Air Canada driver intercepted the gold and drove away with it.

Harry Backlin, a lawyer Ken had known in prison was part of the scheme. He was on a planned holiday in California so it would look like he wasn’t involved. On his return from the United States Backlin was going to take the gold to Hong Kong and sell it. Ken went to Harry’s house right after the heist and told Harry’s mother-in-law who had not gone to California, that he was Harry’s friend and was going to store some moose meat in his freezer. That’s where he stashed the gold, planning to pick it up the next day and take it to his uncle’s farm in Treherne.

Unfortunately for Ken a huge blizzard hit Winnipeg that night and he couldn’t get out of the city in the morning. In desperation he hid the gold in the snow banks in Harry’s backyard, which made Harry pretty upset when he arrived home. Harry’s plans to go to Hong Kong were thwarted when there was a problem with his passport so Ken decided to go to Hong Kong to sell the gold himself. He sawed off a piece of gold to take to Hong Kong in his briefcase as a sample to sell. However Ken needed a small pox vaccination to go to Hong Kong. Harry arranged one with a friend who was a doctor. There was supposed to be a seven-day waiting period after a vaccination but Ken convinced the doctor to lie and put the wrong date on the vaccination form so he could leave Canada right away. The doctor feeling guilty confessed what he’d done to a friend who was a police officer. The police officer recognized Ken’s name. Ken had been high on the police list of suspects for the gold robbery because of his previous criminal activity.  The RCMP made plans to arrest Ken in the Vancouver airport when he arrived there on his way to Hong Kong. Ken managed to get out of the airport long enough to get rid of the gold in his briefcase before he was arrested. It was never found.

Ken made the mistake of explaining the robbery in detail to the man sharing his cell in Vancouver. He was an RCMP agent incarcerated with Ken for the purpose of extracting incriminating information. After Ken’s Vancouver jail house confession the gold was dug up from Harry’s backyard and Ken was sent to jail in Headingly, Manitoba to await trial.

Unbelievably Ken managed to escape from Headingly, was recaptured in Indiana and sent to the Vaughn Street Detention Centre and he escaped from there too. Finally he was tried, convicted and sent to prison for twelve years, however he managed to get out of prison after just eight years for good behavior.

Following his prison release Ken and his wife Elva and their seven children moved to Red Lake where they opened a store and Ken became a pillar of the community, even serving as president of the Red Lake Chamber of Commerce.

Ken, a former pilot began flying mercy flights taking people from northern communities to hospitals. In 1979 while flying one of these mercy flights his plane went missing. It took almost five months of searching but remains of the aircraft and human bodies were eventually found. 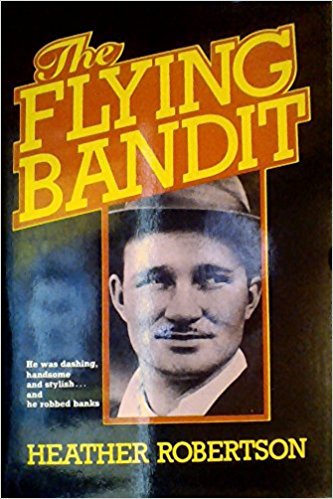 My course with Roland Penner is called Winnipeg Fact and Fiction and for each event in Winnipeg history we study, Roland recommends several fictional accounts. I read Heather Robertson’s The Flying Bandit. It is fiction, because Heather invents conversation and actions and scenes, but she does stick very closely to the actual events that happened.

I liked the book because I learned lots more about Ken Leishman’s personal life. He had a difficult childhood. His parents divorced. He was in a series of foster homes and lived for a while with very strict and unaffectionate grandparents. I truly admired his wife Elva who stuck with him through everything and raised their seven children. I also learned about the crimes Ken had committed before the gold heist– two bank robberies and a break and enter at a furniture store so he could furnish an apartment to bring Elva home to after their wedding.  Ken was very successful for a time at selling Queen Anne cookware door to door. I can remember a salesman coming to our home to do a pitch for that cookware for my Mom.

Something interesting I learned from reading the book was that when Ken escaped from Headingly Jail in September of 1966 he went to Steinbach, where my family was living at the time, and stole a plane from Abe Loewen, a pharmacist my father knew well, since Dad was a doctor in Steinbach. Ken and three other Headingly escapees flew the plane to Gary Indiana before they were arrested.

Heather does a good job of helping us get to know Ken as a person. He truly believed he could get away with his crimes. He was a ‘nice’ man –polite, friendly, dressed neatly and fashionably, was faithful to his wife, loved his children, wrote poetry and secretly reveled in the fame his crimes brought him. 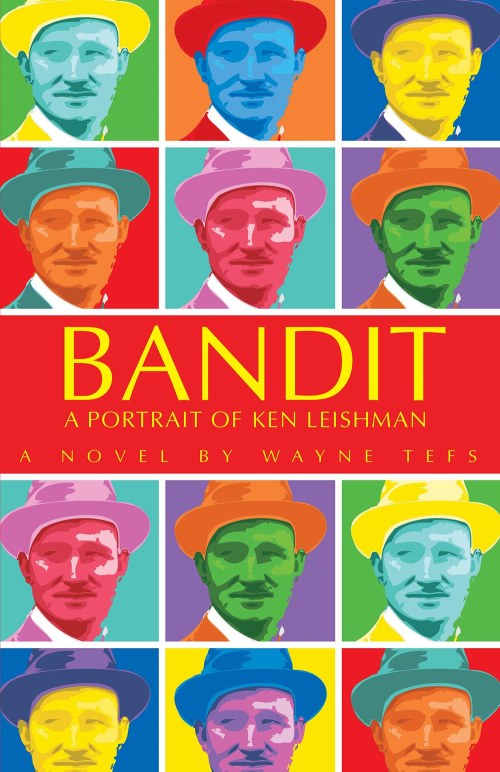 What next? I’ve just started reading Bandit, a novel about Kenneth Leishman written by Wayne Tefs. It has been nominated for five Manitoba book awards.

The 1919 Winnipeg Strike- Fact or Fiction