It’s huge!  I think I first learned about Pompeii in elementary school. I knew it was a Roman city enveloped by volcanic ash from Mt. Vesuvius in 79 AD. I also knew that in the mid 1800’s the excavation of Pompeii had begun.

Since then many visitors just like us have come from around the world to see Pompeii and get a first hand view of what life was like in ancient times. What I didn’t know was how huge an excavation project it had been and continues to be, and how much of the city had been unearthed.  We took a day trip to Pompeii during our stay in Rome. We had signed on with a tour company that provided a bus and a guide. 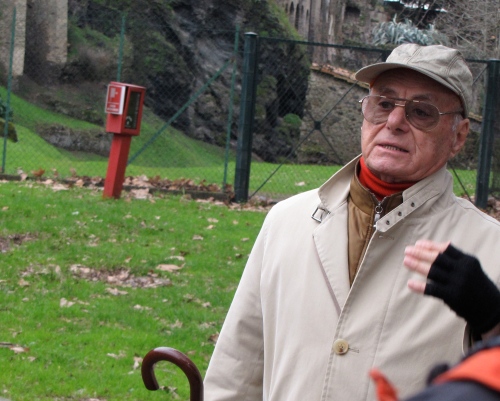 Mr. Franko, our elderly trip leader was a little absent minded and somewhat bossy, but I was still grateful to have him there to lead us around Pompeii.

I saw many people walking the stone streets with a map, like the one Dave is holding here. They had puzzled looks on their faces as they tried to figure out where they were.

The city streets are really a kind of maze but as you navigate them you see all kinds of businesses and houses……the villas of the wealthy, the homes of the poorer citizens, the bakeries, water fountains, marketplaces, inns and restaurants. 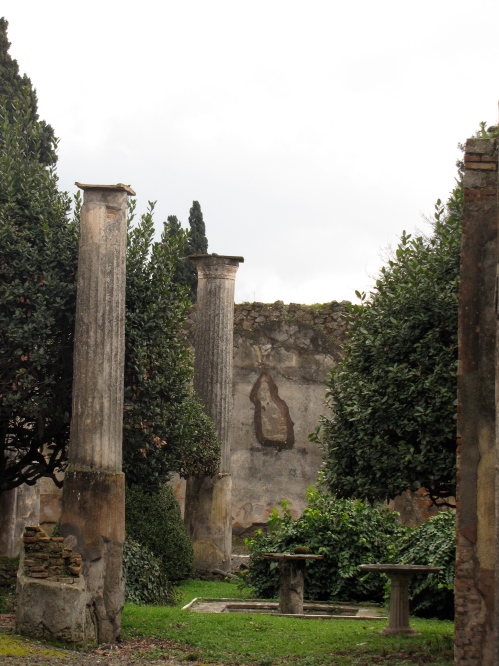 Pompeii was home to some 12,000 people. Although only about a third of it has been excavated so far, the scope of the project is far more massive than I had ever imagined. Much of what we know about life in ancient Rome we’ve learned from the city of Pompeii which lay well preserved under layers of soil and volcanic ash for one thousand seven hundred years. The people were obviously cultured. 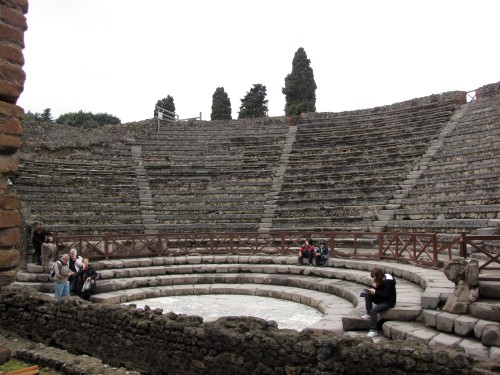 We saw the semi- circular theatre where poetry, music and plays were performed. But the Romans were also entertained by less refined things like the performances of gladiators in the city’s amphitheatre.

We saw the playing field where the gladiators trained. The bodies of some sixty gladiators were found in the barracks of the amphitheatre during the excavations. Beautiful young women in the brothels provided another form of entertainment.

Another kind of socializing went on in the bathhouses. We saw two bathhouses, one for men and one for women. Here people came to visit and sit in a series of pools with both hot and cold water.

Mr. Franko took us to the forum where we saw temples to Isis and Jupiter. The people of Pompeii were obviously religious. The forum was also the place where business was conducted. I was surprised to see all kinds of dogs wandering around in the forum.

Ancient Pompeii had many dogs. We even saw the frozen contorted form of one that died in the volcanic eruption.

The dogs that are in Pompeii today have been abandoned and left there by people who no longer want to look after them. The tourists feed the stray dogs and sometimes the guides who visit the site regularly with tour groups, pool their money to buy dog food.

More than 2 million people a year visit Pompeii. My tour group included people from Brazil, Japan, Russia, Jordan, the United States, Great Britain, Scotland, Ireland and Canada. We’d all heard about Pompeii and wanted to see it for ourselves.

A Bizarre Museum in Florence