He Thought His Buildings Were Alive 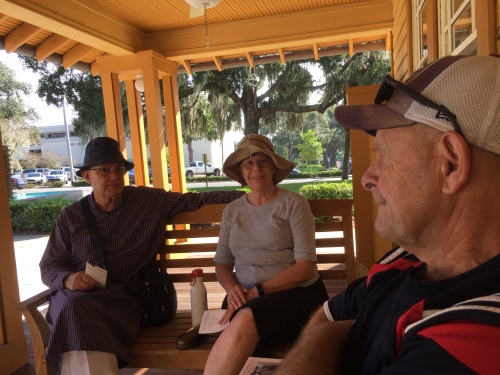 “I didn’t feel much like a father to my children, but I did feel like a father to my buildings.”  We took a tour of some of the eighteen buildings on the Florida Southern College Campus in Lakeland that were designed by the famous architect Frank Lloyd Wright. Apparently Frank thrived on being at the college campus and loved to hang out with the students and get to know them.

Unfortunately his love for, and interest in, the young people at the university did not extend to his own children.  Frank  was so busy with his career he had little time or understanding for his eight children, the result of three marriages. I first learned about Frank Lloyd Wright from reading Nancy Horan’s book Loving Frank which details an affair he had with a married woman who left her own children for him, and I must admit it left me with little respect for how he conducted his personal life.  Dave and I had also toured Frank Lloyd Wright’s Taliesan West campus in Arizona and his Oak Park Home in Chicago so we were interested to learn more about the famous architect and the work he did at a Florida college. 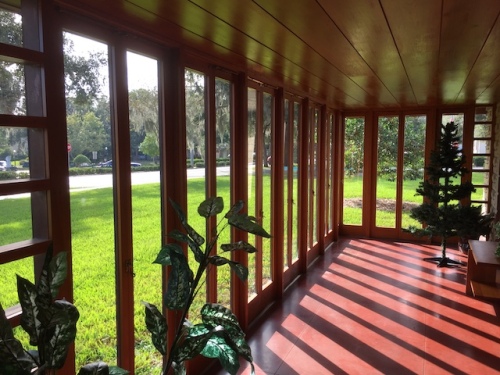 Frank Lloyd Wright designed homes like this one called The Usonian without curtains to let the ‘outside in.’  The way the sun reflected shadows onto the floors in  patterns was also important to him.

Wright believed buildings were alive which is why he used the color Cherokee Red in so many of his buildings- it reminded him of blood.  Check out the red floor in the Usonian house above.

Our friends Barb and John sit in chairs designed by Frank Lloyd Wright while our guide shares his encyclopedic knowledge of the designer and architect.

Frank not only designed buildings he designed their furniture as well.  Here I sit at a diningroom table he designed.  The place mats are based on window patterns in Frank Lloyd Wright buildings.

Frank drew the blueprints for houses like The Usonian for faculty and staff of the university to live in.

Wright also designed this Water Dome fountain at the centre of the campus which shoots water up to 45 feet into the air. It uses a great deal of water however so the full force of the fountain is saved for displays on special days on the campus like graduation. 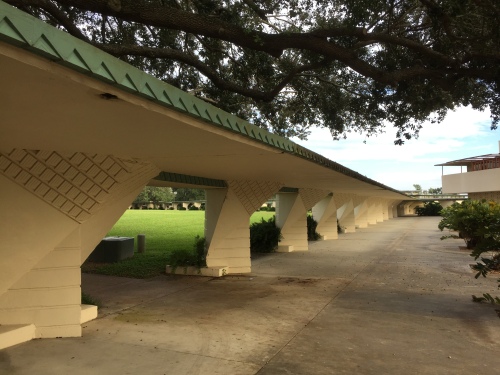 The various buildings designed by Frank Lloyd Wright on the college campus are connected with over a mile of esplanade. 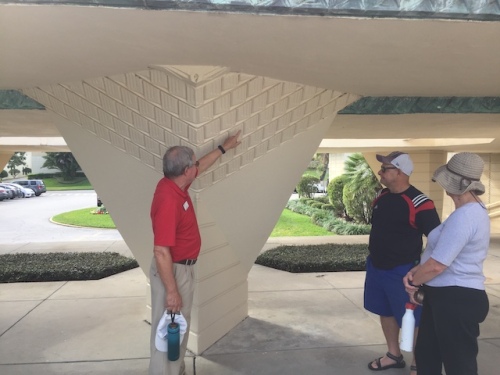 The supports were to be reminiscent of the orange trees that once grew all around the campus.

Each of these beds of green shrubs are exactly 10 feet apart which is how far orange trees are generally planted apart in an orchard.

Frank was always trying to imitate nature in his buildings.  He designed the ceiling of the library to look like the sun.

This overhang on one of his buildings features a butterfly design.

Check out the Cherokee red steps on the Annie Pfeiffer Chapel which Wright designed.

Inside the church- the facade which partitions off the choir and pipe organ from the sanctuary is decorated with origami shapes and re-creations of the First Nations symbol The Thunderbird.

Unfortunately the church like many other buildings on campus designed by Frank Lloyd Wright didn’t turn out to be as practical as they are beautiful. They have lots of construction problems and are constantly in need of repair. It is hard for the university to keep up financially with all the  work that needs to be done.

What Will You Be Building When You Have To Go?

Thinking About the Florida Keys

We spent time in the Florida Keys with our friends Rudy and Sue in 2014.  As I have watched the news about Hurricane Irma I’ve been thinking about that trip and wondering what has happened to the places we visited.

My friend Sue and I toured Ernest Hemingway’s house in Key West and saw the more than fifty cats that make their home there, direct descendants of a feline that was a gift to Hemingway from a Florida sea-captain.  Apparently during the hurricane a group of dedicated employees stayed behind to protect the Hemingway house and the cats even though authorities ordered them to evacuate and Hemingway’s granddaughter urged them to evacuate as well. 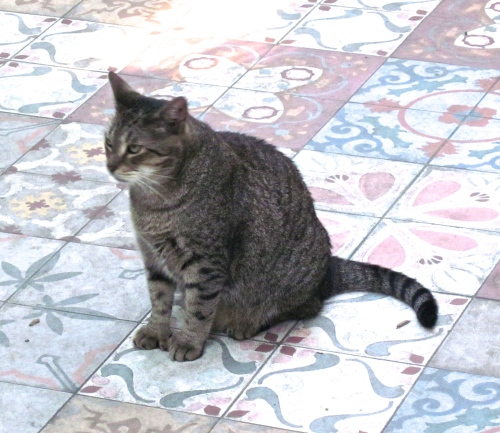 One of the cats I photographed on our visit to Hemingway’s House.

I’ve discovered that luckily both the museum staff and the cats survived the hurricane and Hemingway’s house was not damaged. 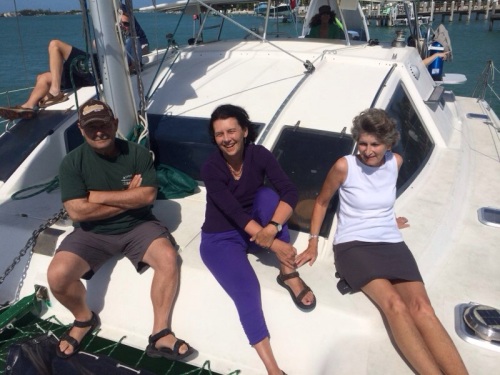 In Marathon Florida we went for a sail on a boat our friends Ed and Millie had worked on during an earlier visit to the Keys.  I have read that at one point Marathon was completely underwater and many marinas in the area look like giant shipwrecks.

I wonder how our boat the Geni Green and its Captain Jay fared? 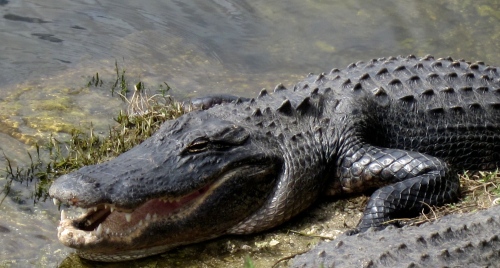 Another thing we did in the Keys was take a drive down Alligator Alley. We saw literally hundreds of alligators.

News reports say that thousands of these alligators have been displaced from their natural habitat because of the hurricane and some are wandering the streets of Florida’s cities and towns.

Having visited the Florida Keys the news I’m seeing about the devastation there seems just a little more personal. The Florida Keys was a terrific tourist destination.  Hopefully it will be able to rebound from this tragedy and become a beautiful place to visit once again.

Widow For A Week

I’ve been without my husband Dave for the last week.  He is down in Florida visiting our friends Jeff and Anna and their three children. It is school break week in Florida so Jeff who is a teacher, has been free to golf with Dave everyday. Yesterday Jeff sent me the photo above of Dave at Dunedin where the Toronto Blue Jays have their spring training games.

We got home from Arizona the first week of March and Dave swung right into substitute teaching.  By the end of last week he’d already spent eight days in the classroom and figured he’d earned enough bonus cash to take advantage of a cheap flight to Orlando he found online. I couldn’t go because I was booked to give tours at the art gallery, had student teachers to visit and a writing deadline to meet.

It hasn’t been all work and no play for me though. I’ve had supper with a friend, enjoyed a lovely meal at the home of my brother and his partner, taken dinner over to share with my aunt who is recovering after having emergency hip surgery, and spent an evening with my writing group.

Dave will be home on Sunday.  I’m happy he’s had a good time, but I’ll be glad to have him back. I guess after nearly forty three years I’m so used to having him around things just don’t seem quite right when he’s gone.

Other posts about our Florida friends Jeff and Anna…….

Inspiration on the Links 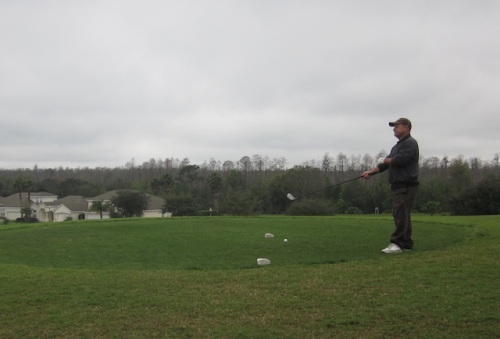 In Kissimme Florida we golfed The Legends of Orange Lake course with my brother-in-law Paul and my sister-in-law Shirley.  The course is the result of team work between two legends– business tycoon Kemmons Wilson who founded and owned the Holiday Inn chain of hotels and Arnold Palmer one of the greatest American players in the game of professional golf. 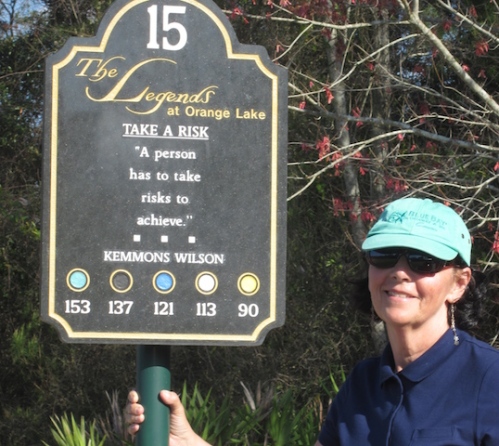 A person has to take a risk to achieve.

Each hole featured words of advice either from Wilson or Palmer about how to achieve success on the golf course and also in life. I didn’t take photos of the advice signposts at every hole but here are a few.

Success requires half luck and half brains.

Climb the ladder of success one step at a time.

A person might be walking around lucky and not know till they acted.

I’d rather win one touranment in my life than make the cut every week.

Other posts about golf…….

What To Pray At A Golf Tournament

” The best part was playing catch.”  That’s what our nephew Tim posted on Facebook this morning. He took his sons to Florida for three days of fun that included trips to Animal Kingdom, Universal Studios and an air boat ride to see alligators.

This family photo was taken after we’d been out to dinner and a magic show.

We were fortunate to share one day in Florida with Tim and his boys. Despite all the fun things his Dad had planned one of our great nephews still reported that playing catch had been the best part.

When you love baseball and live in a place where ice and snow prevents you from playing outdoors for many months getting a chance to throw the ball around outside is special.

Early in the morning I took these photos from the balcony of our room. Dave was outside in the parking lot playing catch with his great-nephew. Dave had brought his glove along hoping to get in a little throwing practice on our vacation

Last year Dave had to bow out of his season with his ball team because he had hip surgery.

He’s hoping to be back out on the field in a couple of months, so he was happy to have a chance to do a little warming up with his great-nephew.

Other posts about baseball…….. 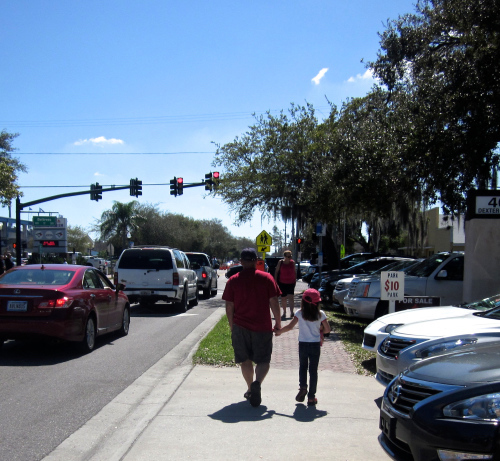 Today we went to Dunedin, Florida with our friends Jeff and Anna and their children to watch the Toronto Blue Jays play the New York Yankees in a spring training game. The Jays didn’t do very well but it was a beautiful afternoon to be watching ball. 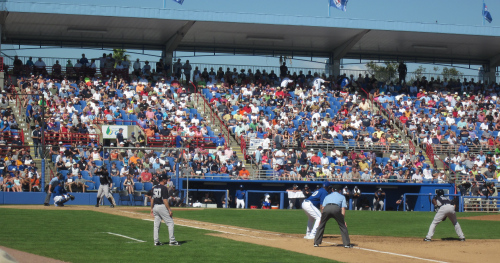 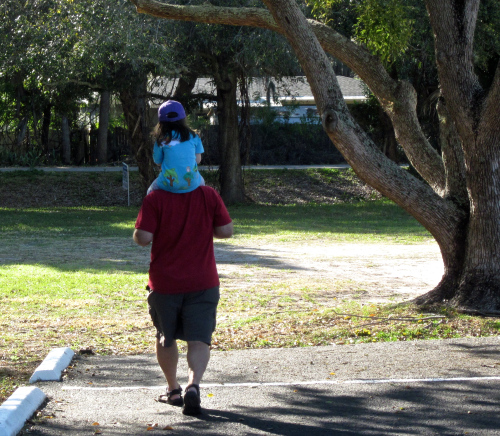 Other posts about professional baseball ………….

The Detroit Tigers- In The Pink

The Tigers Met the Yankees and We Were There