Get Smart, Crokinole And Ping Pong

Recently Canadian Mennonite University published this photo on social media of students hanging out in a lounge  playing video games together. My how times have changed I thought. But……… then I remembered the shared screen time and games that were popular when I was a student at the same university/college in the early 1970s.

Many of us would congregate in front of the television screen just before supper to watch reruns of the popular comedy Get Smart. In the show a bumbling detective named Maxwell Smart also known as Agent 99 and a smart savvy female investigator Agent 86 tried to protect the world from the evil KAOS organization. 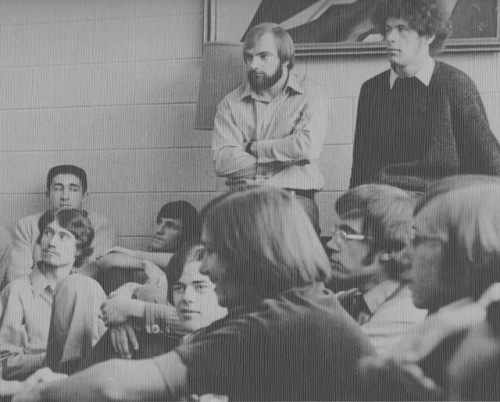 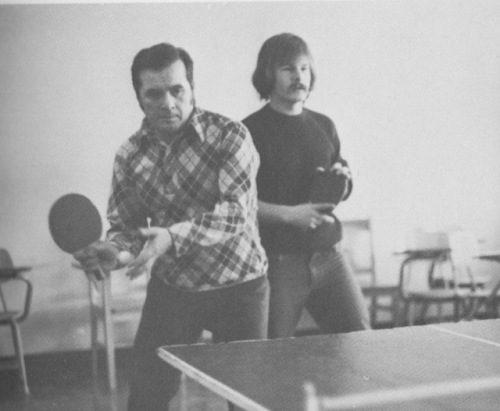 My husband playing ping-pong with a CMU classmate in 1974

We didn’t play video games in the early 1970s but ping-pong and crokinole matches consumed endless hours of students’ time. 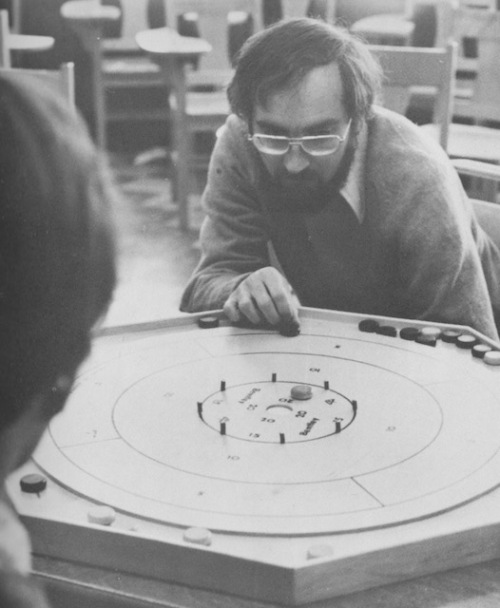 By the way I noticed in this photo that current CMU students are sporting fairly long hair and that is something that was also popular in the early 1970s as my husband’s 1973 yearbook photo illustrates. 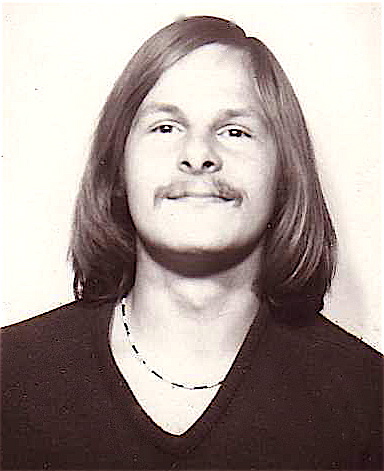 Maybe times haven’t changed that much.

And A Baby Cried

Meet You At the Folio

A Chat With My Old Professor

And A Baby Cried

On Saturday afternoon I was at Canadian Mennonite University enjoying their annual showcase called Christmas at CMU.  The women’s choir under the direction of Janet Brennerman was performing The Magnificat by Z. Randall Stroope an absolutely divine musical interpretation of the hymn Mary sings while visiting her cousin Elizabeth. The birth of Mary’s child is imminent and in the words of her song she is imagining how her son might change the world.

Stroope’s version of The Magnificat  has this lush and truly grand duet accompaniment and when the two female musicians at the piano and the fifty- three members of the choir reached the Glory section of the lyrics I got tears in my eyes listening to all those bold and talented young women proclaiming the powerful message of the text with their loud, strong voices.

After the next line  “as it was in the beginning” there was this ever so slight pause in the music and just at that moment a baby in the audience cried.  Rather than detract from the performance it was the perfect accompaniment to the text as the choir continued “is now and every shall be.”

Sometimes I think about how difficult it must be in our present day to decide to bring a child into the world, a world racked with war and the approaching doomsday effects of climate change, a world where people seem so divided, where so many have lost their homes and lives to violence.

But then I think about how some of those children coming into our world right now are going to change it, make it a better place just as Mary imagined her child would. Maybe it will be that baby who cried out during the performance of The Magnificant on Saturday who will bring about some of those positive changes.

Could it be that  as it was in the beginning for Mary as she waited for her child’s life to begin it is now and every shall be for new parents and the rest of us who wait expectantly for God’s peaceful kingdom to become a reality here on earth?

Right to Have Children?

Must We Live in Fear?

God of Eve and God of Mary

Meet You at the Folio

One of the favorite places my friend Esther and I like to meet for visiting and sketching is the beautiful Folio Cafe on the Canadian Mennonite University grounds at the corner of Grant and Shaftesbury Avenue.

There’s a patio where you can eat on nice days.

The lunch items are delicious.  Homemade soups and sandwiches and desserts.  Last week when I visited I ordered the beef borscht and a sandwich with goat cheese and marinated tomatoes on crusty fresh bread.

For dessert there was a lovely latte and gelato. 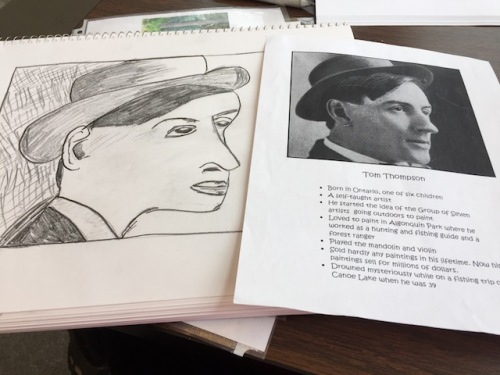 The Folio Cafe is spacious and welcoming and it is easy to spend several hours there visiting and drawing in the comfortable airy space the cafe provides.  If you’ve never been to the Folio I suggest  you give it a try.

A Blast From the Past Closes

I was attending Bachtoberfest: An Evening in Leipzig at Canadian Mennonite University. A quartet of talented singers  performed excerpts from a hunting cantata composed by Bach to serve as dinnertime entertainment at the 1713 birthday party of a German duke. The celebration was held in the duke’s hunting lodge.

Guess who the main cantata characters were?   Diana, goddess of the hunt performed by soprano Rose van der Hooft, Endymion, Diana’s lover whose part was sung by tenor Nolan Kehler, Pan god of nature sung by bass Matt Baron and Pales goddess of shepherds and flocks sung by Lynette Ens.  It was the first time I’d heard the cantata and it was delightful.

The Olympus exhibit at the Winnipeg Art Gallery has helped me become familiar with so many Greek and Roman gods.  It’s fun to see where else in Winnipeg I can spot them!

Last week I attended the funeral of a former Canadian Mennonite University professor of mine. David Schroeder, affectionately known to his students as Doc Schroeder, was lauded at his memorial service for being a kind and caring person, whose gift of facilitating reconciliation helped to make the Mennonite church more welcoming and accepting.

It was in Doc Schroeder’s New Testament class in the early 1970s that I came to understand the pivotal role women had played in the Biblical story. My final paper was titled Women in the Life of Jesus. Doc Schroeder gave me an A.

Thirty years later I was working as a religion columnist for the Winnipeg Free Press and received a letter from a reader who said the Bible clearly stated that women should be silent on matters of faith. He said it was inappropriate for me to be writing about religion in a newspaper.  In reply to my critic I wrote a column about women in the Bible and about Canadian women of faith who had not been silent and had used their voices to bring about positive change in society. 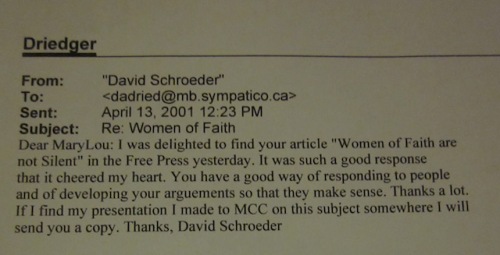 A few days after the column was published I received an e-mail from Doc Schroeder, my former professor, telling me that my article had cheered and delighted him. It felt great to receive such affirmation, especially since it came from the teacher who had first helped me understand the key role women played in the faith stories of the Judeo-Christian tradition.

Listening to the tributes at Doc Schroeder’s funeral it was clear I was only one of many people he had affirmed and supported and encouraged in his lifetime.

A Chat with my Old Professor

A Chat with my Old Professor

I attended a drama evening staged by the Winnipeg Mennonite Theatre on Friday night. I arrived well in time, and as I settled into my seat, I realized that sitting right beside me was a former professor of mine.

Dr. Waldemar Janzen taught the Old Testament course I took at Canadian Mennonite University in 1971.  I told him what an impression that course had made on me in my first year of religious studies. One of our assignments was to do a book review and I had to read the book Yahweh and the Gods of Canaan by Albright.

I remember how shocked I was to learn that the Israelites had been so heavily influenced by the mythology and religion of the Canaanites and Phoenicians who lived around them. There were many similarities between the Israelites’ god Yahweh and the Canaanite god El and the Canaanite hymns to El appeared to have been adapted by Israel. I was also taken aback to find that the creation story in Genesis had many similarities with Canaanite creation myths. I remember going into Dr. Janzen’s office one day and telling him how upsetting it was for me to discover that the Israelites may have sort of cobbled together a creation story using the stories of those people living around them. I was pretty naive and this was my first time studying the Bible academically. I had never given the origins of the Biblical material much thought or any study. Dr. Janzen was very reassuring. I left his office with a new realization that it had been the purpose of the story that was the primary concern. The Israelites wanted it known there was only one God and that God had created the world. The possible source of the story was not as important as its message.

Dr. Janzen had several often repeated themes that ran through our Old Testament class. I took that class over forty years ago but I haven’t forgotten them. One was promise and fulfillment and the other was the important link between geography and faith. For the essay question on our final exam Dr. Janzen asked us to write about the geography of our own faith. How had the places we and our families had lived impacted the development of our faith? I remember how much I enjoyed thinking about and answering that question. Having grandparents whose faith had sustained them when they were forced to leave their country of birth for a new one, and growing up in a relatively conservative, almost exclusively Mennonite town, there were certainly geographical influences that had impacted my faith. ( I’d like to write that essay now again. This time I would describe how  living and working in Asia influenced my religious ideas.)

Dr. Janzen had also taught my daughter-in-law and remembered her because she had been such a good student. He asked about my family and told me what his own children were doing. It turns out both my son and his son were working on masters degrees at the University of Ottawa at almost the same time.

What next? Dr. Janzen told me he had finished an autobiography that traced the early years of his life called Growing Up in Turbulent Times. I certainly want to read it. I looked it up today and discovered that it has received excellent reviews. He told me he was also working on a response or commentary speaking to a recently published piece by another scholar that suggests the Old Testament should be censored, I suspect to purge it of some of its more blood thirsty and explicit materials. Dr. Janzen, is suggesting helpful ways to look at those sometimes troubling parts of the Old Testament. That sounds like it would be interesting reading as well.

Dr. Janzen has written many books perhaps most notably a book about Old Testament ethics and a commentary on Exodus.

Dr. Janzen was obviously a good teacher. Four decades after I was in his class I still remember some of the things I learned from him. He is also an interesting person to visit with and a thoughtful listener. I’m glad I happened to be sitting beside him on Friday night.