Canada A Country For All Seasons

Winter skiing with my family in Banff Alberta

Winter 1956 -Playing outside with my friend MaryJane in Winnipeg Manitoba

Winter skating on the Red River in Winnipeg

Spring visit with my 96-year-old aunt under a birch tree in Saskatoon, Saskatchewan 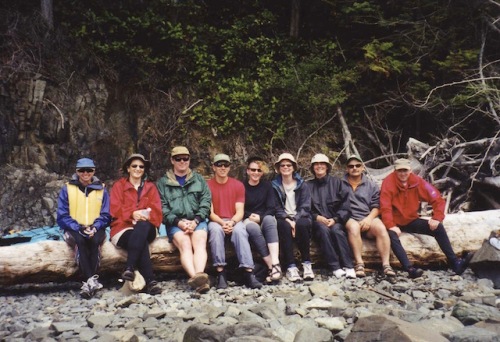 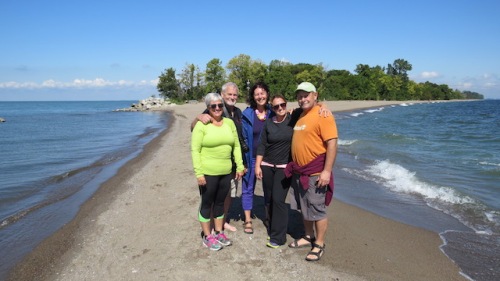 Strolling through the gorgeous fall colors in Quebec

On Canada Day it’s great to remember that you can have a good time in every season in every part of Canada.

Canada Day at the Forks

I Could Cry I’m So Happy To Be A Canadian 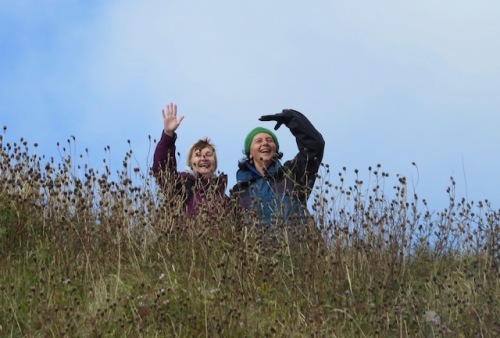 With my cousin Lynne on Signal Hill in St. John’s Newfoundland.

On a walk on a crisp autumn day in Quebec City Quebec.

In the doorway of Lucy Maude Montgomery’s House in Cavendish, Prince Edward Island.

With my daughter-in-law and her sister and two of Canada’s famous five suffragettes in Ottawa, Ontario.

With my husband Dave tubing at Moose Lake Manitoba. 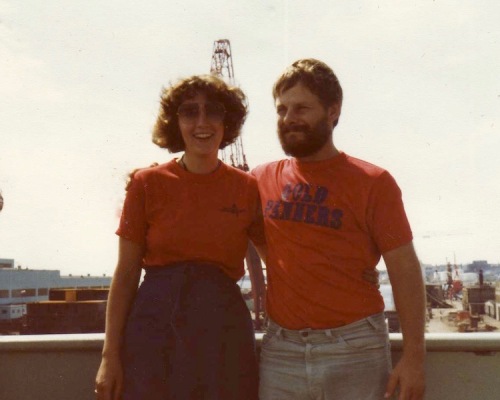 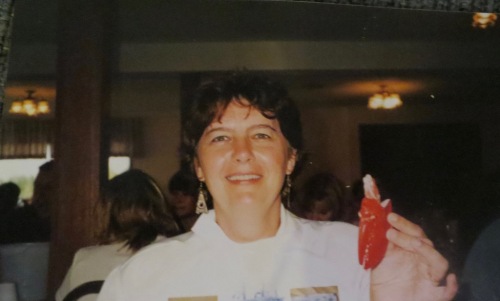 On a birthing stone at Ancient Echoes Interpretative Center in Hershel Saskatchewan.

With my family on a skip trip in Banff, Alberta.

With Dave (we are second and third from the right) on a kayaking trip in Johnstone Strait in British Columbia.

On the Eastern Edge of Canada

Tagged as canada day, travel to all the provinces

We had a fun time down at The Forks celebrating Canada’s 150th birthday. 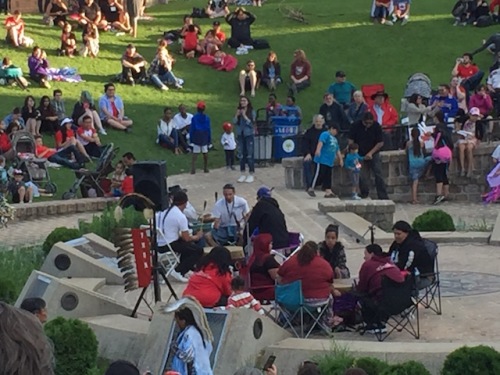 Hanging out at the Oodena Celebration Circle listening to the amazing aboriginal drummers and watching the First Nations dancers. 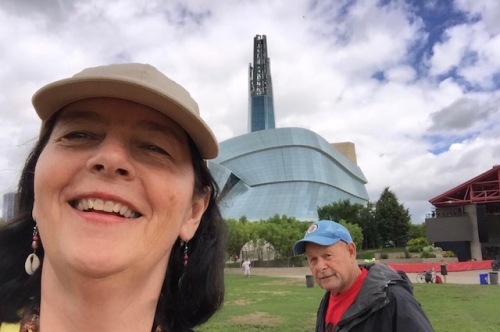 Checking out the Human Rights Museum and bumping into old friends Robin and Craig.  It was so great to catch up with them. 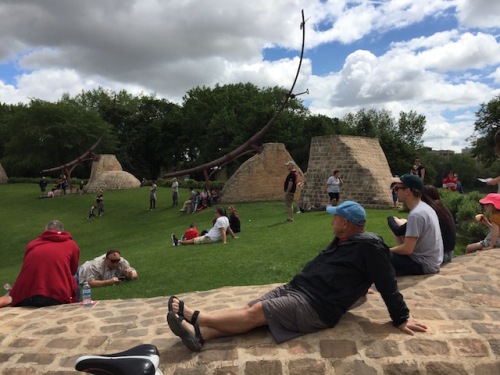 People watching and marveling at the diversity of the Canadian population. Some people have been in our country for thousands of years, others for a few generations and some have just arrived. We represent so many races and cultures and religions and languages and that was in very clear evidence watching the crowds of people down at the Forks yesterday. 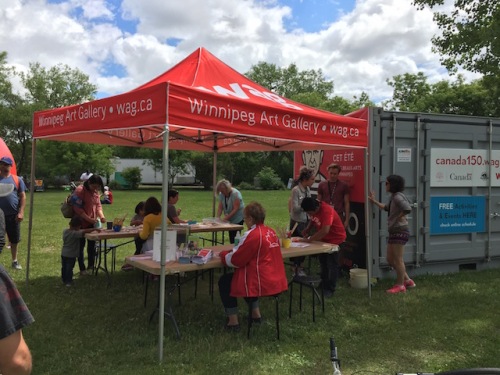 Visiting my colleagues at the Winnipeg Art Gallery container where they were inviting visitors to design their own Canadian flag. 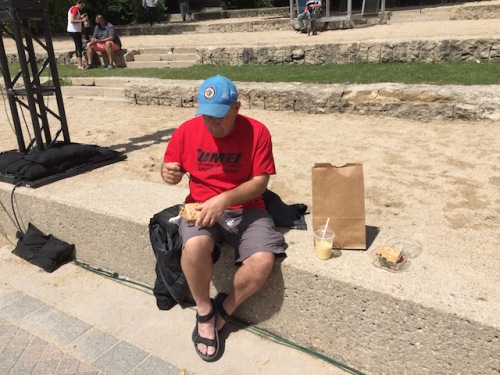 Enjoying some great food from Nu Burger down on the river front while listening to the Riel Mens Chorus sing. Here we bumped into our friends Werner and Adelia and had  a nice visit with them.

Listening to our friends Bruno and Caroline perform with the Winnipeg Philharmonic Choir.  They sang O Canada in both languages, and a wonderful variety of pieces including an Inuit song, Leonard Cohen’s Hallelujah and an arrangement of Oscar Peterson’s Hymn to Freedom that included these words………….  When every hand joins every hand and together moulds our destiny, That’s when we’ll be free.

Treking to the Tip of Canada

I Could Cry I’m So Happy to be a Canadian

She’s in Canada and she cries! In the most recent episode of  the television series The Handmaid’s Tale a young woman is on the run trying to escape sexual slavery at the hands of the patriarchal, religious, totalitarian regime that governs the United States. She finds herself in a barn where a truck is stored.  She has no idea where she is but she has been running for a very long time through forests and fields. She falls down on the ground in exhaustion and reaches up her hand to wipe the snow and grime off the truck’s licence plate so she can read it.  It says ONTARIO and she weeps with joy and relief.

That scene made me cry. I have never been happier to be a Canadian citizen than I am this Canada Day.  I know it isn’t something to take for granted and I also know Canada has many problems it still needs to work on, (see yesterday’s post) …….. but right now I am awfully happy to live in a country where I know people can legally love and marry whom they want, where women have control over their own bodies, where the government’s cabinet  is gender equal, where we welcome refugees, where what scientists have to say about climate change is given credence,  where health care is free to all and where we have sensible laws about gun ownership.

I am enormously grateful to Canada for letting my grandparents and my husband’s parents come here when they were in such desperate circumstances, and giving our families the opportunity to build meaningful rewarding lives that have contributed to making Canada a better place.

Let Me Count The Ways

On Canada Day I thought I’d celebrate the fun I’ve had in so many different places in this great country.

Attending the national fastball championships in St. John, New Brunswick with my husband who was on the Manitoba team.

Dressing up in the musee place de royale in Quebec City, Quebec.

Skiing with my family in Banff, Alberta.

Skating on the Red River in Winnipeg, Manitoba. 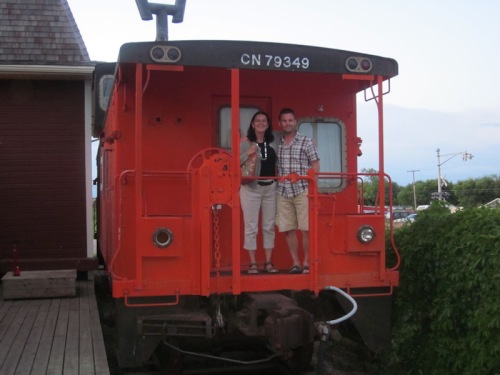 Having dinner and seeing a show at the Station Arts House in Rosthern, Saskatchewan.

Checking out interesting artifacts at the Royal Ontario Museum in Toronto, Ontario.

The only province I haven’t had fun in yet is Newfoundland.  And it’s on my bucket list!

Celebrating my Birthday in Quebec City

Skating on the Red River 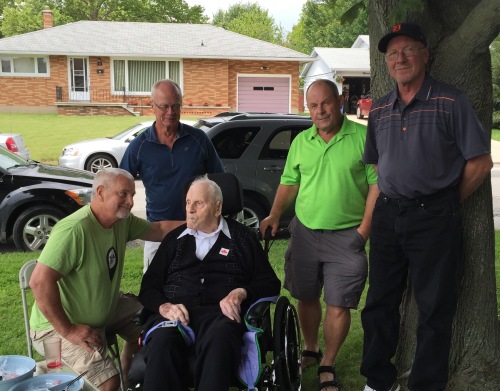 Dave and his brothers with their Dad

After our walk we had some of Shirley’s delicious muffins and a special smoothie for breakfast and then Dave’s brother John popped in for coffee before we all headed off to a Canada Day picnic at the Leamington Mennonite Home where Dave’s Dad is a resident. 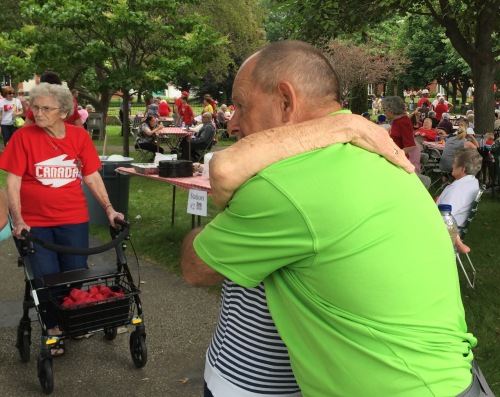 There was a band playing, short speeches by dignitaries, lots of great food and a chance to visit with friends and relatives. Several of Dave’s aunts were there too and we met a number of Dave’s highschool friends whose parents are also residents of the home.Then we were off to the Erie Shores Golf and Country Club where Dave’s brother Paul is a member for a round of golf.

Dave listens to his sister-in-law Linda tell a story

For supper our nephew Tim had invited everyone in the family over to his new house. He and Penny provided a delicious meal, the kids had fun in the pool, there was lots of visiting

and teams were made for an upcoming family golf tournament later in the week organized by our nephew Michael.

We’d had such a busy day we didn’t stay up for the fireworks.  Happy Canada Day everyone!

He Hasn’t Lost His Sense of Humour

Treking to the Tip of Canada

We share a national holiday! Sunday was Canada Day, the official birthday bash for our country. There were parades and fireworks, speeches and sporting events. Canadian artists performed and politicians presided at all kinds of festivities marking our 145th year as a country independent of Britain.

We lived in Hong Kong for many years and they also have a national holiday on July 1.  Their July 1 holiday recognizes the hand over of Hong Kong to China in 1997 and the end of 156 years of British control. The celebrations this year were special because they marked 15 years of independence from Britain.

China’s president Hu Jintao was in Hong Kong to lend an official presence to the 2012 National Day celebrations and swear in businessman Leung Chun-ying as the new leader of the territory. Leung, a police officer’s son, replaces career bureaucrat Donald Tsang, who took office in 2005 and cannot serve another term. There was also a spectacular fireworks display sponsored by the Chamber of Commerce that lasted 23 minutes. Huge crowds turned out to view the fireworks at Victoria Harbor.

Hong Kong is not like the rest of China. Designated a ‘special area’ the people there have certain political freedoms other places in China do not. One is the right to peaceful protest. The National Day celebrations on July 1 this year included a protest rally. According to CNN nearly 400,000 people came out on July 1 to protest the fact that Hong Kong citizens have not yet been given the right to democratically elect their politicians. They are also concerned about the worsening pollution, soaring real estate prices and the ever-widening gap between rich and poor.

Here in Canada July 1 was also marked by protests. Many communities had Stop Harper demonstrations. Stephen Harper is Canada’s prime minister.  People are upset about Harper’s Bill C-58 because it will eliminate many important environmental protection  agencies and protocols, change old age security and amend fair wages legislation. In Osborne Village in Winnipeg where I celebrated Canada Day they held a funeral for the country.   There was also a Twitter protest on July 1 against Harper called Denounce Harper.

Last year I spent July 1 in Hong Kong. This year I spent it in Canada. The national celebrations in both countries are much the same– a celebration of freedom from British rule and citizens using their freedom of speech to express their opinions.