I was intrigued by this artwork in the center of a large round room at the Art Gallery of Ontario.  Our guide told us the piece was called Old Sun and was by Blackfoot artist Adrian Stinson.  Old Sun was a relative of Mr. Stinson’s and a revered medicine man, warrior and leader among the Blackfoot. He refused to sign Treaty 7 with the Canadian government and thought it would be better to fight and die to preserve the Blackfoot way of life. 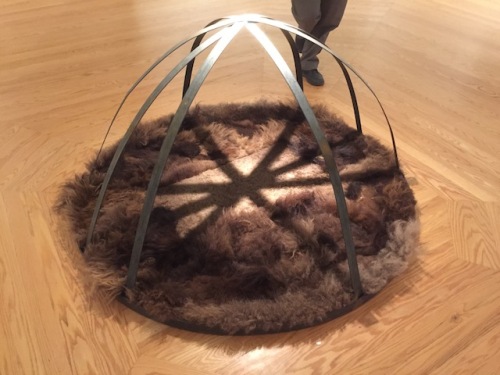 If you look carefully at the artwork you can see it is made out of bison fur which represents the Blackfoot ties to the land but the light above casts an image of the Union Jack on the fur- a symbol of colonization.

Old Sun is displayed in a room full of works by artists from the Group of Seven who were painting at the same time as residential schools like Old Sun, the one on the Blackfoot nation, were in operation and at a time when indigenous artists would not have received recognition for their work nor would they have been invited to display it in publicly funded galleries as Mr. Stinson is doing today.

Also included in the room is an artwork by Emily Carr which she painted on Vancouver Island in 1929. It shows a church on the Mowachaht/Muchalaht First Nation.  Emily called her artwork Indian Church but in May of 2018 the Art Gallery of Ontario decided to rename it Church in Yuquot Village because they felt it was a less discriminatory title. The church is still standing but has been decommissioned by the Catholic hierarchy and now serves as a community centre in Yuquot.

The renaming of the Emily Carr painting, the inclusion of indigenous art in almost every room of the gallery, as well as didactic panels in First Nations languages, are some of the changes towards indigenization I noticed since my last visit to the AGO two years ago.

Art That Makes You Feel Sick 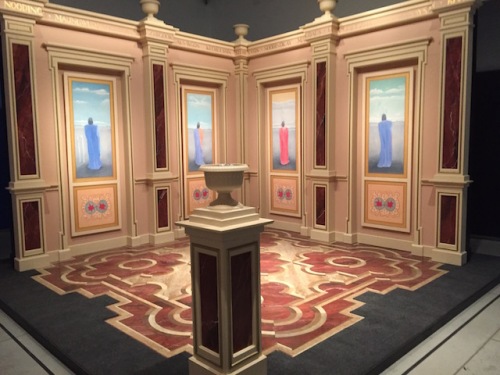 This unique installation at the Art Gallery of Ontario called Paris/Ojibwa is by artist Robert Houle. It is a moving memorial  for Ojibwa dancers who died while entertaining the French court in 1845.  The story starts with American artist George Catlin who traveled extensively in the west painting hundreds of portraits of indigenous people.  He decided to bring his ‘Indian Gallery’ to Europe and display it there. He thought he might attract more viewers for his exhibit if he brought along an indigenous dance troupe organized by George Henry Maungwudaus an Ojibwa interpreter. The troupe performed in London and at the royal court in Paris where King Louis Philipe presented the dancers with medals.  Unfortunately six of the troupe caught small pox in Europe. They died never to return to Canada.

Robert Houle has painted four of these ill-fated dancers, Maungwudaus’ wife Uh wis sig gee zig goo kway and three of her children and shows them on a return journey to Canada, a trip that because of their untimely deaths, they were never able to make themselves.  Above the portraits are the names of the dancers and underneath each portrait is an illustration of the small pox virus that killed them.

Robert Houle paints the portraits on the walls of a reconstructed Parisian salon. There is a bowl of sage on a pedestal at the front of the salon and you hear quiet drum beats as you view the installation.

I was drawn to Paris/Ojibwa because of its creator Robert Houle.  We have an installation of his called Parfleches for the Last Supper on view at the Winnipeg Art Gallery. Many years ago I interviewed Mr. Houle for a Free Press column of mine.  It was interesting to see a more current work of his, especially one that tells such a moving and tragic story.

Art That Makes You Feel Sick

Over the course of my life I have kept all kinds of journals.  Some are in diaries and some are online in blog form. Others are photo books or scrapbooks. Some are collections of letters. I have several long shelves filled with notebooks of every size each one crammed with reflections, lists, cards, concert tickets, my newspaper articles,  programs, souvenirs, poems and books reviews.

Perhaps that’s why I was fascinated by this photograph of artist Meryl McMaster I saw recently at the Art Gallery of Ontario.  Meryl is standing in the snow holding her journals.  One for each year.  She calls her piece Time’s Gravity because she realizes how quickly our time on earth passes and how scant an opportunity we have to preserve the memories of our sojourn here.  She says the journals are a reminder of where she comes from. 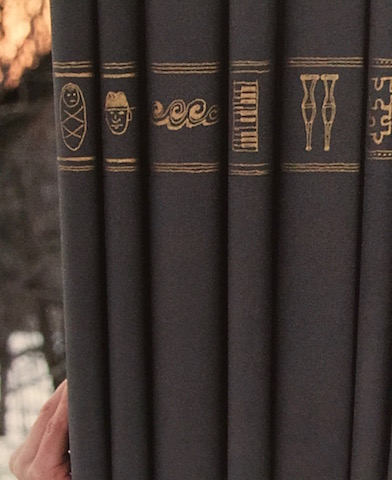 For each annual journal she has chosen a drawing for the spine that represents an important life event in that year.  I stood in front of McMaster’s artwork for a long time trying to decipher each one. Was she representing the birth of a child, meeting an important person, going on an ocean voyage, learning to play the piano, an injury that had her on crutches, and a puzzling year that was hard to figure out?

Meryl got the idea for these symbols from ‘winter count drawings’ used by North American indigenous people to create a pictorial calendar for a community’s oral history. Meryl is a member of the Plains Cree Nation.

Meryl’s symbols had me thinking about what kind of symbols I might select to represent different years of my life.

Canadian basketball player jerseys matched with fancy skirts are featured in a work called One of the Boys created by sculptor Esmaa Mohamoud. They are part of the exhibit Every. Now. Then: Reframing Nationhood at the Art Gallery of Ontario.  I saw the exhibit on my recent visit to the gallery.

The artist says as a child she felt very gender fluid and loved nothing more than playing basketball with her brothers. She remembers being told to take off her Vince Carter Raptors’ jersey and put on a dress. She didn’t want to, so she slipped her basketball jersey over her dress. Esmaa says she hopes all kinds of diversity will be accepted in Canada. She believes our differences shouldn’t scare us but draw us closer together. 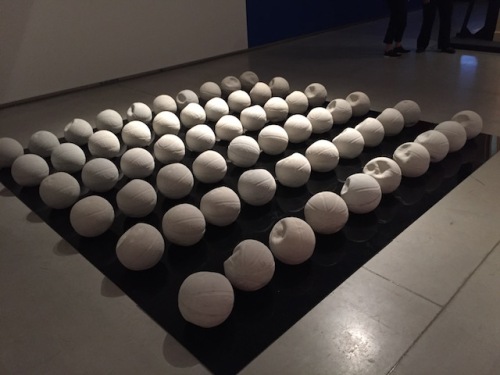 The same artist Esmaa Mohamoud created these thirty concrete basketballs for a work titled Heavy, Heavy Hoop Dreams. They serve as a metaphor for the deflated dreams of black men in North America. Esmaa says while only 30 men each year make it into the NBA; many black young men grow up confident that one of those 30 will be them so they fail to make a back up plan for their life. She says that creates a real weight for black males but also makes them fragile which is why some of the basketballs are dented or not inflated. 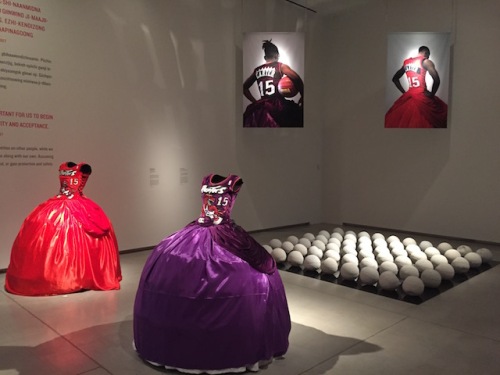 We might not readily associate basketball with art but in her two pieces Esmaa Mohamoud uses items from the sport to create artworks that engage us and make us think.

Tagged as art gallery of ontario, esmaa mohamoud, heavy heavy hoop dreams, One of the boys

You Are Not a Fluke

Britta B’s piece Fluke which I saw at the Art Gallery of Ontario last week is a good example of what an affirming experience it can be to view art. 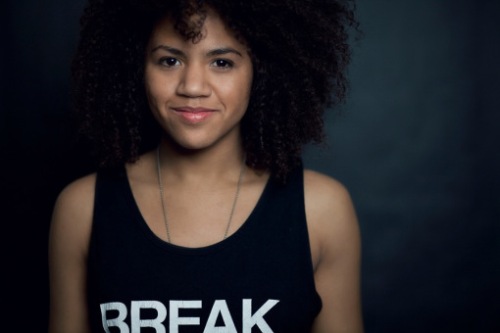 Britta is a spoken word artist and slam poetry champion from the Regent Park neighborhood of Toronto. 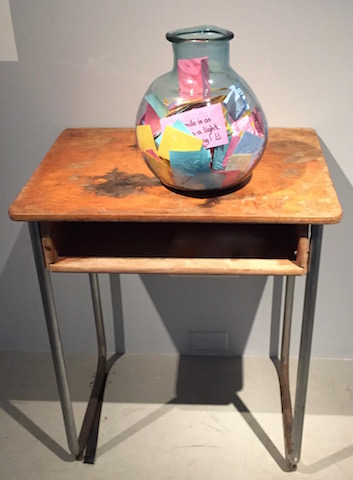 Her work Fluke consists of a large glass jar sitting on an old ink stained school desk.  You are invited to put your hand in the jar and take out one of the folded colorful papers inside.

You read the affirmation printed on the card and then refold it and return it to the jar. While you look at Fluke you can listen to Britta reciting a poem which contains lines like ……

Artist Britta B thinks most people lack affirmation. They do too much negative self talk. She wants everyone to know they deserve to be cared for.  Britta B says we have to keep reminding ourselves of all our good qualities.

Katherena Vermette on the Wall

Tagged as art gallery of ontario, britta b, fluke

A Century is Only a Spoke

Deeds are not accomplished in a few days, or in a few hours, a century is only a spoke in the wheel of everlasting time.  – Louis Riel

This quote in the shape of a wheel is displayed as a touchstone at the heart of a groundbreaking exhibit at the Art Gallery of Ontario called Every.Now.Then: Reframing Nationhood.

Louis Riel who spoke the words that make up the wheel design was a Metis leader who fought to preserve Metis culture and land rights. He was accused of high treason by Canada’s first prime minister Sir John A. MacDonald, convicted and hung.

Entrance to the Every. Now. Then. exhibit -Art Gallery of Ontario

This year Canada celebrates its 150th birthday.  The Art Gallery of Ontario wanted to give voice to groups like the Metis in Canada who might feel they have little to celebrate.  The exhibit Every.Now.Then: Reframing Nationhood gives Metis, First Nations, black, Asian, transgender and other marginalized Canadians a place to tell their story.

Metis men with a Red River Cart, a mode of transportation for the Canadian prairies invented by the Metis. Could this be the kind of wheel Louis Riel was envisioning when he talked about the spokes in the wheel of time?

I spent an enthralling afternoon in Every.Now.Then: Reframing Nationhood and will be doing blog posts about what I saw and learned in the coming weeks. One hopes the exhibit and others like it will help to speed up Riel’s one wheel spoke forward a century pace towards greater inclusion and equality for all Canadians.

Connections in the Globe and Mail

Two articles in last Saturday’s Toronto Globe and Mail struck a chord with me.

The first was about a new ballet that premieres today at the Art Gallery of Ontario called The Dreamers Ever Leave You.  The ballet choreographed by Robert Binet is inspired by the current Lawren Harris exhibit at the AGO called The Idea of  North orginally curated by American actor and comedian Steve Martin. Binet’s dancers will move between three different stages at the AGO and the audience will also have a chance to see the Harris paintings that inspired the ballet.

We have quite a number of Lawren Harris paintings on display at the Winnipeg Art Gallery right now in our Group of Seven exhibit.  As I give kids tours of the gallery could I get them to come up with a dance to go along with one of our Harris paintings?

Another Saturday Globe and Mail article celebrated Sonja Bata who founded the Bata Shoe Museum in Toronto.  She and her husband Thomas were responsible for the success of the Bata Shoe empire which once owned some 1700 stores world wide. Sonja just celebrated her 90th birthday and her museum marked its 20th anniversary last year.

I was drawn to the article about Sonja and her museum because Dave and I once had the pleasure of visiting the Bata Shoe Museum in Toronto.  It was so surprisingly interesting! We discovered that shoes can be works of art too.

Two Very Different Members of the Group of Seven