Nice Guy- Not A Great Writer

Watching the game show Jeopardy is an almost daily ritual in our household. So I was looking forward to reading host Alex Trebek’s autobiography The Answer is…………….. 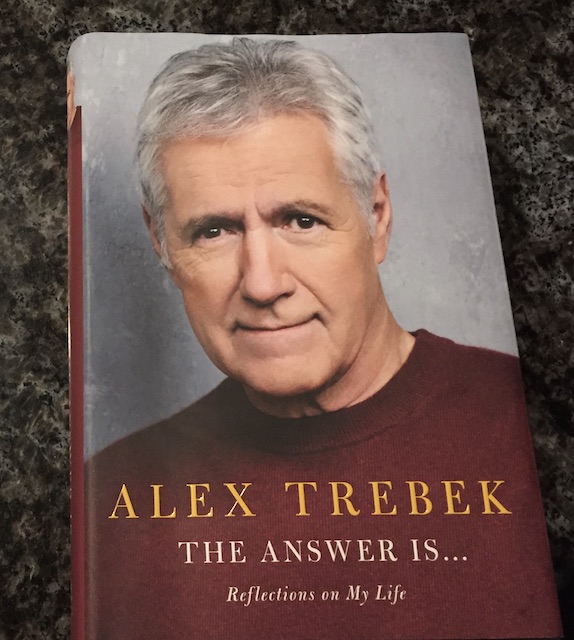 The book is a collection of short vignettes. They provide glimpses into Alex’s childhood, career, and family life. Alex is certainly not a ‘woe is me’ kind of person. His childhood was rough. His Dad worked long hours at restaurants and drank heavily. His Mom left the family. His parents got divorced, but Alex is not bitter. He speaks highly of both of his parents and the positive relationships he had with them.

Alex is a really nice guy but he is not a great writer.  What is kind of refreshing is he knows writing isn’t his forte and it’s one reason he didn’t really want to write his autobiography.  He did it as a kind of thank you letter to his fans who have shown him such tremendous support since he announced his pancreatic cancer diagnosis just over a year ago.

Alex Trebek with his family after receiving the Order of Canada. -photo from The Answer is…..published by Simon and Schuster

Alex is not your stereotypical Hollywood star if there is such a thing. He and his wife Elaine don’t hobnob with other celebrities or hit the club scene. They stay at home watching movies in the evening and Alex likes to tinker around the house doing repairs and renovations. The couple has two children Matthew a restauranteur and Emily a real estate agent.  During COVID the two have come home to stay with their parents because it gives them an opportunity to spend quality time with their Dad before his death.  The family already has a palliative care plan in place.

The book informs us that Alex has done lots of charity work and he and his wife are generous donors to many different causes. One of his more interesting crusades has been to save the musk ox from extinction. He is on very amicable terms with his first wife and stepdaughter who regularly spend Christmas with his current family.  When it comes to politics Alex thinks most of America’s problems could be solved if people, especially the wealthy and powerful, had a conscience, showed compassion, and were willing to compromise.

If you are a Jeopardy fan like I am, you will have been excited this week when the program returned after several months of reruns with a new format that allows for physical distancing.  Alex is back too and wants to keep working as long as he can. In the book, he expresses surprise that no matter how terrible he is feeling somehow he always manages to still do the show.

There is a ton of white space in this book.  There are plenty of pages with single photos or just a quarter to a half a page of text.   You can pick up the book when you have time and read a section in a couple of minutes. It contains no earth-shattering information.  It won’t win a Pulitzer Prize.  But if you are a Jeopardy fan The Answer Is………. will give you an inside look at a really nice guy who has made the best of his life and is grateful for his professional and more importantly his personal good fortune.

Other posts about autobiographies…………

Born a Crime by Trevor Noah

Her Worship by Susan Thompson