Recognition For My Favourite Winnipeg Band

Our son Bucky is a member of the  Winnipeg band Royal Canoe . They had two honours come their way this past week.  Their album Waver has been nominated in the recording of the year category for the Western Canadian music awards. The producer of the album John Paul Peters has been nominated for producer of the year. The awards ceremony and an accompanying music conference were to have been held in Winnipeg September 25- October 4. This year the awards ceremony will be virtual.  Royal Canoe won a previous Western Canadian music award in 2014 for their album Today We’re Believers.

The band was also nominated for a Juno award in 2014.

In honour of Manitoba’s 150th birthday, the Winnipeg Free Press cover story yesterday was called Sounds Like Home. It listed and described the 150 most important songs by Manitoba artists. Royal Canoe’s song Bathtubs was included in the list. You can watch the very cool video of that song here. 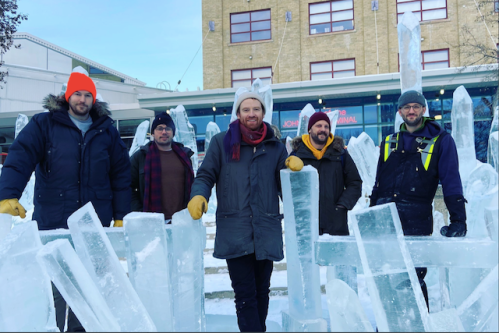 In a year when touring and performing is on indefinite hold due to the pandemic, Royal Canoe has managed to garner some well deserved recognition.  In January they performed a show entirely on ice instruments to huge crowds at The Forks in Winnipeg and in May a documentary film about that performance called Glacial had its debut.