What kinds of spiritual practices are helpful for you? Do you meditate, walk labyrinths, smudge, fast, journal or chant?

Dancing with Naxi women in Shangra La in Yunnan province

Traveling through the Chinese province of Yunnan years ago we learned about the unique ways people there connect with the divine. Religiously the people of Yunnan practice a mix of Taoism, Confucianism, and Tibetan Buddhism and they introduced us to some of their spiritual practices.

In the village of Baisha, Taoist Dr. Ho offered us some of his herbal tea. We were assured that slowly sipping it would cure us of any spiritual, emotional or physical ills we might have. 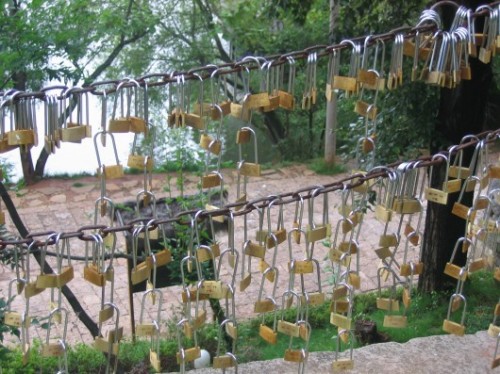 Hundreds of locks adorned the railings around a Buddhist temple beside Black Dragon Pond in Lijiang. Each had a person’s name, a date and a prayer engraved on it.  For a small fee, a priest would etch your name and prayer on a golden lock. You fastened your lock to the fence taking the key with you. Eventually, your prayer would be answered.

A lake near Jade Dragon Snow Mountain was a lovely turquoise color because of the various iron deposits it contained. “Wash your hands in it” our guide urged me, “and you will live happily for a long, long time.”

I had never seen a stupa until I visited the city of Zhongdiang. These are huge mounds of stones each with a Buddhist Scripture to read on one side and a personal prayer written on the other. We were offered stones to write prayers and we placed them on the stupa as well.

At a Tibetan Buddhist temple, the monks gave us yak bead bracelets to finger as we prayed and also encouraged us to inhale the incense they make from plants they grow themselves.

Like most people in the world, the citizens of China’s Yunnan province have a firm belief that a power greater than themselves can influence the direction of their lives. We were privileged to have a chance to learn about some of the ways they present their desires and concerns to the divine.