I went to the Humans Rights Museum to see the new Nelson Mandela exhibit.  There are images there you won’t easily forget.

This wall of signs illustrated how whites and blacks were segregated in everyday life in South Africa.

This public notice about relationships between whites and non-whites reminded me of Trevor Noah’s autobiography Born a Crime.  Noah grew up in South Africa. He and his black mother had to walk on the opposite side of the street from his white father when their family was going somewhere so no would suspect his parents had a relationship with one another. 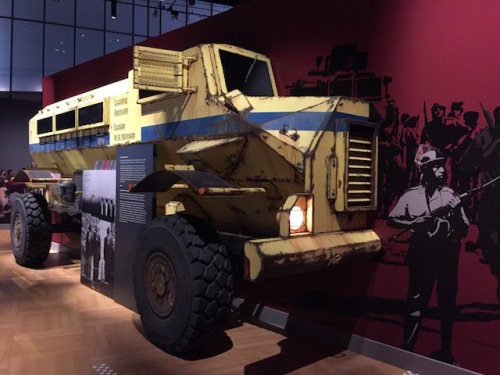 This armoured truck was used by the South African government in the 1980s to stop apartheid protesters.

These are the coffins for some of the victims of the Sharpville Massacre. In March of 1960 thousands of people protesting apartheid practices went to a police station in Sharpville, South Africa. The police fired into the crowd killing 69 people and injuring nearly 300 more including some thirty children. Today March 21 is a public holiday in South Africa to commemorate this massacre.

I felt so proud of Canada as I watched this video.  Stephen Lewis, Canada’s ambassador to the United Nations in 1988 describes a ground breaking speech Brian Mulroney, Canada’s prime minister made to the United Nations that year. Mulroney declared that his country would impose tough economic sanctions on South Africa unless they changed their apartheid policy.  The United Nations assembly rose to its feet to applaud Mulroney at the end of his speech.

Of course the exhibit tells visitors all about the important role Nelson Mandela played in ending apartheid in South Africa and includes his famous 1962 quote……”I have cherished the ideal of a democratic and free society in which all persons live together in harmony and with equal opportunities. It is an ideal which I hope to live for and to achieve. But if needs be, it is an ideal for which I am prepared to die.”