Should Women With Young Children Be Politicians?

“Could Andrew Scheer have been elected the leader of a national party if he were a woman with five children including a newborn? “

In an essay in Macleans magazine Rona Ambrose, the previous interim leader of the Conservative party writes about ways to encourage more women to be involved in politics. She says we have to be willing to accept that women regardless of their physical attributes and family compositions are capable of holding government office.

Her comment about Andrew Scheer, the father of five young children and…….. the Conservative party leader who succeeded her, suggests we don’t always think of male and female politicians in the same way. There’s an assumption that mothers of large families with young children might not be the best political candidates, but fathers of similar families are.  Ambrose says this reflects not only the obvious practical challenges in such a situation but also ” the real, judgmental, and sexist perceptions that women face in politics. ”

Women with young children should represent us politically.  They are in tune with the needs of young Canadian families and their voice is of great importance.  What things could we do to encourage and support them so they would not face stereotypical discrimination and so many practical impediments to political service? Should affordable child care with extended hours be offered on Parliament Hill? Should members of Parliament have more flexible working times, additional help with travel expenses so families can be together more often, and assistance with finding schools and housing in Ottawa? Should there be a greater openess to allowing children to be present in their parents’ work place on Parliament Hill?  Implementation of some of these changes has already begun  as this CTV News article suggests.

These changes will not only benefit women politicians but also support fathers like Andrew Scheer and my own member of Parliament Robert Falcon Ouellette who has five children, so they can share parenting responsibilities  more equally with their partners.

Looking Back Instead of Forward

Could I Join the Conservative Party?

I Sat in the Speakers Chair

A Grandmother for Jesus

Jesus’ grandmother Anne was one of the featured saints in a sermon in our church last Sunday.  The apocryphal Gospel of James has Anne’s story.  She was Mary’s mother and Jesus’ grandmother.  Artistic depictions of Anne show her playing an important role in her grandson’s life.

Virgin and Child with St. Anne by Lucas Cranach the Elder 1520

This is St. Anne’s Church in Jerusalem.  I visited it on a school trip with my Hong Kong students.

The church is located right beside the pool of Bethesda where Jesus healed a man who had been sick for 38 years. This is fitting because Anne is the saint of healing. Interestingly Anne’s church in Jerusalem is at the same spot where there used to be a shrine to the Greek god of healing Ascelepius.

Statue of Anne and her daughter Mary in the St. Anne church in Jerusalem. Like the Old Testament character Hannah, Anne thought she wouldn’t be able to have children and was an older woman when Mary was born.

In Quebec City I visited the Basilica of Sainte-Anne-de-Beaupré.

At the back of the church are all these cabinets filled with crutches and canes people have left behind. They didn’t need them anymore after visiting St. Annes’  church because St. Anne healed them. She is the saint of healing.

The Virgin and Child with St. Anne by Leonardo da Vinci

I never knew about Ste. Anne till I visited the two churches built in her honor. It is interesting to realize there are religious writings that gives Jesus a grandmother who played an important role in his life just like many grandmothers do for all of us.

I was having lunch in a Steinbach restaurant last week when a woman approached me. I recognized her right away as the mother of one of my students from many years ago.  Her son had made such an impression on me that I had taped a photo of him in my journal during the year he was my grade four student. The reason I remember him so well is because of something that happened while I was reading aloud Anne of Green Gables to the class.  We had just finished the chapter where Anne tells her adopted father Matthew  she believes the two of them are kindred spirits. The little guy pictured below came up, tapped me on the arm and whispered “You know Mrs. Driedger I think you and I are kindred spirits too.”  It was the highest compliment I could have received and I’ve never forgotten that moment.

The boy’s mother who came over to me in the restaurant last week told me about her son’s stable career, his happy marriage and the fact that he was now the proud father of twins.  She even showed me a photo of his two tiny newborns. I was glad to hear my kindred spirit was doing so well.

Kids and the Flood of the Century

The Children are Watching and Listening and Wondering

In 1986 when the curators of the Picasso Museum in Antibes France decided to paint a memorial artwork to honour Picasso, a Canadian woman was chosen as one of four artists from around the world to help create the memorial. Her name was Daphne Odjig.

Daphne died last year at age 97 after a remarkable career.  She was dubbed  Picasso’s Grandmother by fellow indigenous artist Norval Morrisseau. Daphne discovered the paintings of Picasso in the 1950s and carefully studied and analyzed his work. Picasso upon seeing Daphne’s work at an exhibition called her  ‘a remarkable artist’.

Tribute to Picasso by Daphne Odjig

Daphne is sometimes referred to as the Grandmother of Indigenous Art.    Joseph Sanchez says Daphne was indeed a ‘grandmother’ figure to many indigenous artists. “Her energy guided us,” he says.  She also gave indigenous artists financial support by buying their paintings for her gallery.

I always end my Picasso tours at the Winnipeg Art Gallery by going to look at Daphne’s painting Friends Rejoicing in our collection and tell my tour participants about Canada’s Grandmother Picasso.

The Song My Paddle Sings

A Different View of the World

Blended Families Are Nothing New

Although the term blended family may be relatively new the idea certainly isn’t.  While writing a history of my husband’s parents I learned about a blended family that was part of his father’s background. 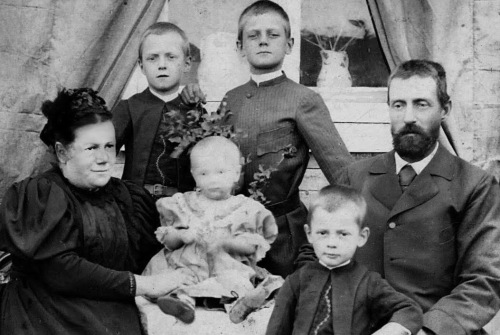 This is my husband’s great grandmother Katharina Warkentin Driedger.  Her first marriage was to Nicolai Driedger shown at the far right.  Together they raised four children, Nicolai, Jacob, Maria and my husband’s grandfather Abram the little boy on the far left.  This photo was taken in 1898 when Abram was eight years old. In 1906 Katharina’s husband Nicolai Driedger died and she was left with her four children. 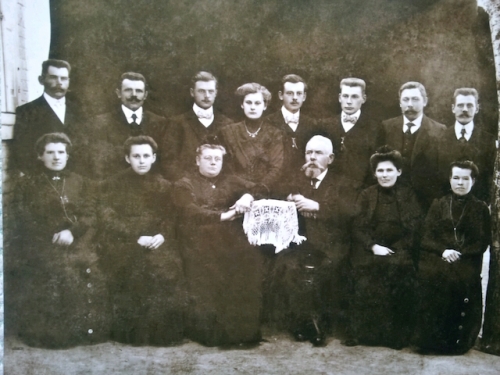 That’s when she married Johann Cornies a widower with four children of his own.  This picture of their blended family was taken in 1912. It includes the eight children they brought to their marriage plus four of those children’s spouses. My husband’s grandfather is the third man from the left in the back row.

Even though the phrase blended family was only coined in the 1970’s blended families were around long before that.

A Tipped Caboose and a Black Eye

A mother is furious with her son. He is dating a Caucasian American woman instead of one of the many eligible Pakistani girls she’s picked out for him. He’s confessed to his family that his Muslim faith feels meaningless. He’s announced that instead of becoming the lawyer his parents have always dreamed he would be, he’s off to New York City to pursue a career as a stand up comedian. The mother is so mad she stops speaking to her son and says he is no longer part of their family.
However…………. as he is packing his van to head off to New York his parents pull up in their car. His father gets out and walks over to hand his son a container of food saying something like ….  “Here is food to eat as you travel.  Your mother has made your favorite dish with extra potatoes just the way you like it.” The father goes on. “Your mother will not let me hug you but she would like you to text her when you get to New York so she knows you’ve arrived safely.” 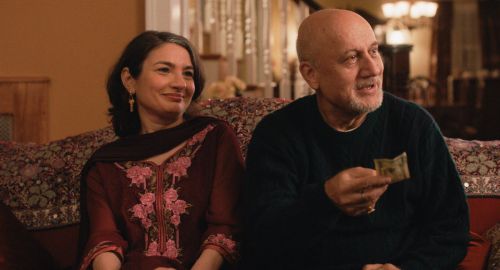 The Pakistani parents are played by Anupam Kher and Zenobia Shroff .

I laughed out loud. Despite her grand show of disowning her son and being furious with him she still loves him and is concerned for his safety and well being. 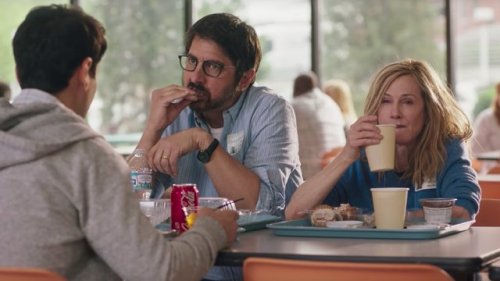 The American parents are played by Holly Hunter and Ray Ramano.

The highlight of the movie The Big Sick for me was definitely watching the parents of the films’ two main characters, a Pakistani comedian and a female psychology student.  The woman’s parents are quirky, straightforward and in crisis mode, but they obviously love their daughter desperately just as the young man’s parents love their son. This is a movie worth watching just to see four great actors do an excellent job of portraying parents in such a realistic and heart warming way.

He Watches, He Listens, He Thinks, He Writes

Tagged as parents, the big sick

Today is my Mom’s birthday.

She was my mother but also……… 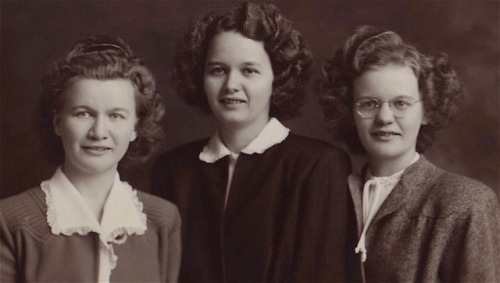 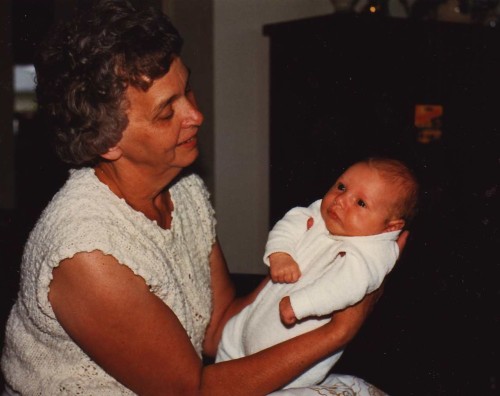 and a friend
She was also an aunt, a musician, a church member, a homemaker, a community volunteer, a mother-in-law, a sister-in-law, and great-grandmother.
She is missed in all these roles and many others.

She Would Have Been 90

Let Me Call You Sweetheart