More Visible But Not Equal

I saw the movie The Women’s Balcony at the Toronto International Film Festival Theatre this week. It reminded me of just how far we’ve come in giving women an equal place with men in religious institutions and just how far we still have to go.

The Women’s Balcony is a Hebrew film about a synagogue in Jerusalem being influenced by their new young conservative rabbi who wants women to worship separately from men in a closed room at the side of the temple. The women want to worship in an open balcony right in the same area as the men worship. Eventually the women leave their husbands because they are siding with the new rabbi.  The women raise the money for a balcony and manage to get it built. They return to their husbands who facilitate the removal of the conservative rabbi and the return of their older more flexible rabbi. Progress has been made although the fact that official power in the synagogue still rests with a man, or that women still sit separately from their husbands in a balcony isn’t addressed in the film. Reading about the film later I learned it reflects the ongoing divide in Judaism between orthodox and liberal factions and their differing views of women’s roles in the church. Women are becoming more visible but are still far from equal. 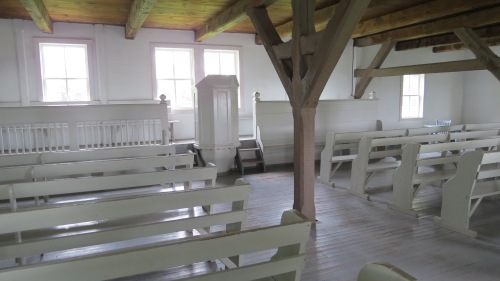 Church at the Mennonite Village Museum with separate sides for men and women.

I can remember attending my grandparents’ church where men and women sat on different sides of the sanctuary.  I grew up in a church where there were no women pastors or leaders.  Thankfully those times have changed in some Christian churches but in others women still have no voice and are not represented in leadership at all. This lack of equality for women in the Southern Baptist Church is what led former American President Jimmy Carter to publicly announce he was leaving the denomination after his family had belonged to it for generations. A council created by my Mennonite denomination in 2016 to oversee a time of transition in our national church body contained eight men and one woman.  Women were more visible than they would have been in the past but they still were far from equal.

In my lifetime women have gained greater representation and influence in religious spheres but the journey is far from complete.

Questions After Watching the Film Silence

The Children are Watching and Listening and Wondering

A Woman I Wish I Knew More About