On Monday Angela Roulette taught the Winnipeg Art Gallery tour guides about story sticks.  Angela began by using her own stick to tell us her life story.  We learned her mother was from the Sandy Bay First Nations community and her father was from the Ebb and Flow First Nations community.  We discovered her former husband liked to sew and that her son-in-law was from Jamaica.  We heard interesting stories about her grandchildren and the diverse group of people she came to know while participating in the Standing Rock protest. In all her stories Angela emphasized the four things we can do to change the world …….. be kind, be honest, be strong and share what you have. 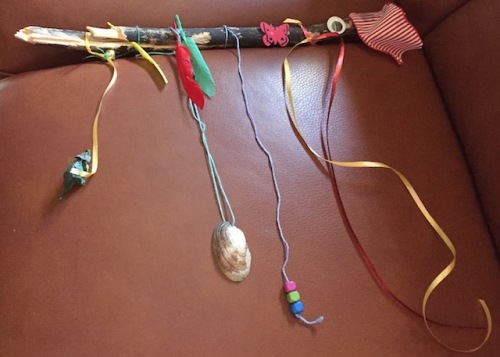 After Angela had told us about her story stick it was our turn to make our own story sticks.  My story stick had many items including three beads to represent my siblings, feathers for my sons and a shell for our family’s lakeside cottage.

Story sticks are a great way to reflect on the important and influential people and experiences in your own life and to share your story with others.

Who Do Family Stories Belong To?

The Remarkable Story of the Runaway Bay Resource Centre