Sunset Walk in America The Beautiful

Dave and Hans ready for the walk.

At the invitation of our friend Hans, who lives not far from us here in the San Tan Valley we went on a photography walk to see the Arizona sunset.  The walk was in Lost Dutchman State Park an Arizona park we had never visited before. 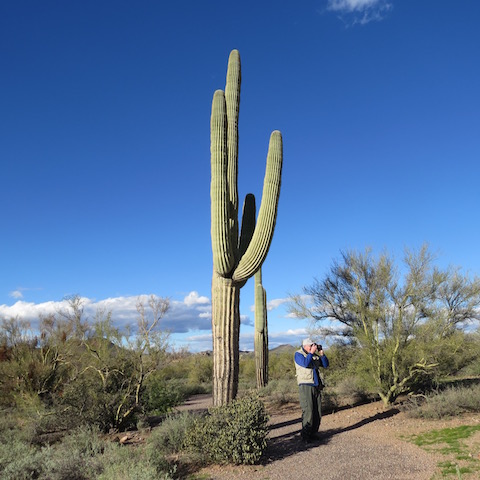 Hans gets ready to take a photo beside a saguaro cactus that we learned weighs 10 tons. We hoped it wouldn’t fall on him!

Hans who belongs to a photography club carries all kinds of photography equipment along with him on these adventures. We even had to turn the car around just after setting off for the park to go back for stuff he had forgotten.  I’m sure the photos he took on our walk were stunning and I am looking forward to seeing them.

We were on the walk with forty-five other people. When we introduced ourselves we found out there was one other couple from Canada. They live near Ottawa but otherwise our group had visitors from more than a dozen different American states.

Barb, a park volunteer was our guide for the walk. She has a comb pick in her hand. She told us this is an essential tool for a desert walk because it helps to get unwanted cacti burrs off your clothing without hurting your hands.

Barb stopped to point out a whole bunch of different plants and trees on the hike.  These are hedgehog cacti.

Early in our walk we got our first view of the snow-capped Four Peaks way off in the distance. They are part of the Mazatzal Mountains.  Only one of the four peaks has an official name-Brown’s Peak so I wondered what we could call the others. 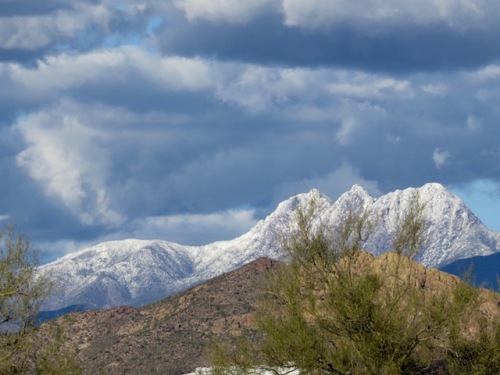 Perhaps one should be named the Amethyst Peak since our guide Barb told us that between the third and fourth peak is the only commercial amethyst mine in the United States. Helicopters take supplies in and minerals out. The miners hike nine miles to work and usually spend about a week at a time at the mine site which has no running water or electricity.  Hand tools are used to extract the amethyst.

Because we were on the hike with Hans we actually got a picture of the two of us together.

During our two-hour walk, it was interesting to watch the sun change Flat Iron, the rock formation behind us. Formed by volcanic activity some 25 million years ago it is a pillared mesa. 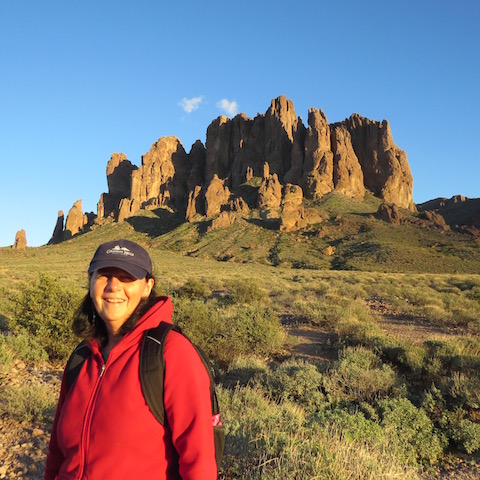 Here Barb is showing us some mistletoe growing on a tree.  Desert mistletoe will eventually kill a tree but it can take 10 to 15 years to do so. The parasite is spread from one tree to another by birds who wipe their bills on branches or deposit droppings on the tree after eating the mistletoe fruit.  Mistletoe is just a fact of life in the Sonoran Desert and there isn’t much you can do about it.

Don’t Dave and Hans look fascinated with all the facts they are learning about the mistletoe?

At this point in the evening, Flat Iron reminded me of the red rocks you see in the Sedona area. 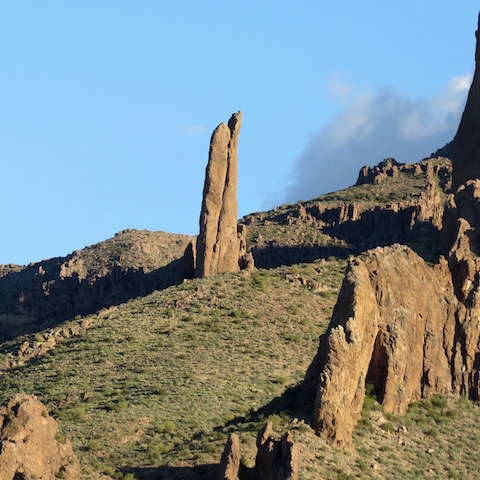 This rock formation has been dubbed The Praying Hand. It is a favourite ascent for rock climbers. 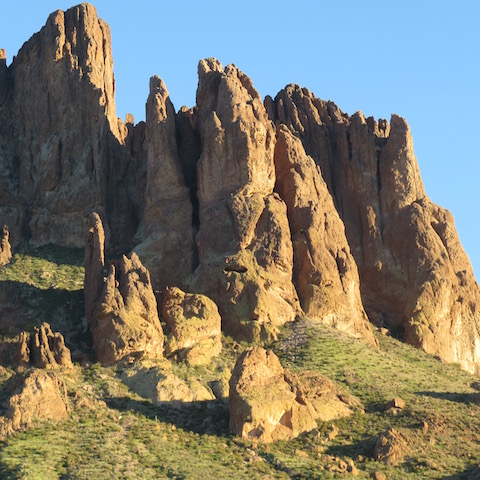 I thought the formation on the bottom left here looked like a hand too and in the one in the centre, I could see a face with eyes, nose and mouth. 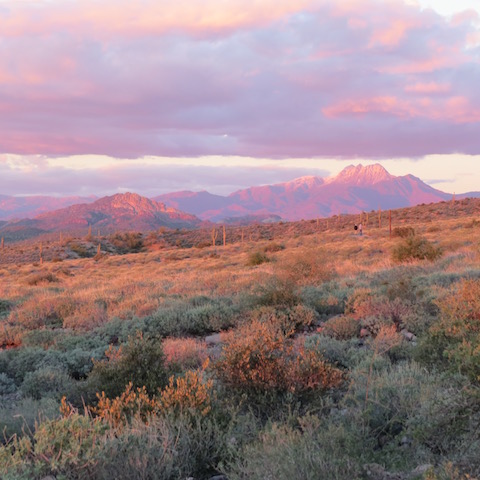 Later in the evening, the light on the distant mountains reminded me of that line from God Bless America about the purple mountains majesty. The song was written using the words from a poem by Katherine Lee Bates. She and her life partner Katharine Coman were fellow Wellesley professors who traveled often to the American West and were tireless advocates for America’s poor.

The rock formation in the background of this photo figures prominently in a First Nations legend that tells the story of a group of people who escaped a flood by climbing to its peak. The white line on the rock shows how high the water came.  See the hoodos to the left? They are tall thin spires of rock also called fairy chimneys or earth pyramids. There is also a tragic modern story associated with this rock formation. On Thanksgiving, in 2011 a plane crashed into it killing six people including a father and his three children.

As we neared the end of our walk the sun truly set and we got some colourful views. 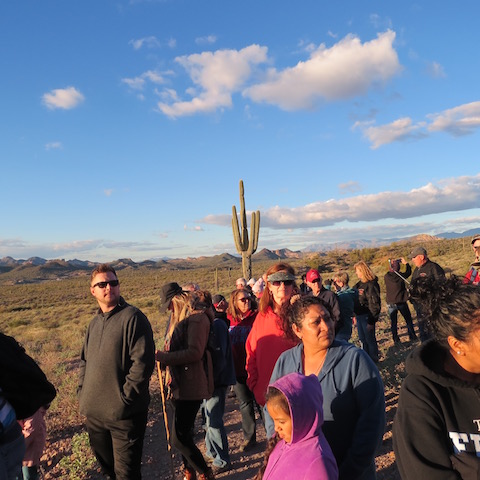 The news is just full of all this rhetoric about a divided America and so it was kind of reassuring and lovely to hike through the sunset with this huge group of people of varying ages, from varying cultural backgrounds and various geographical regions in the United States who were all so friendly and enjoying nature’s spectacular show together. 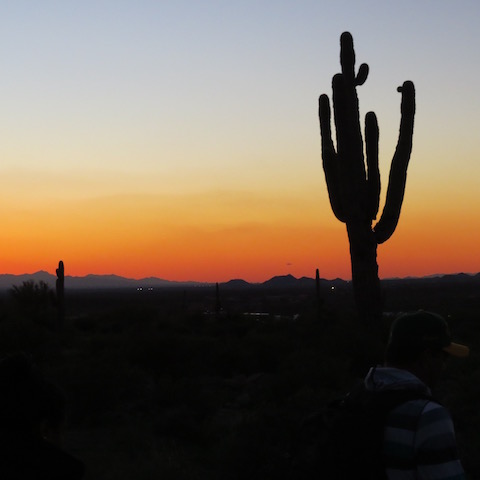 Six Toed Cats, A Birthing Chair and His Last Penny