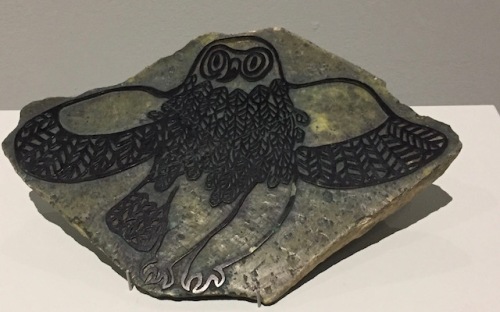 For me the most fascinating room in the Our Land exhibit currently on display at the Winnipeg Art Gallery is the one featuring a series of stone cut prints. There are many different ways Inuit artists make prints but stone cuts are unique. In the Our Land exhibit we are fortunate enough to be able to see not only the prints, but also the stone cuts used to make them.  The Owl is interesting because the same artist, Lukta Qiatsuk drew the image and created the stone cut to be used for the print. Often however the artist who creates the image for the print is different from the carver who recreates the image in the stone.

Weir at Shartoweektok by Pitseolak Ashoona- 1975

The image for this print was drawn by one artist…

But the stone block was carved by two different artists. Once they had carved the image in stone the printmakers applied colored ink to it using a tool called a brayer and then laid a sheet of paper on the inked block and rubbed the back of the paper using a flat tool to apply even pressure. After the ink had soaked into the paper, the paper was peeled carefully from the stone block to reveal the printed impression. The image on the print always appears in reverse of the original drawing.

The art of stone cut printmaking is new to Inuit artists. It was introduced by James Houston an artist who went to the Arctic to work after World War II and in 1958 traveled to Japan to study woodcut printmaking with Japanese masters of the art. Houston shared what he had learned with Inuit artists and they adapted the woodcut technique for stone. 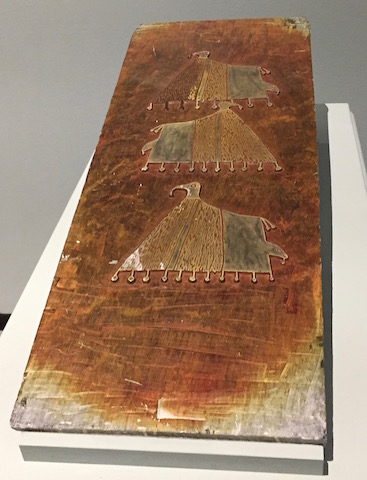 Normally when a printmaker has made about 50 prints the stone carving that created it is ground flat. So we are fortunate the ones in the exhibit have been preserved for us to see. The exhibit Our Land includes a film showing how the prints are made and a display case with some of the tools used in the printmaking process.

The Globalization of Art from Japan to Cape Dorset

Transferring the Real to the Unreal