Did you know that traditional Inuit parkas were constructed in a way that corresponded to the parts of a caribou?  The hoods and hats were made from the skin on a caribou’s head.  The hide from the torso was used for sewing pants and the jacket. Fur from the caribou’s legs became mittens, socks and boots.  Caribou outfits have two layers. On the inner layer the fur faces in and on the outer layer it faces out.

During the exhibit Our Land at the Winnipeg Art Gallery I was introduced to many fashion items that illustrated the artistic talents of their designers and creators. 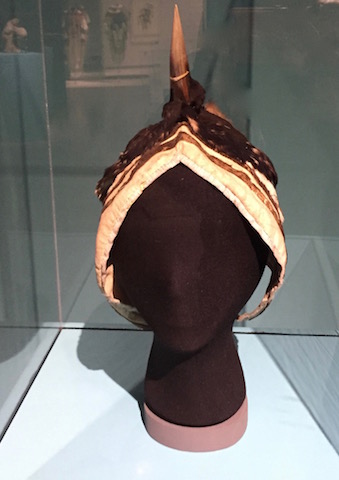 Check out this fashionable head-gear made from caribou and ermine fur and the skin, feathers and beak of a loon.  It was used by loon dancers who danced as fast as they could to set the piece of ermine fur attached to the beak into a spin.  The loon is a bird of vision and speed and it is said that those who wear this loon hat are granted those gifts as well. There is a well-known Inuit legend about a blind boy named Lumak who has his sight restored after swimming with a loon. 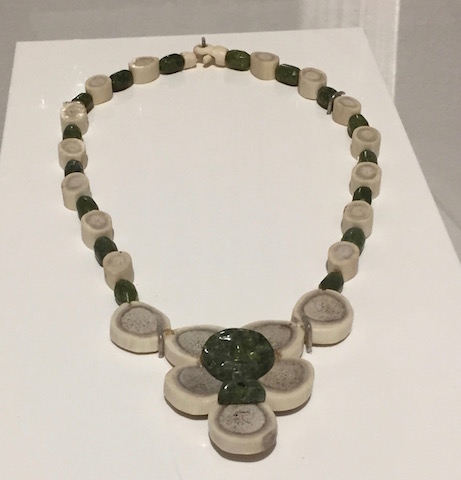 Of course no fashion ensemble is complete without jewelry. This fabulous piece is made of caribou antler, stone and sinew by an artist named Papiarak Tuqiqi.

Can you even imagine how skilled as seamstress you would have to be to create one of these beautiful amautiks? These are special parkas worn by Inuit women with young children because they have a pouch or amaut on the back for carrying babies. The pouch can be slung to the front allowing the mother to nurse a child while the infant stays cozy and warm.  One of the amautiks is made of caribou the other of cotton decorated with beads. 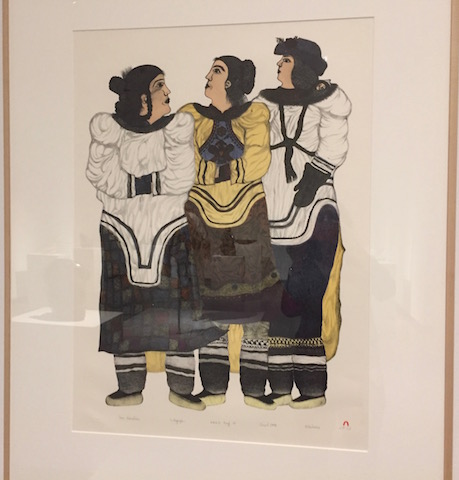 One of my favorite pieces in the Our Land exhibit had to be this lithograph by Pitaloosie Saila called Four Generations which shows a family of Inuit women in their parkas.  Can you see the baby girl tucked into the woman’s hood on the far right? She’s the fourth generation.

This parka has quite the story associated with it. It belonged to an Inuit shaman named Qingalisaq and was sewn to tell the story of his encounter with a dangerous mountain spirit called an Ijirat. The spirit approached him while Qingalisaq was hunting caribou and tried to push him down. Because Qingalisaq maintained his calm composure the spirit realized he meant him no harm and left.  You can see the imprint of the Ijirat’s hands on the coat.

Although the Inuit women of long ago who had their bodies decorated with tattoos thought them beautiful and a kind of fashion statement they served other purposes as well, signifying the advent of childbearing years and a protection from evil spirits. Germaine Arnaktauyok the artist who created this lithograph called Tattoo Lady discovered that tattooing was done with soot and a caribou needle and tattoos have been found on masks in the Cape Dorset area dating back to 1000 BC.

I found an interesting article that talks about young Inuit women who are trying to revive the art of tattooing which was banned by missionaries when they arrived in the Arctic.

Fashion is definitely as Inuit an art form as soapstone carvings.

Inuit Art at the Zoo