Connections in the Globe and Mail

Two articles in last Saturday’s Toronto Globe and Mail struck a chord with me.

The first was about a new ballet that premieres today at the Art Gallery of Ontario called The Dreamers Ever Leave You.  The ballet choreographed by Robert Binet is inspired by the current Lawren Harris exhibit at the AGO called The Idea of  North orginally curated by American actor and comedian Steve Martin. Binet’s dancers will move between three different stages at the AGO and the audience will also have a chance to see the Harris paintings that inspired the ballet.

We have quite a number of Lawren Harris paintings on display at the Winnipeg Art Gallery right now in our Group of Seven exhibit.  As I give kids tours of the gallery could I get them to come up with a dance to go along with one of our Harris paintings?

Another Saturday Globe and Mail article celebrated Sonja Bata who founded the Bata Shoe Museum in Toronto.  She and her husband Thomas were responsible for the success of the Bata Shoe empire which once owned some 1700 stores world wide. Sonja just celebrated her 90th birthday and her museum marked its 20th anniversary last year. 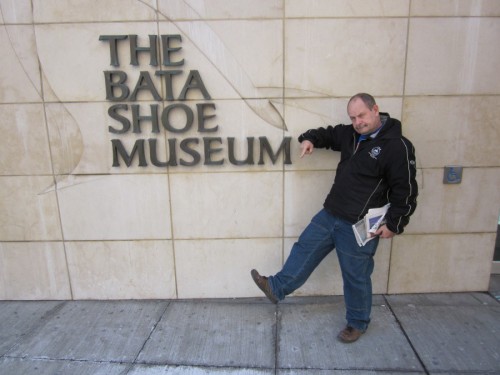 I was drawn to the article about Sonja and her museum because Dave and I once had the pleasure of visiting the Bata Shoe Museum in Toronto.  It was so surprisingly interesting! We discovered that shoes can be works of art too.

Two Very Different Members of the Group of Seven