Musical Walk in A Bamboo Forest

There was a deafening crack and a mighty crash that made us halt our conversation mid-sentence.

We went for a walk in a bamboo forest near Uvita, Costa Rica. The neatest thing about it was the sound, the way the wind moved through the swaying bamboo making it sing. It was lovely. The intensity of the wind gusts changed the sound. It was a kind of bamboo symphony.

Dave and I were talking about some bamboo memories. His very first pole vault pole when he was a track and field athlete in high school was bamboo. Later he saved money to buy a fiberglass one.

I was reminded of the bamboo scaffolding they use in Hong Kong when they are constructing buildings.

As we were talking suddenly one of the stalks of bamboo crashed to the ground and it was so loud we both jumped!

In order to restore tropical forest that’s been clear cut the Costa Rican government has been planting a South American variety of bamboo since the mid 1990s. Bamboo is the fastest growing land plant and it can be a great source of cheap building material but also stabilizes clear- cut slopes helping to prevent soil erosion. During Hurricane Mitch parts of Costa Rica planted with bamboo just a few years earlier suffered no mudslides while other areas of Central America did. 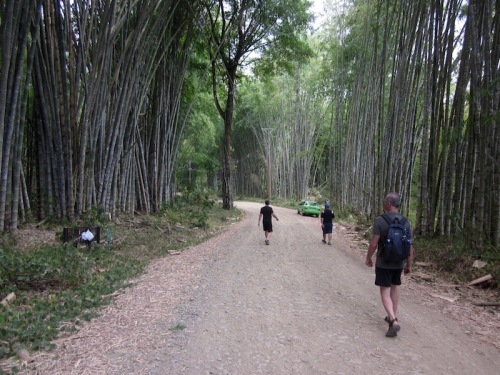 A regular tree can take 50 years to be ready for cutting, bamboo can be harvested 35 times in that period and re-grow, providing habitat for wildlife and soil stabilization. Bamboo also absorbs more carbon dioxide and releases 35% more oxygen into the atmosphere than an equivalent stand of hardwood trees.

The bamboo forests of Costa Rica not only sound  beautiful they play an important environmental role in the country too.

Edge of the Trees

Getting Up Close and Personal With A Famous Inventor

One response to “Musical Walk in A Bamboo Forest”