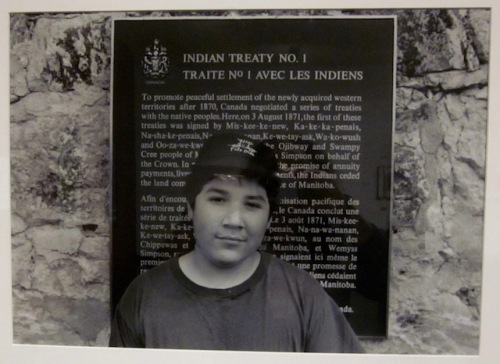 For the last thirty years photographer Jeffrey Thomas has been taking photos of his son Bear in urban settings alongside representations of indigenous peoples that cause the viewer to consider the impact of colonization and systemic racism.  The exhibit We Are On Treaty Land currently at the Winnipeg Art Gallery includes two photos from the Bear series.  Bear was twelve years old when his Dad photographed him in front of a Treaty One plaque at Lower Fort Garry.  Jeffrey Thomas says the often playful photos he does of his son are a way of processing what it means to grow up as an urban Iroquois.  How is that different from growing up on a reserve?

Curator Jaimie Isaac says in these photos Thomas deliberately portrays his son in a way that resembles the mug shots which might be taken of prisoners- with both a front and back view.  This alludes to the high rate of incarceration of First Nation young men.

Bear who continues to be the subject of his father’s photographs is 37 years old now. Canadians may know him best as DJ Bear Witness a member of the Juno award-winning music group A Tribe Called Red.