I made my film debut in Hong Kong when my husband Dave asked me to appear with him in a reenactment of Shakespeare’s Sonnet #138. Dave was giving his high school English class an assignment to write a modern-day version of a Shakespearean sonnet and he wanted to perform one himself as a sample for the students.

I was a little hesitant to give it a try but I think I didn’t do too badly in my first screen role.  See for yourself by clicking on the photo below. There are some breaks in the film but do watch till the end where Dave does a great recitation of the sonnet.

So Proud of Them- Visiting My Students in New York

She’s Done It Again- Proud of my Former Student

Those Who Went to War and Those Who Didn’t

They had very different beliefs about what it means to be a peacemaker and serve your country. Last weekend we drove out to Winkler and my cousin Al took us to see a history park in the community’s downtown.

Since Canada had just celebrated Remembrance Day the cenotaph in the park which honors Winkler’s war dead was covered in wreaths.  The memorial contained only a handful of names. Perhaps this is because Winkler was primarily a Mennonite town during World War I and II,  so not many citizens volunteered or were conscripted into the military. A key distinguishing tenet of the Mennonite faith is pacifism. Those who did not participate in military service because of their religious beliefs are also recognized in the park in a memorial directly across from the cenotaph.

This wall contains 3021 bricks because that is the number of people who were religious conscientious objectors and were given an exemption from military service in Manitoba during World War II.

A plaque on the wall explains that these men served in the province’s hospitals, mines, remote school districts, lumber camps, national parks and farms during the war learning a new vision for service and peacemaking as a result.

Etched on a rock on the wall are key scriptures from the Bible that support non-violence and pacifism.

Canadian citizens served their country in many different ways during World War II. The memorials in the Winkler Heritage Park recognize this.

Autographs from a Conscientious Objector Camp

Sometimes it is fun to look at my stats for this blog and see which of my posts are the most popular.  In the last couple months these three have hit the jackpot with thousands of views.

What Does Your Mother Do? 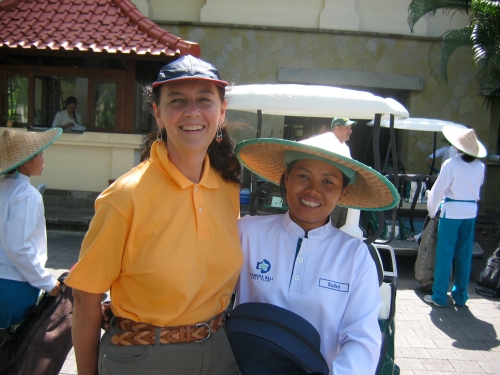 With my caddy at the Nirwana Golf Course in Tanalot Bali

A Prayer for a Golf Tournament

With David in Florence Italy

Next three most popular posts……..

Finding a Family Doctor in Winnipeg

There Must Be 50 Ways to Use A Bison

I photographed these two delightful readers outside the Winkler Public Library last weekend.  Someone had decked them out in scarves.  It was a beautiful fall day and I felt like sliding in beside them on the bench to enjoy the book I had brought along. 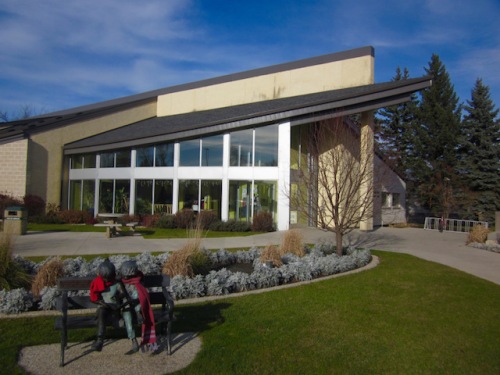 Instead I went into the spacious and welcoming library to work on a writing project while I waited for my husband Dave who was in Winkler for a choir rehearsal.

The statue in Winkler reminded me of a little art piece I have sitting on my book shelf. I bought it from Evelin Richter when I was on an art tour in the interlake a few years ago. It is called Nose in a Book.

In 1963 enjoying a good book in on the couch

Dave reading in a hammock in Fiji

and this one of my husband Dave reading in a hammock in Fiji. 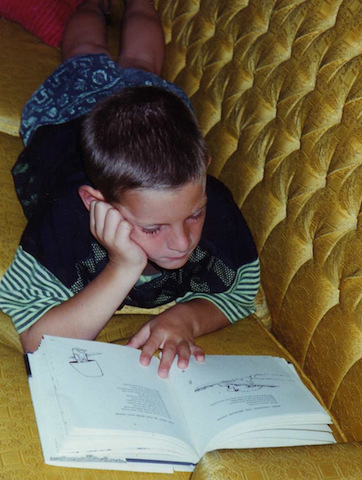 and another of my son engrossed in a book at our family’s Moose Lake cottage.

Ah the pleasures of a good book, so good it can be enjoyed anywhere!

The Wave- Art in the Interlake

A Flood of Books

A Different Kind of Snow Angel

We had our first snow in Winnipeg last night and it made me think of this art piece Snow Angel I saw in the Musée de la civilisation in Quebec City. It is by Karine Giboulo and shows a child playing in a garbage dump in Mumbai where her family sorts different colors of plastic to sell and make a living. Artist Giboulo says, ” What could be more common to North American children than making a snow angel? But the image takes on a whole other meaning when juxtapositioned with the reality of children working among the refuse in Mumbai.”

Co-Creation at the Art Gallery

He’s from Winnipeg and he’s receiving an international award for his life time of work researching, critiquing, writing about, teaching about, and creating children’s literature.

On November 12, I attended a distinguished lecture by Perry Nodelman a University of Winnipeg Professor Emeritus. Perry is one of my colleagues in the education department at the Winnipeg Art Gallery.  He was being recognized by the university because he is the 2015 recipient of the Brothers Grimm Award presented by The International Institute for Children’s Literature. You can learn more about Perry’s long list of accomplishments in the field of children’s literature here.

Perry’s lecture last week traced the history of children’s picture books in a very personal way as Perry compared his own experiences with picture books as a child, with those of his children and grandchildren. 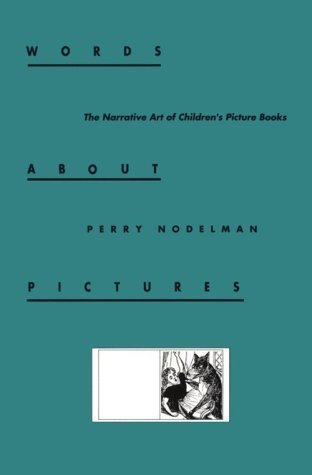 In 1998 Perry wrote a text about children’s picture books called Words About Pictures: The Narrative Art of Children’s Picture Books. It has never been out of print during the ensuing twenty-seven years, a rarity for a university text. In his lecture Perry talked about how he might expand the ideas in Words About Pictures  if he was writing his text today. What developments in the world of children’s books would he address?

It was clear from the former colleagues of Perry’s who introduced him and thanked him at the University of Winnipeg reception in his honor that he is indeed a ‘giant’ in the world of children’s literature and most worthy of the award he will receive in Osaka, Japan later this month. His lecture gave me some interesting things to consider as I continue my own journey in the writing of children’s books.

They Remembered the Books

Tagged as Before and Beyond words, brothers grimm award, osaka, perry nodelman, university of winnipeg 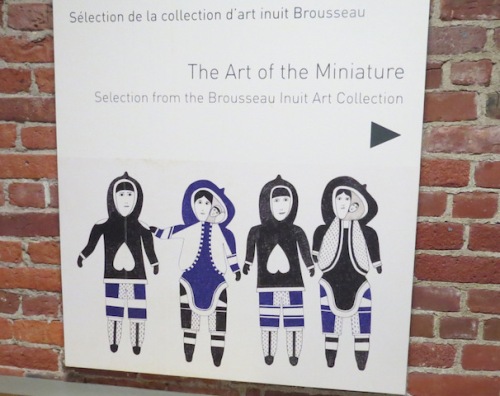 How fun!  The idea of art galleries where people of all ages are invited to engage in creation is something Nina Simons champions in her book Participatory Museums. I saw exciting evidence of this at the Musée national des beaux-arts du Québec. Look at the interactive invitations given to children in the Inuit art section. 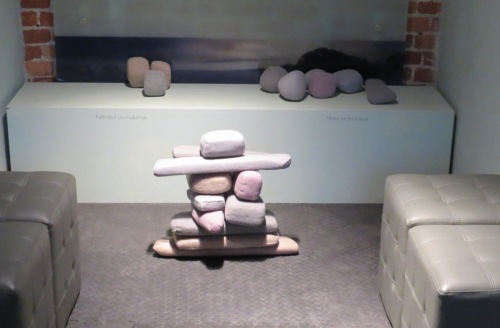 Build an Inukshuk out of pillows 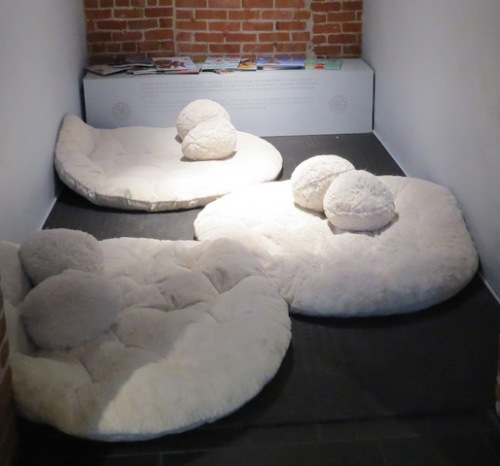 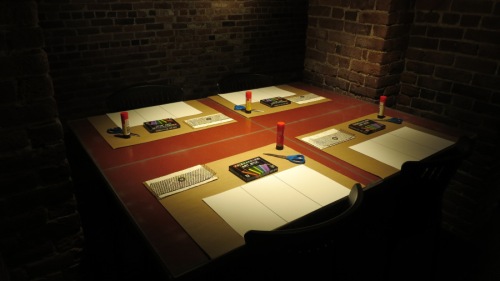 Or make Inuit art prints at these art stations

According to Nina Simons a participatory art gallery or museum is one where visitors create, share, and connect with each other around content. That is certainly happening at the Musée national des beaux-arts du Québec.