Those Who Went to War and Those Who Didn’t

They had very different beliefs about what it means to be a peacemaker and serve your country. Last weekend we drove out to Winkler and my cousin Al took us to see a history park in the community’s downtown.

Since Canada had just celebrated Remembrance Day the cenotaph in the park which honors Winkler’s war dead was covered in wreaths.  The memorial contained only a handful of names. Perhaps this is because Winkler was primarily a Mennonite town during World War I and II,  so not many citizens volunteered or were conscripted into the military. A key distinguishing tenet of the Mennonite faith is pacifism. Those who did not participate in military service because of their religious beliefs are also recognized in the park in a memorial directly across from the cenotaph. 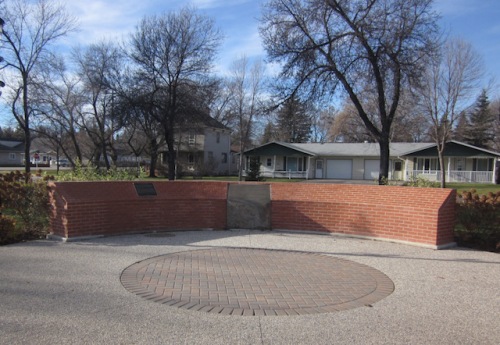 This wall contains 3021 bricks because that is the number of people who were religious conscientious objectors and were given an exemption from military service in Manitoba during World War II. 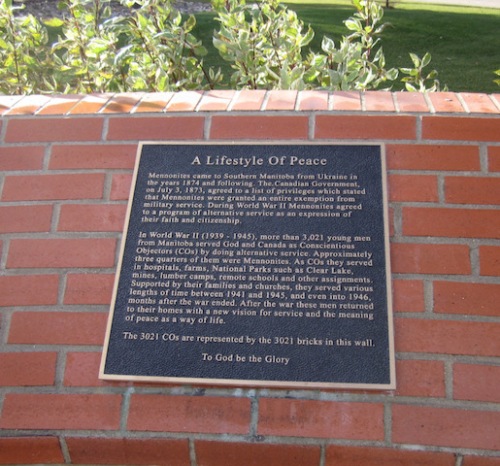 A plaque on the wall explains that these men served in the province’s hospitals, mines, remote school districts, lumber camps, national parks and farms during the war learning a new vision for service and peacemaking as a result.

Etched on a rock on the wall are key scriptures from the Bible that support non-violence and pacifism.

Canadian citizens served their country in many different ways during World War II. The memorials in the Winkler Heritage Park recognize this.

Autographs from a Conscientious Objector Camp