Getting to Know Kevin Chief- My MLA 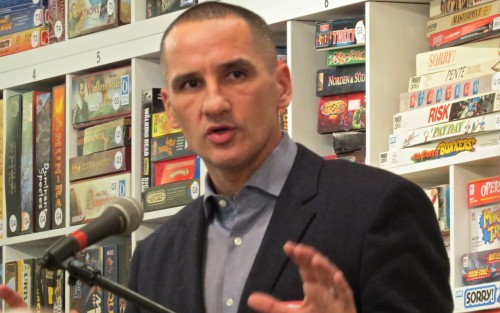 Kevin told us his growing up years hadn’t been easy but he succeeded because all along the way he had people who looked at him and saw potential, who made him believe anything was possible.  Kevin played basketball for the University of Winnipeg and he talked about a lesson he learned from his coach Bill Wedlake. The coach told him it was okay to make mistakes as long as he was making mistakes while trying to get something done.

Something interesting I learned about Kevin at our meeting is that Kevin is a square dancer. He is married and has two sons and the youngest is teething so he’s been keeping Kevin and his wife up at night.

Kevin talked about his experience going into schools to read to kids during I Love To Read month.  He says it is important for kids to have good role models. He told us being truly generous means giving of that which is most important to us. For most people what is most important is their time.  Kevin encouraged us to volunteer our time to engage with our community to make it a better place. Winnipeg has a 29% child poverty rate so there is lots of work to do.

Kevin told us that the Exchange District where we have our homes, is a very exciting area of Winnipeg, where all kinds of innovative things are happening. More people than ever before are living and working downtown. It was good to hear Kevin say that he realizes he needs to have a strong relationship with city government if he is to represent the people of his riding properly.

Perhaps the most difficult question Kevin was asked was about the recent differences within the NDP provincial caucus. A number of cabinet ministers have challenged the leadership of Greg Selinger and have since resigned from their cabinet posts.  “Can we still have confidence in the government?” someone wanted to know.

Kevin was honest in saying things have been tough the last while. But he wanted us to know that despite whatever was going on in party politics he was as committed to his constituents as ever.  “I still go to work everyday and try to get things done for you,” he assured us.  Political tension not withstanding Kevin said he is not wasting a minute in continuing to work hard for the people who elected him.

I was impressed with Kevin’s positive attitude and his openness. He encouraged us to contact him with our concerns at any time.  He wants people to feel like “they belong” in Point Douglas.  I agreed wholeheartedly with his assertion that if people invest themselves in their neighborhoods and communities their neighborhoods and communities will thrive.

Other posts about Point Douglas……

Who To Vote For In Point Douglas

Tagged as across the board, Kevin Chief, point douglas, residents of the exchange

One response to “Getting to Know Kevin Chief- My MLA”