Living In An Art Gallery

Winnipeg is a breath away from Canada’s heart. I live at the city’s center in The Exchange District. In 1887 when wheat was prairie gold, savvy entrepreneurs organized a grain exchange and turned this area into a thriving business district. We own a condo in a century old warehouse built by hardware merchant and Winnipeg mayor James Ashdown.

Many of the Exchange District’s corporate residents have been devoted art patrons, so our streets are studded with larger than life public art pieces. I see three when I walk out my front door.

Straight ahead eleven massive caribou ford a river. A trio scales the steep bank while the others battle for their lives in the rushing water. Their antlers sprawl like bony tree branches in silhouette against the downtown skyscrapers. The sculpture Seal River Crossing by Peter Sawatsky reminds me that my city stands on land that was once home to thousands of wild animals.

To my left is a family leaving Scotland to come to Winnipeg in 1800 after landlords have confiscated their farm. The father’s chest is bare and he looks forward, a hand on his son’s shoulder. The mother’s dress blows in the wind and she looks back, clutching a baby to her chest. The family will travel to Canada in deplorable conditions on a ‘coffin ship’ with sharks following behind waiting for bodies to be thrown overboard. Gerald Laing’s monument The Exiles reminds me of the courageous men and women who founded my city. 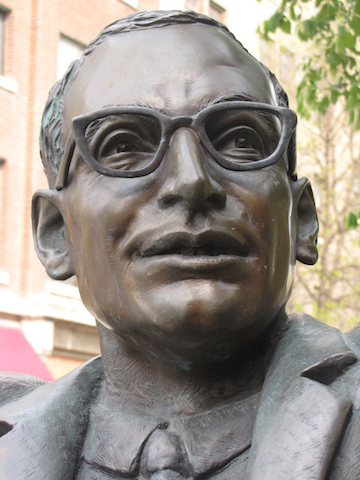 An adjacent street is named after a Hungarian orphan whose family was gassed at Auschwitz. His statue stands near the front door of the first regional theatre in Canada. He was its founder. Adopted by a Winnipeg family in 1947 John Hirsch became a theatrical genius recognized throughout North America. Imagine, Ruth Abernathy’s bronze likeness of him, reminds me of the exciting contributions made to our city by millions of refugees who’ve been welcomed here from around the world.

I make my home in Winnipeg’s Exchange District. It’s like living in an art gallery that brings history to life.

One response to “Living In An Art Gallery”