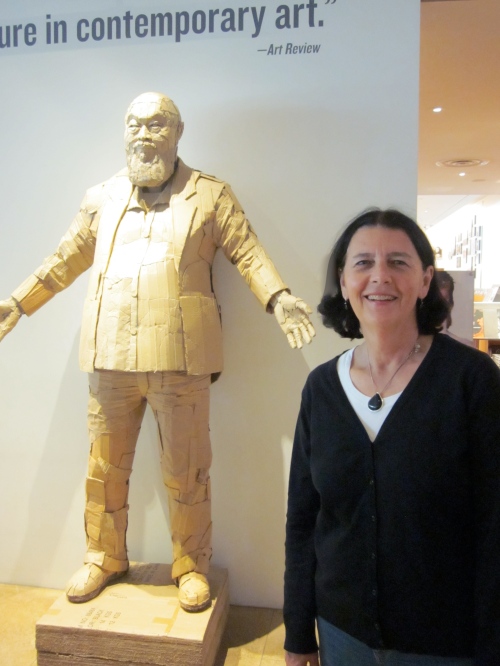 On our recent visit to the Art Gallery of Ontario, I was intrigued by the work of Chinese artist Ai Wei Wei. 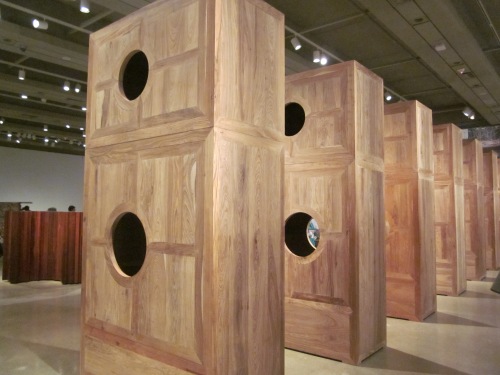 These huge cabinets are called Moon Chests. It’s a set of three-meter high wood cases with two large holes on each side. They are made from huali wood, often used in Chinese furniture, and were built with an ancient technique that uses no additional joining materials. 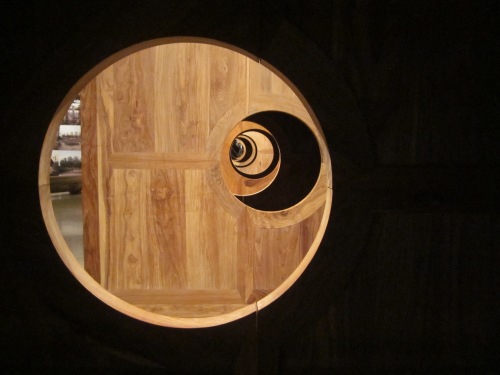 If you look through the holes you can see eighty phases of a lunar eclipse. This was my favourite piece even though it seemed to be the only one in the exhibit that didn’t scream an overt political message. 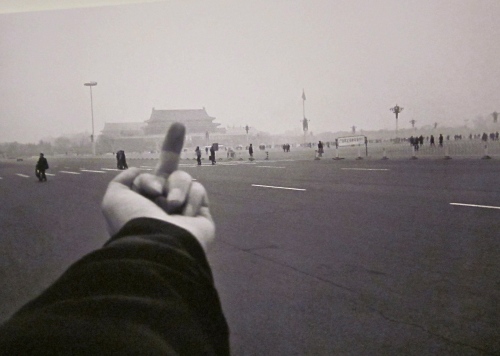 In this famous photo, the artist gives the finger to Beijing’s iconic Forbidden City. Work like this is probably why Ai Wei Wei’s passport has been seized and he is not allowed to leave China. 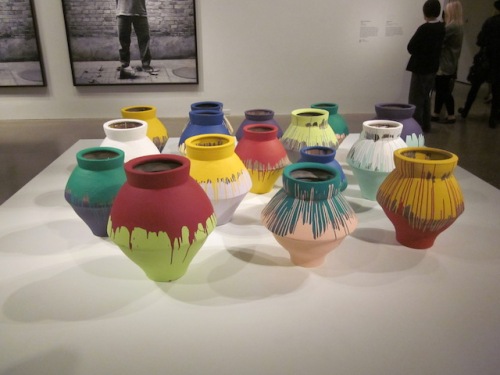 He’s making another rather obvious political statement by covering these Han Dynasty Pots that are more than 2000 years old with bright industrial paint. They remind viewers of the wholesale destruction of artefacts from China’s past during the Cultural Revolution.

That same message is echoed in this series of photos where he drops and smashes an ancient piece of pottery and in this one……. 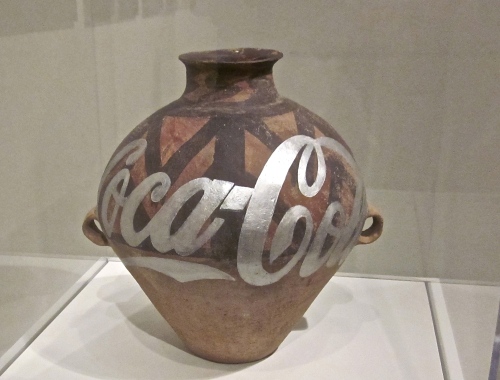 where he decorates a pot with the Coca Cola logo to show how globalization is changing China, making its history of less value and perhaps hinting at some of the health concerns created in China because of globalization. 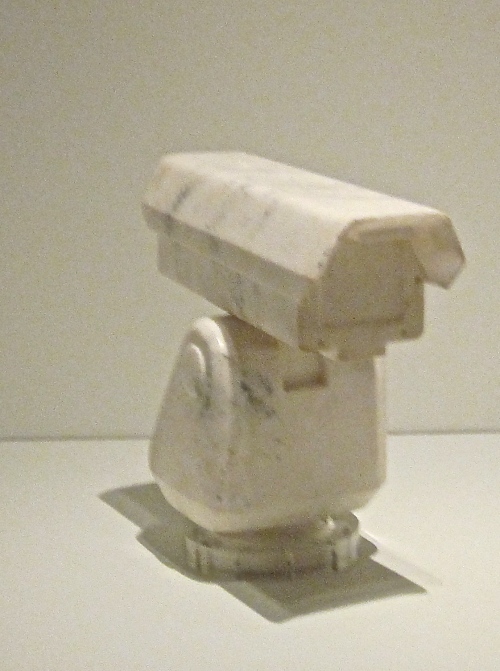 Here’s a marble replica of the surveillance camera the Chinese authorities placed outside Ai Wei Wei’s studio after he launched a protest because the government wasn’t releasing the names of the children who died in poorly constructed schools during the Sichuan earthquake. It’s a commentary on the state’s paranoia and its need to control its public image.

And these 3,200 porcelain river crabs? They were created to protest the destruction of Ai Wei Wei’s Shanghai studio in 2010.  He held a feast where people ate 10,000 of the crabs. Apparently the Chinese word for “river crab,” is a homophone for “harmonious” in Chinese, and has become an internet term for online censorship. 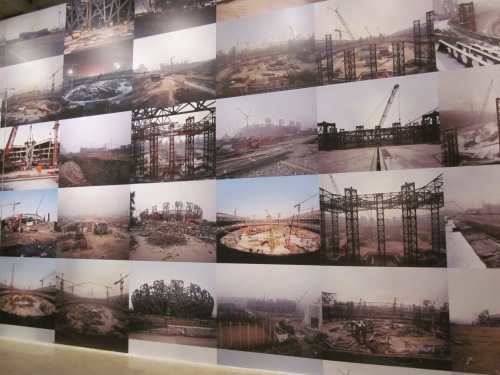 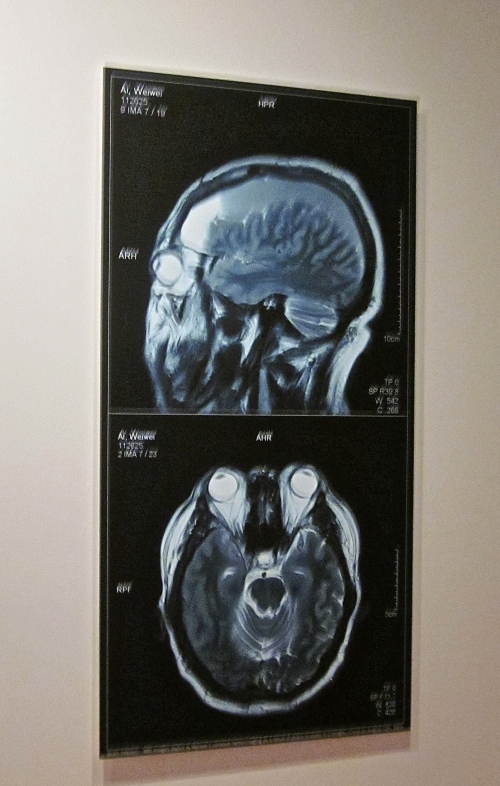 Called Brain Inflation this piece shows the x-ray of Ai Wei Wei’s head that was taken to determine the physical damage he suffered when he was beaten by Chinese authorities prior to his arrest and imprisonment in 2009 after launching his campaign for more information about the Sichuan earthquake victims. 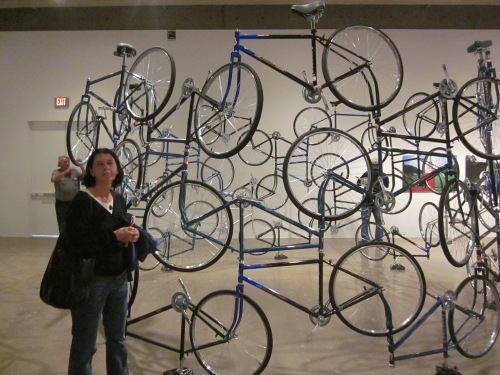 Forever Bicycles made from discarded bicycle parts is said to be a commentary on the degree to which people in China have discarded their bikes in favor of cars. 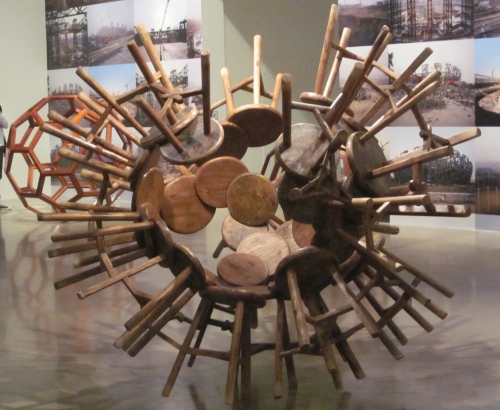 In Grapes he’s taken stools from the Qing Dynasty and reassembled them to look like a bunch of grapes thus turning functional furniture into a non-functional art piece. 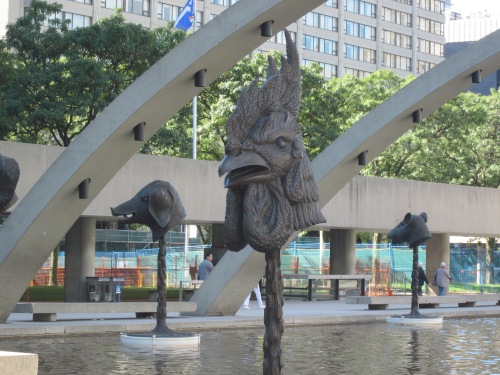 We were attracted to the Ai Wei Wei exhibit by these zodiac animals he created that were on display in Nathan Phillips Square in downtown Toronto. 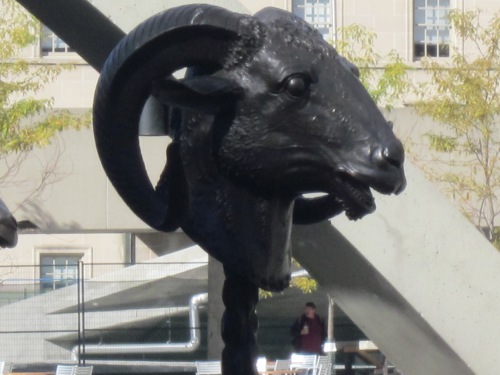 We were curious as to why they would be featured so many months before the celebration of the Chinese New Year so we asked our tour guide. 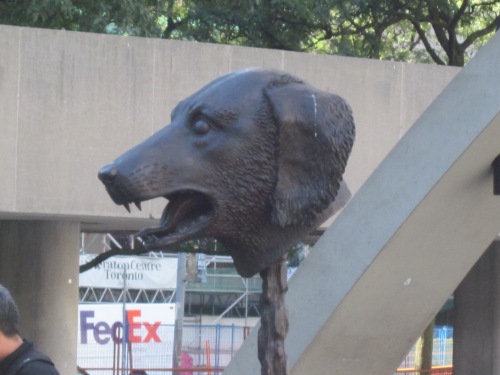 He told us about the Ai Wei Wei exhibit at the AGO.

Other posts about China you may enjoy………..

Remembering the Children of Sichaun