This portrait of Caroline Fitzgerald by Edward Burne-Jones so intrigued me when it was on display at the Winnipeg Art Gallery that I decided I had to know more about the young woman with the serious face it portrayed. What I discovered was fascinating. 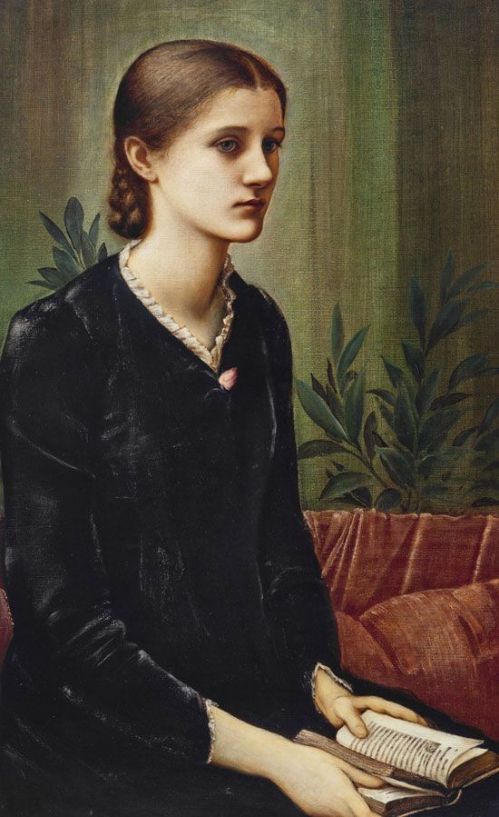 Caroline was nineteen years old in 1887 when her portrait was done by artist Edward Burne-Jones.  Two years later she became engaged to Lord Edward Fitzmaurice.  He was a member of the British aristocracy and Caroline was one of many rich American girls who became saviours for struggling British families who needed to augment their depleted incomes with the dowries of wealthy wives. The American families in return liked the idea of being connected to the British nobility.

In this case, Caroline was considered fortunate to be marrying Lord Edward because his brother’s wife was the daughter of one of Queen Victoria’s cousins, thus giving Caroline and her family a somewhat distant, but still easily traceable connection with the royal family.

I was able to find an article about Caroline’s engagement in the New York Times, July 10, 1889 paper and the headline read  To Wed A Lord.  Caroline was 21 at the time her upcoming marriage was announced, while her fiancée was 43.  The article mentioned she was one of many American girls who would be wed to British nobility during the upcoming social season.

I was unable to find a photo of Caroline’s future husband but did find a cartoon of him which appeared in Vanity Fair magazine with the caption “He doesn’t underestimate himself.”

Edward doesn’t seem to have been the nicest man.  An October 24, 1909 article in the New York American called How Titled Foreigners Catch An American Heiress  warns American girls about scheming, heiress hunting European men and gives Lord Fitzmaurice as an example of one such villain who “shut his wife up in a gloomy house.”

Poor Caroline.  Her engagement notice tells us she was well-educated and accomplished. She graduated from Yale College, the predecessor of Yale University, and was well-known in literary circles for her poems, translations and classical scholarship. She was a member of the American Oriental Society and had studied Sanskrit.

You can see in the portrait she’s holding a book of poetry in her hands. In 1889 Caroline published her own book of poetry called Venetia Victrix and Other Poems. She dedicated it to poet Robert Browning and I found a letter Caroline sent to Robert Browning in August of 1889. It is in the Special Collections Library at the University of Virginia.

Caroline was married to Lord Fitzmaurice for five years and after that was able to obtain an annulment on the grounds that the marriage had never been consummated. Hers was one of three transatlantic unions between wealthy American girls and European nobles that were annulled. Her marriage is sited as an example of ‘gilded prostitution’ in a book of the same name by Maureen Montgomery. Basically, American families were selling their daughters to earn admittance into the British aristocracy, and cloaking (gilding) the act in the aura of respectability with the institution of marriage. Luckily some happiness was in store for Caroline.

Photograph of Caroline Fitzgerald taken in Florence by Mlle Angiolini

She went to Italy and in Florence, a young German archaeologist named Georg Karo fell in love with her. She enjoyed his company and that of his family.  Georg introduced her to the joys of cycling.  Caroline loved the culture and people of Italy. She worked together with Sir Frederic Kenyon on a book of letters by Elizabeth Barrett Browning, visiting Elizabeth and Robert’s old haunts and was able to meet their son. The book was published in 1897.

In 1898 she met Filippo De Filippi a doctor, accomplished mountaineer, explorer, geographer, and writer.  They married and lived in a Tuscan villa nestled in the slopes above Florence. She travelled with her husband to many places including Russia, Turkestan, and the Caucasus. An article in the Geographical Journal which calls Fillippo one of the foremost travel writers of his time talks about how Caroline explored the Orient with him. Their journey resulted in a highly descriptive travel journal that in particular gives a detailed account of the life of the Russian aristocracy before the Revolution. Looking up Filippi’s writings online I found that many of them list Caroline Fitzgerald as the English translator. They must have worked closely together.

Sadly Caroline died in 1911 in Italy but not before she’d had many adventures with her second husband. He said after her death, “my life is broken and has lost all significance.” Obviously, he must have really loved her. I’m glad Caroline was able to find some happiness after her disastrous first marriage. 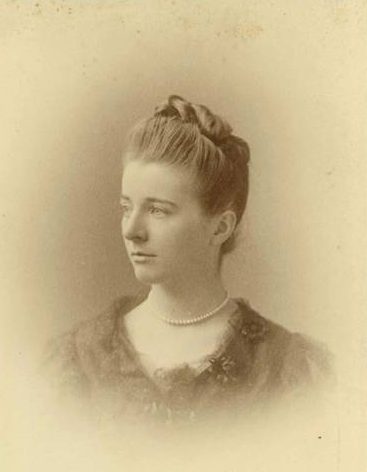 Caroline’s portrait by Edward Burne-Jones belongs to the University of Toronto and was given to them by her brother Augustine’s widow. Caroline’s family did have some Canadian connections. Her father William John Fitzgerald was a member of the first class of students at Upper Canada College in Ontario.  He went to study law at Trinity College in Dublin and returned to Toronto to practice.

In the 1860’s he moved to New York City where he married Mary A. White, the daughter of a rich merchant. They had three children. Their eldest was Caroline and she had two brothers Augustine and Edward. Caroline’s parents maintained homes in both New York and London, England. Interestingly, Caroline’s brother-in-law from her first marriage, Henry Fitzmaurice was once the Governor-General of Canada.

Just one more footnote. The Burne-Jones portrait of Caroline appears on the cover of a historical crime novel published in 2004 called Death In The Age Of Steam.  The Toronto Globe and Mail book reviewer said Caroline’s portrait was perfect for the cover of this meandering story of love and death.

A Tale of Two Portraits