Thai Traditions to End and Start a Year

As we prepare for the end of 2012 and the beginning of 2013 I am reminded of two rituals I participated in during our visit to Chiang Mai Thailand. 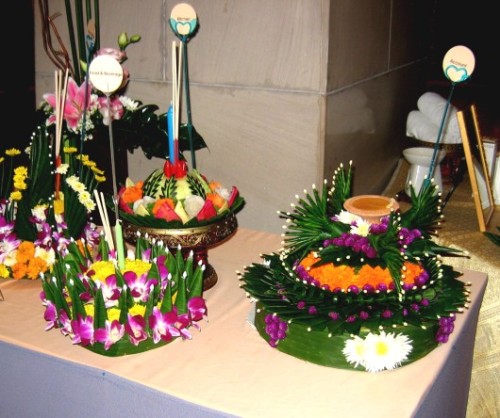 Loy Krathong came first. ‘Loy’ means to float and a ‘krathong’ is a raft. Thai people make little rafts or boats out of banana leaves. They decorate them with flowers and burning incense sticks and set them afloat in rivers. Before you set your krathong to sail downstream you stop for a time to remember all your sin and suffering from the previous year. In your mind you load all those negative and sad thoughts and experiences onto the raft so when you release your krathong you are essentially floating your troubles away. 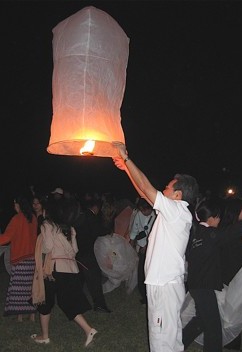 Once your problems from the past are released with your krathong you are ready to make wishes for the future with a khom loi– a large hot air lantern created from rice paper. You light a small burner suspended on a metal brace at the bottom of the lantern and launch it into the sky at the same time as a fireworks display begins its colorful explosions. The khom loi carries your hopes and dreams for the future up to the heavens.

Here is my husband Dave getting our khom loi ready for launching. As the lantern filled with hot air we had a hard time holding it down and finally it just whooshed out of our hands. It got caught briefly in a tall tree. My heart stopped for a minute because I was sure the branches would start on fire, but just then a gust of wind lifted the lantern and it went soaring up higher and higher. We watched it for a long time before it disappeared from sight. 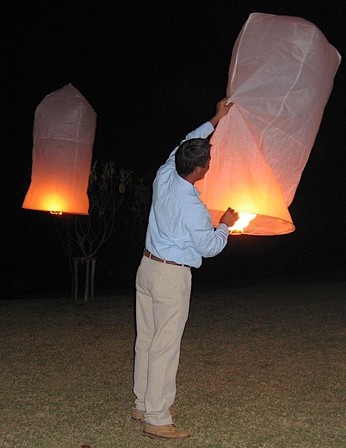 The sky was peppered with hundreds of pinpoints of light as the people around us sent up their lanterns. Then the fireworks started exploding in the black sky. 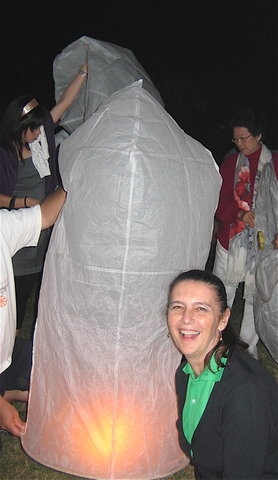 Most of the prayers I sent up with our khom loi have been answered.

The rituals of Loy Krathong and Khom Loi are a meaningful way to reflect on the past year and make plans for the coming one. Although this year I won’t be floating a flower bedecked boat down a frozen Winnipeg river or letting a lantern loose in the middle of a chilly prairie winter I do want to make time to say good-bye to any negativity of 2012 and welcome 2013 with joy and hope.

And So This is Christmas and What Have You Done