Marijuana, monarch butterflies, a Manitoba hero and movie magic! I’ve been learning about them all. I am supervising university education students practice teaching in elementary and junior high classrooms. They are doing such a variety of lessons and I am learning so much from them. Here are just eight of the dozens of cool things I’ve learned in the last couple weeks.

“Bioluminescence” I whispered loudly to my husband poking him during the movie Life of Pi. He wasn’t too happy with me interrupting his film watching experience but I was excited. I had just learned about bioluminescence in a grade eight science class and knew that what I was seeing on the screen was bioluminescence; the production of light by a living organism caused when a chemical in an animal’s body reacts to oxygen.

Did you know Qatar, the country where 200 nations are meeting this week to discuss global warming has the highest per capita emission of green house gases in the world? I learned this in a junior high social studies lesson about the impact human beings have on the environment.

I didn’t want to believe it but monarch butterflies are poisonous! A grade one class was studying the life cycle of the monarch butterfly. I discovered monarchs taste terrible and are poisonous due to the presence of a steroid in their bodies which they ingest as caterpillars when they feed on the milkweed plant. Their poisonous taste provides them with protection from predators.

“60% of all human communication is non-verbal body language. 30% is your tone, so that means 90% of what you’re saying ain’t coming out of your mouth.”

This quote is from a speech Will Smith makes in the movie Hitch. I was visiting a junior high drama class and the students were presenting monologues. Several boys did a monologue from the movie Hitch that included this quote. Smith plays the role of a professional dating advisor and tells his client that communicating with women is far more subtle than just what you actually say to them.

I wasn’t surprised to learn alcohol is by far the most common addictive substance used by Canadian teens. I was surprised cannabis and not tobacco was second on the list. Cannabis is the number one illicit drug used by Canadian youth. Marijuana use is more common than cigarette smoking among junior high and high school students. I learned this in a grade nine health class.

I’m almost embarrassed to admit I didn’t know the smallest part of a pattern that repeats itself is called the core. I learned this during a math lesson in a nursery school and kindergarten class.

One of the schools I visit was kind enough to sponsor a luncheon for all the student teachers from both universities and their faculty advisors. The principal gave us an inspiring speech in which he told us about the life of a Winnipeg hero I’d never heard of before. Percy Haynes was a noted local musician, a singer and piano player who teamed up with his wife to become one of the city’s most popular jazz acts. He was a gifted athlete; a member of the Winnipeg Stellars Basketball team, the city’s amateur welter-weight champion in 1933 and 1934 and an accomplished fastball pitcher. He was also the first black man to be accepted into the Royal Canadian Navy because he petitioned the Naval Secretary in Ottawa to let him enlist during World War II. After the war he worked for the Canadian Pacific Railroad and was instrumental in improving working conditions for black union members. 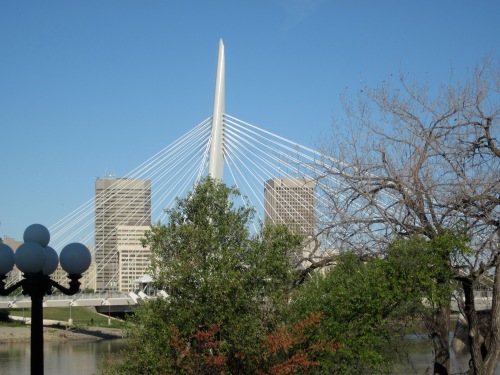 Is that a truss bridge, a cantilever bridge, a beam bridge,  a suspension cable bridge or an arch bridge? Yesterday I was observing a grade seven science lesson where students were drawing blueprints. They were preparing to build models of one of the five kinds of bridges out of newspaper.  Now I find myself looking at bridges in a whole new way!

Bridges, bioluminescence, butterflies, a conference on global warming, a local hero, teen drug use, non-verbal communication and math pattern terminology. I learned about them all just by visiting three Winnipeg schools. There are lots of exciting things being taught to Manitoba’s young people. I can hardly wait for my next round of visits!