The Tigers Met The Yankees And We Were There! 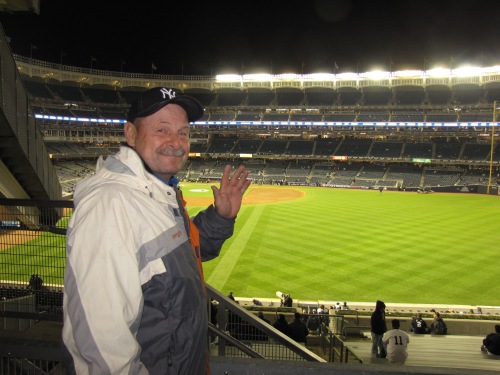 Does my husband Dave look happy?  Well he certainly is in this photo! Our first night in New York the Yankees baseball team beat Baltimore to advance to the American League Playoffs. And guess whom they were going to be playing Saturday night at Yankee Stadium? The Detroit Tigers!
Dave has been a Tiger fan all his life. He grew up thirty- five miles away from Detroit in Leamington, Ontario. It was a tradition for his family to make an annual trip across the border to watch a Tiger game. It was a tradition we carried on with our own sons on our yearly summer visits to southern Ontario.

As soon as Dave knew the Tigers and Yankees would be playing on Saturday night in New York he went on the internet and bought tickets for us. We headed off for Yankee Stadium on the subway arriving well before the eight o clock first pitch. Dave wanted to get there early enough to watch batting practice.

It was a cold night so we dressed warmly! 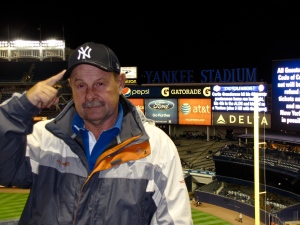 Dave bought a new New York Yankees hat so he would fit in with the local crowd. During the game he tried to keep his cheering for the Tigers fairly quiet and low-key so as not to antagonize the Yankee fans all around him.

Of course you can’t go to a ball game and not have a hot dog so we each enjoyed one before the game .

In Yankee Stadium all the food and beverage stands have a calorie count listed beside every item for sale on their menus. Even the vendors selling in the stands wore large buttons telling customers how many calories there were in their product whether it was a beer or cracker jack. I guess posting calorie counts is part of the American war on obesity and it will probably work. Knowing a bag of peanuts had over a thousand calories definitely made me think twice about buying some.

Before the game each of the Yankee players came up on the big screen to personally welcome us to the game.

While she sang a group of American military personnel unfurled this enormous American flag on the baseball field.

It was an important play off game but the stands in Yankee Stadium were half empty, which seemed kind of strange. Maybe it was too cold for most Yankee fans.

The Yankees really didn’t give the crowd much to cheer about. At the end of eight and a half innings the Tigers were ahead by four runs. When the Yankees had two outs we figured the game was almost over so we decided to leave the stadium since it was already after 10 o’clock. Unless we wanted to pay for a $50 cab ride we had to take the subway and then walk quite a number of blocks back to our bed and breakfast in Harlem. We had been told this was a trip best not made too late at night.

Don’t you think a couple of two- run homers just after as we were walking away from the stadium meant the score was tied? Luckily we got back to our bed and breakfast on time for Dave to watch the end of the game on television as his Tigers pulled out a win in the 12th inning. My favorite thing at the game was the Fan Cam where they turned the cameras on the fans and projected them on to the big screen above the playing field. I loved the look on people’s faces when they realized everyone in the stadium could see them.

Although we never made it onto the Fan Cam we still had a great time at Yankee Stadium. By the way the next afternoon while we were on a boat out to see the Statue of Liberty the Tigers won again putting them ahead by two games in the series. GO TIGERS!

Baseball in his 60th Year