The dog ate the cabbage rolls and the tablecloth started on fire but other than that it was a pretty ordinary Thanksgiving celebration! Dave and I are in southern Ontario spending a few days with our extended Driedger family. 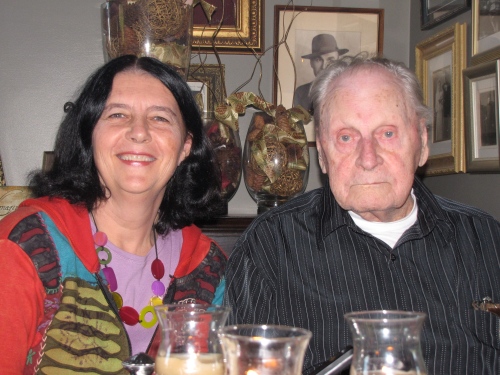 In the late afternoon on Thanksgiving Monday, we picked up my father-in-law from the long-term care facility where he is a resident and headed for the home of Dave’s brother John and his wife Linda who were hosting the family Thanksgiving meal.

My sister-in-law Linda set a beautiful table with spots for all twenty-three of us. John and Linda’s house looked like an autumn fairyland. There were baskets filled with multi-coloured squash, a fire blazing on the hearth, fall leaves trailing over the mantelpiece and counters, brown, orange and green candles burning everywhere and many vases filled with fall flower arrangements.

Unfortunately just before the main course was served one of the candles set the faux autumn leaves in a centrepiece ablaze and only the quick work of Dave’s brother Bill and nephew Justin managed to save the day, extinguishing the flare before it had a chance to do serious damage to the finish on the antique table. 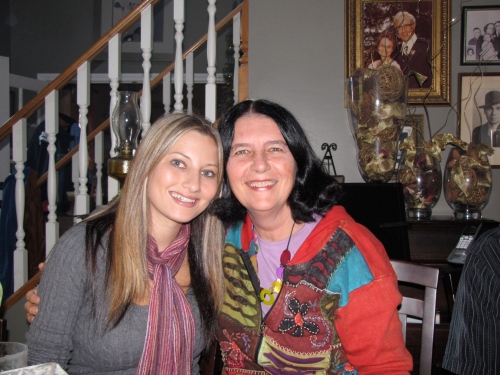 MaryLou and our niece Grace

Before we ate dinner my brother-in-law John asked us each to say what we were thankful for. I can’t remember them all but I do remember……

Before we ate we sang Praise God From Whom All Blessings Flow and then held hands to sing Johnny Appleseed. The great-grandchildren recited the German prayer Segne Vater and then Opa said grace. 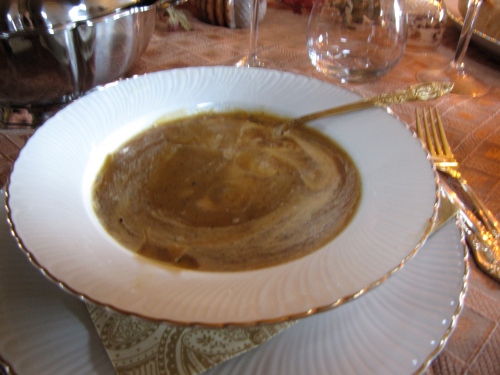 Emma with a whipped cream moustache from the pumpkin tarts

Once the table had been cleared after dinner the kitchen counters were full of all our dirty dishes, so my sister-in-law Shirley set her roaster with the left-over cabbage rolls on the front porch to take out to their car later. As the troop of family football players came back inside they noticed that John and Linda’s bulldog Stogie had managed to nudge the tin foil off the top of the roaster and was eating the cabbage rolls. Shirley went to rescue the cabbage rolls and put them in the car. Since she couldn’t find her husband Paul who had the keys to the car she simply set the roaster on the car roof. Later Paul discovered a cat who had crawled up onto the car roof and he too was enjoying the cabbage rolls. That took care of the left-overs.

Dave and our niece Hannah at the Thanksgiving table

After dinner, there was lots of visiting and an impromptu game of football on the front yard which Dave participated in.

We hadn’t had a chance to spend Thanksgiving with Dave’s family for a very long time. We were thankful that this year we could be part of the celebration.