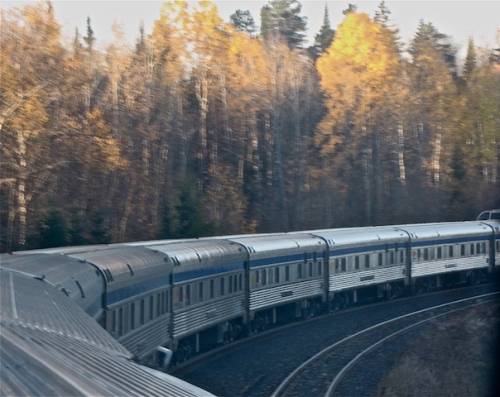 “We’re just shacking up”,  the elderly couple told us cheerfully. “If we get married I lose my late husband’s $1200 a month pension and I can’t bring myself to do that”, said the woman. A couple from the American south was just one of our interesting table partner pairs for the four meals we ate on the VIA Rail train that took us to Toronto this week. Each couple was about 15- 25 years older than us and had an interesting story to tell. The couple that was “shacking up” were motorcycle and travel aficionados who had been married to people who didn’t like to go on trips.  When their respective spouses passed away they met each other at a social evening organized by the Catholic Church and it didn’t take long before they were discovering North America together. She had one daughter who lived abroad and he had one daughter who was in a supportive care home due to a chronic illness. The man and woman had helped each other be much less lonely and were delighted to talk about all their adventures together.

A former high school volleyball coach from Winnipeg who had played competitive fastball in his younger days was another table partner along with his wife, a former social worker. The man’s high school athletics and fastball involvements meant he and my husband knew many of the same people since Dave coached high school sports for most of his career and played fastball for nearly two decades. Our meal companion even knew quite a few of the men who were on the Eastman Slow Pitch team which Dave played for this summer. They kept finding more and more common connections and sharing stories so our time at the table extended to over an hour.

We shared the breakfast table our first morning with a couple from a southern Ontario town who were celebrating their 60th wedding anniversary by taking the train across Canada.  Their kids wanted to stage a banquet or host a tea at their church but they refused. They said they would much rather travel. They had been to Victoria where they had rented a house with a glorious view of the ocean and had visited the man’s twin sister whom they hadn’t seen in years. They were anxious to get home now and filled us in on all the gossip about the interesting people in their neighborhood.

Another Ontario couple who traveled frequently to visit their grandchildren in Calgary and California were the fourth couple we got to meet. He was a retired Presbyterian clergyman and his wife had been a nursing home administrator. The former pastor told us he’d written his masters thesis about the introduction of organs into Canadian Presbyterian churches in the mid 1800’s, a move that was widely frowned upon by some as being too ‘worldly’.  He said there was one congregation whose organ had been covered in molasses by protesters who thought organs had no place in Protestant churches.

Interesting meal companions, reading books and magazines, journaling and writing,  playing cribbage and Scrabble, napping, enjoying the flaming fall colors and even a wine tasting event made the thirty-six hour train trip from Winnipeg to Toronto go by quickly.

Tagged as interesting people on the train, traveling from Winnipeg to Toronto by train, via rail meals, via rail trip