Next month my Mom and Dad will celebrate 60 years of marriage. I’ve spent quite a bit of time in recent weeks compiling their life story in photos to share at their anniversary party. One section of the presentation is about their courtship.

Mom and Dad met each other when they were students at Canadian Mennonite Bible College (now Canadian Mennonite University) in 1950. Mom came to college from her parents’ farm just outside of Drake, Saskatchewan and Dad from his parents’ farm in Gnadenthal, Manitoba. Both Mom and Dad had been teaching public school for a couple of years to save up enough money for college.  They were on the college student council together. Mom is the secretary and Dad is standing and leaning over her shoulder.

Mom shown here conducting some of her fellow students was very involved in music at college. She played violin and piano and sang in an octet that went touring around the country giving concerts in various churches.

Dad was on all kinds of committees. He was a member of the literary society, organized community socials and is shown here standing in the back row on the right holding a copy of the school newspaper which he helped to publish. 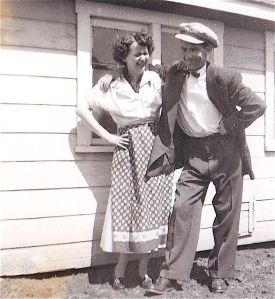 Mom says she was attracted to Dad because he had such a good sense of humor and made her laugh. He was also very popular with his classmates. 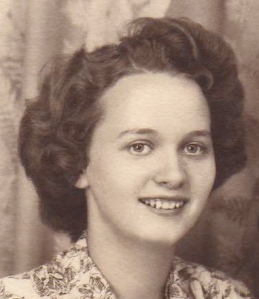 Dad says he was attracted to Mom because she was so pretty and he admired her musical talents. He also liked it that she came from a close family like he did.

On their first date they went bowling and then to a coffee shop on Broadway with their friends Irma and Norman. Many dates like this picnic followed. Eventually they went to each other’s homes and met one another’s families. 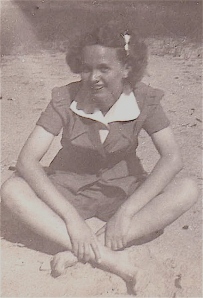 The day they got engaged they first went to the beach with their friends.

They packed a picnic lunch. That evening when they got back to Winnipeg they dropped off their friends and drove to Assiniboine Park which is where Dad proposed. He was interrupted by the park warden knocking on the window and telling them the park was closing. Dad rushed through the rest of the proposal and Mom accepted.

That summer Mom was working as a nurses’ aide at a hospital in Brandon. Dad went to visit her and give her the ring he had bought at Mitchell Copp Jewelers for $125. In the evening Dad drove the car up onto a hill overlooking the river with all the lights of the city twinkling below. It was here Dad presented Mom with the ring. 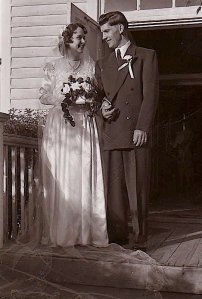 A year later Mom and Dad were married.

2 responses to “My Parents’ Romance”