Pink hot pants and good tips. That’s what I remember about the summer I worked at the Paddock Restaurant. 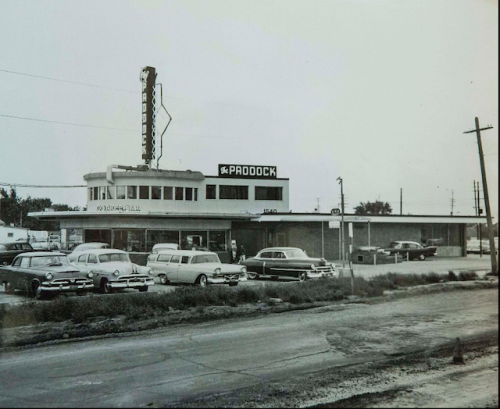 The Paddock’s coffee shop, however, remained a popular hang out for racing fans. They’d come in for breakfast and slip into one of the booths underneath the large bay windows that looked out onto busy Portage Avenue. Over endless cups of coffee and breakfast specials, the racing fans would share information about the day’s races and which horses looked promising. Once they had visited the track they’d drop back in for dessert or a late bite and discuss their wins and losses. If the gentlemen had a good day at the betting window it usually meant I’d get a bigger tip. These fellows also liked to engage in a little good-natured flirtation with the waitresses. I was already married and found by fingering my wedding ring as I took their order and deliberately ignoring their advances I could usually discourage most of them. 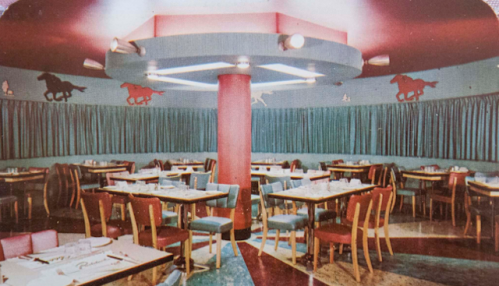 Hot pants were the rage in the early seventies and they were our uniform at The Paddock. The serving personnel was exclusively female. Those of us who worked in the coffee shop were all younger and we wore pink shorts with pink short-sleeved tops. The Paddock also had a dining room that served families. The menu was more extensive than in the coffee shop and the waitresses there were all older women. Several had been working at The Paddock for over twenty years. These women wore blue uniforms. Their hot pants were just a little longer than our pink ones. The dining room had a large mural on the wall and subdued lighting, creating an ambience quite different from the one in the sunny coffee shop.

The Paddock kept a treasure-chest by the front till. Children who ate with their parents in the dining room and behaved themselves were allowed to pick a ‘treat’ from the chest as they left the restaurant. The prizes were plastic jewellery, small metal cars and perhaps a miniature colouring book with crayons. It was a big deal for kids to be allowed to pick a prize from the treasure chest. Parents could threaten them with a withdrawal of that privilege and kids would quickly quiet down and eat. I wonder if that kind of bribery would still work today? 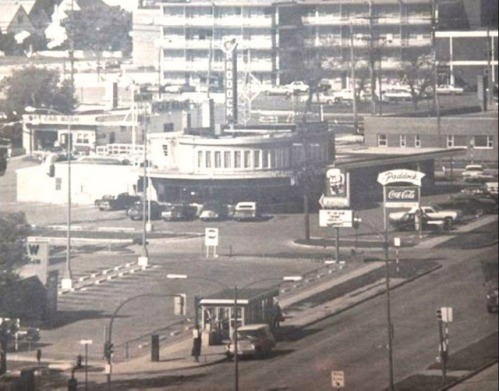 The Paddock in the 1960s. Photo by Rodney Martel.

When I left The Paddock at the end of August in 1974, it was much to the dismay of the head waitress, a large, very tall woman with long jet-black hair she wore pinned up with an Oriental comb. She managed The Paddock waitresses with a firm and experienced hand. She trained us well and hated to have to break in a new server, but I had signed the contract for my first teaching position at Lincoln School and no longer needed my waitressing job.

I wonder if I’d still fit into those pink hot pants?

15 responses to “The Paddock Restaurant”