On Friday Dave and I went to visit my Uncle Herb here in Scottsdale. In a previous post I wrote about my Aunt Mary. She and Uncle Herb live in Arkansas. My uncle was in Phoenix for some appointments and I was glad to have a chance to see him again. My mother told me a story about my Uncle Herb and me just before I left for Arizona. For two years when I was a little girl Herb and Mary shared a house with my parents. On Sundays they went to church together on the bus since neither couple owned a car. My Mom told me my Uncle Herb was the one assigned to carry me on the walk and bus ride to church and he was always happy to do so.

My cousin Charlotte and her husband Tom have a beautiful second home in Scottsdale and that’s where Uncle Herb was staying. We met him in the parking lot as he as returning home from his morning tennis match and we had an interesting chat with his competitor, a woman whose children were teachers in an international school in Singapore. Since we had taught for six years at an international school in Hong Kong there was lots to compare notes about. My Uncle Herb invited us in and gave us a tour of the house.

My aunt and uncle moved to their home in Arkansas while we were living in Hong Kong and we have never visited there, so after treating us to breakfast at a restaurant Uncle Herb showed us pictures of his and Aunt Mary’s large lakeside home and scenic acreage in Arkansas. Uncle Herb and Aunt Mary have three children and seven grandchildren and we also looked at some photos of them as Uncle Herb caught us up on their activities and accomplishments.

Then despite the fact he’d already played a tennis match that morning, my eighty year old uncle suggested a hike through the desert. So off we went. It was a perfect sunny day with a clear blue sky.

What are Dave and Uncle Herb looking at?

This cactus which Uncle Herb says is where an owl will nest shortly. It lays eggs here every year and photographers and media people come to take pictures and do news reports. Uncle Herb says when the mother owl goes out to search for food you can see the father owl nearby keeping watch.

Dave and Uncle Herb both grew up in southern Ontario and Uncle Herb, who is a retired surgeon, is a Mennonite history and genealogy buff so he knows many of Dave’s relatives. They had a grand time chatting about all kinds of things including American and Canadian politics. 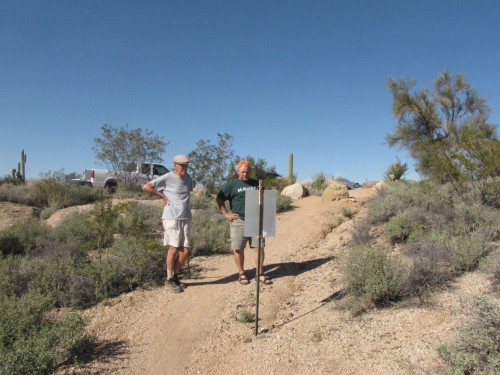 One of the things Dave and Uncle Herb talked about on our walk was how many wineries there are now in southern Ontario. Uncle Herb told Dave about a wine called Charles Shaw which sells for only $2 a bottle. Dave had heard about the wine and said it would be interesting to do a taste test to see if you could tell the difference between $2 wine and more expensive wine. Uncle Herb thought that would be fun and as soon as we got back to the condo after the hike he set up a wine tasting test for Dave using a bottle of Charles Shaw and two other more expensive Merlots from Charlotte and Tom’s wine collection.

Not only could Dave not tell which was the $2 bottle he picked it as the best Merlot. 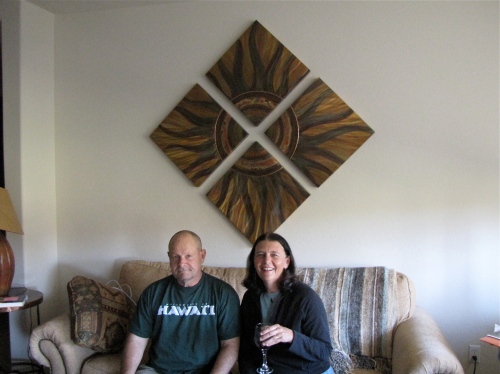 I checked to be sure Dave’s wine evaluations were correct while Uncle Herb who is an excellent photographer took some pictures of us. He sent me this photo as well as several others of Dave and me in this post.

Then Uncle Herb took us to visit the nearby Los Cedros Stables, one of the finest horse training facilities in the world. Huge doors made of cedar from North Africa are open to visitors everyday.

The stables have been built to resemble an ancient Moroccan citadel and are beautifully landscaped. 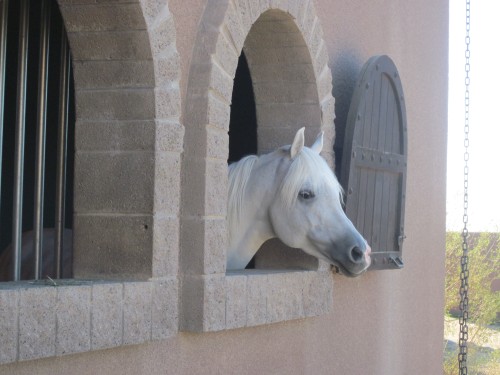 The stalls at Los Cedros all have windows so the horses can look out onto the courtyard. 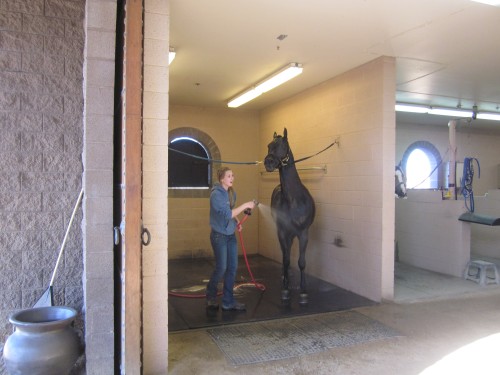 We saw the horses having baths, 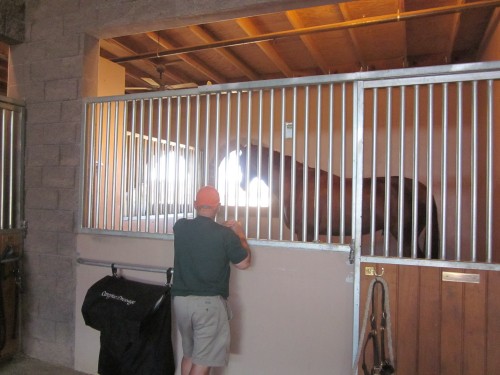 and just hanging around in their stalls. Dave couldn’t believe how huge some of the horses were.

There was a gang of Corgi dogs who also made their home at Los Cedros.

Dave quickly made friends with the Corgis

We’d been having such an enjoyable afternoon that we hadn’t kept track of the time and now we needed to say good-bye because we were off to a concert in the evening. It was so nice to have an extended period of time for a good visit with Uncle Herb. He was the consummate host and we had a great day with him.

One response to “Visiting Uncle Herb”