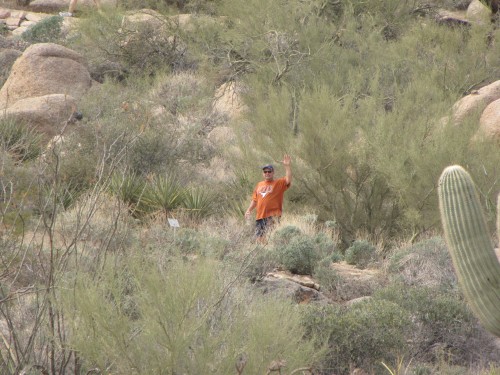 Yesterday we climbed Pinnacle Peak with Paul and Shirley. On Tuesday we left the home of our friends the Nikkels and moved in with Dave’s brother Paul and his wife Shirley, who are renting a condo in Scottsdale. They suggested we hike up Pinnacle Peak. Paul and Shirley had done the hike during their first week in Phoenix and said it provided a good work out.

Several signs we saw as we set off on the hike made it clear that being prepared and aware of possible dangers was a good idea. 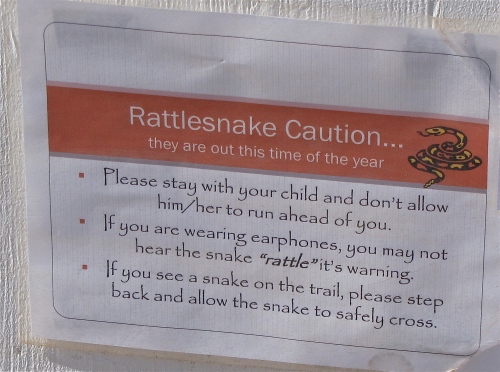 Although a small gecko was the only creature I saw on the hike, according to wild life experts the area is inhabited by bobcats, mountain lions, foxes, coyotes, javelinas, rats,  rabbits, squirrels, gila monsters and many kinds of snakes and lizards.

One thing I appreciated about the Pinnacle Peak trail was that all the different kinds of trees and plants and cactus were labelled. I had been wondering what the names of many of the unique desert plants in Arizona were and I found out on the Pinnacle Peak Trail.

Although it isn’t spring yet in Arizona there were already several different kinds of flowers blooming along the trail including these gold poppies.

The Pinnacle Peak area was where first nations people foraged for plants and animals 5000 years ago. Around 1200 AD it was home to the Hohokam people. Now you can see the legendary Troon Golf Course from the Pinnacle Peak Trail.

The Spanish arrived in the Pinnacle Peak area in the 1500s bringing livestock and agricultural crops. The many elaborate homes that you can see from the Pinnacle Peak Trail have a definite Spanish influence to their architecture.

I wonder if the American settlers who arrived at the base of Pinnacle Peak in the 1800’s to prospect for minerals and start cattle ranches were as impressed as I was by the abundance of saguaro cacti.

The Pinnacle Peak Trail is one and three-quarters mile long, one way and it is not a loop so you go back the same way you came.

Dave and Shirley were the intrepid two in the hiking group. They went the full three and a half miles. My knee was bothering me so Paul was chivalrous enough to turn back with me at the one mile point. He and I only walked two miles.

There was plenty of opportunity to practice Dave’s game of naming rock formations. I thought this one looked like the head of a dinosaur.

Pinnacle Peak Trail is an excellent hike, with great scenery, a well-marked trail and public restrooms, picnic tables and an information centre at its base.

We had a post-hike drink and vegetable and hummus platter on the pleasant outdoor patio at O’ Donoghue’s–the perfect way to end a hike!