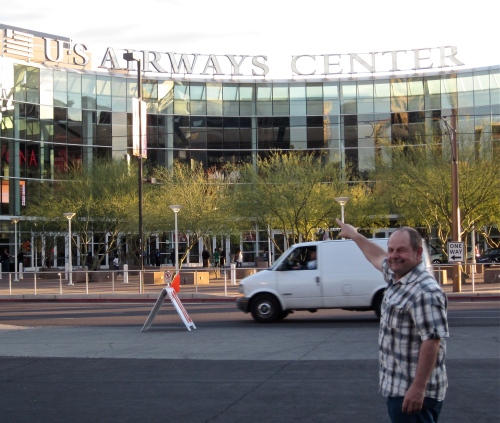 On Thursday night we went to the US Airways Centre to watch the Phoenix Suns play the Cleveland Cavaliers. Dave was excited that he was going to see one of his all time favorite basketball players Canadian Steve Nash or “little Stevie Nash” as he always refers to him play in person for the first time.

Dave wanted to be at the stadium on time for the pre-game warm ups so to be sure we found a good parking spot we went downtown a couple of hours ahead of time and had dinner at Majerle’s Sports Grill right near the Airways Stadium.  We were at the game with our friends Rudy and Sue and my sister Kaaren and her husband Ken. 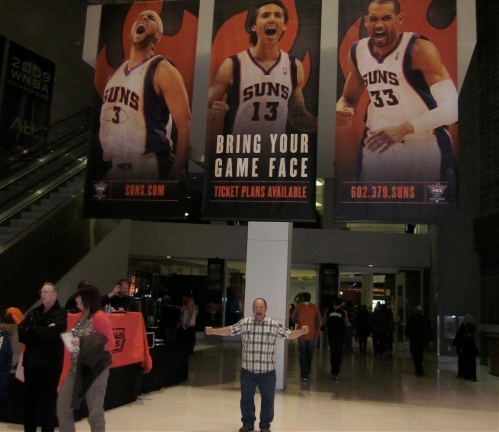 Once we entered the stadium Dave posed under a huge poster of Steve Nash flanked by pictures of other Suns players, Jared Dudley on the left and Grant Hill on the right. 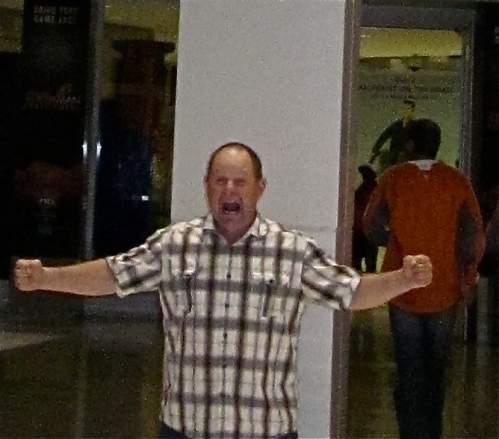 Was Dave excited? You can decide for yourself.

Our seats were pretty high up but we still had a good view of the court. I was surprised that the stadium was less than half full.

I always enjoy watching the food sellers at games. This man had a melodious sing-song jazzy chant, “Homemade lemonade, Just like your mother made. Chocolate Chip and Snickerdoodle Cookies. You KNOW you want them!”

Unfortunately it was not a winning night for the Suns. They lost to Cleveland 101-90.  I am not basketball expert but I’ve watched my boys and Dave play enough that even I could see the Suns’ rebounding was not at all what it should have been. 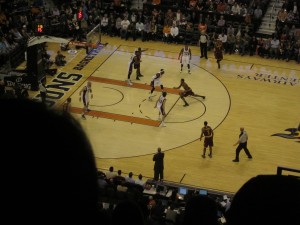 Steve Nash did have a good night. He was the leading scorer for the Suns picking up sixteen points. What I admired was his expert passing. He made so many perfect passes and had 15 assists. The only plus of the Suns being behind in the game is that Steve Nash got more court time than he might normally. Steve’s foul shooting was almost perfect. He only missed one foul shot the whole evening. The other player I enjoyed watching was Michael Redd. He had a number of very nice three-point baskets. It was Redd’s first game with the Suns.  He used to play for the Milwaukee Bucks. 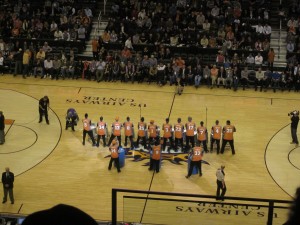 The half time show was good with these garbage can drummers, some gymnasts who jumped on trampolines to do slam dunks on the basket and a girls’ dance troupe that executed an energetic performance in bright red suits. 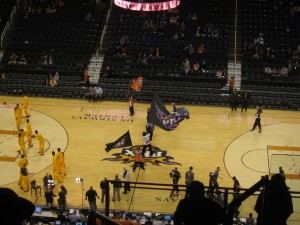 We stayed right till the end of the game. Even though the Suns didn’t win it was good fun to attend an NBA game and watch Dave’s hero Steve Nash in action.